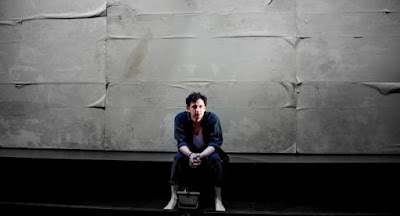 There’s a brilliant moment in the second half of Ellen McDougall’s new production of Tennessee Williams’s Glass Menagerie. The “gentleman caller” arranged by Tom Wingfield (Tom Mothersdale) to visit his disabled sister Laura (Erin Doherty) has turned up, and their suffocating, godawful mother, Amanda (Greta Scacchti), is grandly telling him about her luxury lifestyle back in the American south. Plantations, servants, etc. The gentleman caller, Jim O’Connor, is played here by Kofi Abrefa. While Amanda is telling Jim all this, I’d say that Kofi Abrefa – crucially *not* Jim O’Connor – looks out into the audience and somehow seems to give us a “are you hearing this?” look.

I could have misinterpreted this moment. The actor might well just be playing the character looking at the pretend fourth wall, and making a face while looking at the photograph of Tom and Laura’s absent father and being talked at by their awful mother. But I reckon it’s very pointed and deliberate. It feels like an otherwise flawless bit of “colour-blind casting” has also here been utilised to add a much needed moment of WTF? to the otherwise unchallenged witterings of a woman who is, to all intents and purposes, precisely the sort of enemy of equality and progress that a more on-the-nose, political playwright might take pains to have put against the wall and executed by the final act.

But here, in this lightest of Brechtian moments, I reckon McDougall rescues the production.

Yes, Doherty and Abrefa go on to absolutely smash their “duet” scene [in a good way], and Tom Mothersdale offers a hugely appealing reading of the play’s “hero”.

But, confession time, I kinda hate Tennessee Williams. Granted, I’ve not seen much, because until very recently the plays looked as godawful in production as they sounded in synopsis. But now he’s being reclaimed by the Germans and decent British directors, so obviously we now have to go and see them. And, blimey, I’m really not sure about them at all.

Ok, there are caveats to this, but...

It feels like McDougall’s version, designed by Fly Davies, does about as much as it’s possible to do with the play without actually altering the text. And, ultimately it’s quite a lovely production. But, Christ, what’s it *for*? (the play). The Glass Menagerie has a pretty whacking central problem as a play, in that the central character of the first half – Amanda – is just insanely annoying. Vicious, self-centred, self-pitying, cruel, suffocating... The more convincing Scacchi is, the more it’s just absolutely no fun at all being in a theatre with her. If anyone can explain what feeling Mr Williams was trying to achieve for his audience here, I’d be very interested. I get the impression that the play is *a bit autobiographical*. So, ok, Tennessee, you didn’t like your mom. Not entirely sure you needed to inflict her on the rest of us. (Amanda, fwiw, is given pretty much no room to either grow or change as a character. She’s been written off by this dramatist as fundamentally vile, it seems, and Scacchi/McDougall certainly don’t seem to seek to redeem her.) I imagine there’s a production which could David Lynchify her, but it’s not this one. Here the study seems to be of unbearable claustrophobia and the casual exercise of callous power. Davies’s set is a too-small black box suspended over a pool. You feel the claustrophobia all the more for its pinched smallness. But, blimey, it isn’t half a tough watch as a result.

This feels almost like textual fidelity as violence to the text. In fact, it’s bloody impressive in its way.

I guess, in a slightly wussy way (and I’m about to do that annoying thing that Michael does of saying what I’d have rather something had done), I ‘d have rather that the stage has given at least the performers a massive pile of room and we’d had to have imagined the claustrophobia from a critical distance, and all that other Marxist stuff. No. I know that’s not what Williams is about, but from that moment that McDougall liberates in Act Two we see the problems of playing his scripts at face value. Taken apart, dissected, and examined as containers of a rubbish ideology made out of questionable psychology, I think we might learn something about ourselves (and our theatre culture) from watching them as such. But the days of seeing them as charming period pieces are clearly numbered now.
Posted by Andrew Haydon at 21:39