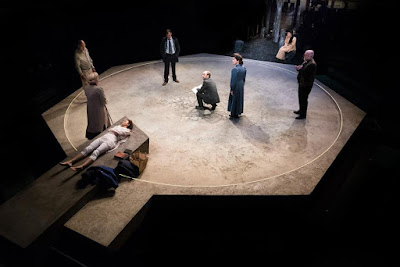 The Crucible is a remarkable play. There’s a fair chance it’s the best American play of the 20th Century, which is pretty close to saying it’s the Best American Play Ever, right?

That it’s from Arthur Miller’s same fertile mid-fifties period in his work as A View From The Bridge is probably not coincidental. It is fascinating that the apparent nominal crux of both these plays is a bloke whose dick has got him into trouble shouting that he wants his name back. In the hands of a lesser playwright, this might grate somewhat. Miller, though, precision-tunes the world around a situation so that we somehow empathise with and care about the stresses and strains of a good five or six central characters, their various needs and desires often completely contrary, mutually exclusive, but always horribly understandable.

It’s this sympathy that feels crucial to the Crucible’s success; at least, when performed straight and uncut – as I’d argue Caroline Steinbeis’s production is. And it’s a very, very good production indeed. Max Jones’s design creates a – well, it’s kind of like a real crucible, isn’t it? (see pic) – on stage. A shallow concrete drain, with, again, passing similarity to Benedict Andrews’s Cleansed. We get a real sense of why the play is named as it is.

While the set design essentially offers some slightly loaded/symbolic open spaces on which to perform – perhaps the most intriguing bits of the set are the giant neon cross outside the Exchange’s “module” audiorium on one side and the blasted stumps of the woods out of the opposite exit (I rasther love the idea of having bits of the set performing a sculptural function *outside* the actual stage. How brilliant) – it feels like the main interpretative functions are being performed by the costumes. It is essentially half modern-dress (the men), and half Doctor Who crossed with The Handmaid’s Tale (the women). The blokes are all dressed pretty much as the equivalent of their character might be expected to in modern Britain or America. Farmers wear lumberjack shirts, slightly more hoity-toity/well-to-do citizens wear Barbour jackets, the minister brought in to check for witches wears pretty standard Rev jumper and dog-collar. It works extremely well indeed. The slightly-brighter-than-pastel colours of he women, who all wear one-colour, kind-of science-fiction Victorian dresses – which in themselves are a clever way of suggestion religious and moral conservatism. I’m not sure I *liked* them, as such, but what’s that but a trick of taste? There’s certainly nothing *wrong* with them, and they’re no more or less distracting than rigorously observed historical costumes. Probably better, since they stop the audience just consigning all the evils of the play to its dual pasts of McCarthyism and wacko seventeenth century ideas about religion.

The reason I think it’s such a good play is probably because it takes such a dim view of both individuals and society. We see single persons all seeking to invent or utilise existing structures to their own advantages, and then we see the structure’s incapability of resolving its own contradictions; its inflexibility in the face of momentum. And individuals’ connivance at maintaining the structure, even against their better judgement. It’s a truly horrifying picture of an all too recognisable truth. Hardly anyone *really* “means any harm”. Murder can be signed off as face-saving. No one *really* has to feel responsible. And no one really believes in anything. “Belief” is a handy, cynical fig-leaf for far more selfish desires. “Justice”, let alone “fairness”, is a joke.

What is also interesting, though not foregrounded here, is the way that in a society where women nominally have no power – on one hand second class citizens, but on the other hand, fetishized symbols – one girl with sufficient charisma can basically bring about a small-scale holocaust. I wonder if we should look harder at what Miller ends up implying with this, or perhaps Abigail Williams’s gender isn’t important for the political dimension of the story.

Sorry, I’ve gone a bit off track, worrying about a confirmed classic play when what I should be doing is writing about how bloody good gthe performances are here. I’ve been a big fan of Jonjo O’Neill since (I think) I first saw him, in Rupert Goold’s King Lear, but I think this is the best thing I’ve seen him do yet. It’s kind of a boring thing to note, but the extent to which his Irish accent maps onto Every. Single. Line makes it sound like Miller had written it in dialect for precisely this performance. Which is about as high as compliments go for acting, I hope. The rest of the cast are also great, and also *really well put together* as an ensemble. *Of course* it is effortlessly multi-racial, the Royal Exchange is better at diversity than nearly every single theatre in London (on a par with the Young Vic and the Unicorn), but it is also really good at giving a convincing accont of the span of ages. There are more older actors in this than I remember seeing on stage in a very long time.

*Obviously* it’s taken me *ages* to get around to finishing this piece. Mostly it’s been a matter of other work having to take priority, but there’s also a sense that this had already done well critically, was selling well, and it didn’t feel very *urgent*. I mean, it’s a great play done great. What’s the rush?

Then, the other day, I happened to bump into a friend at HOME, and got chatting to their friend about this production, which he’d also seen. He’s a writer in his mid-twenties, and hadn’t seen the rain effect used at the end of the Crucible before. And he had *really loved it*. Not just because it’s pretty, you cynics. Like, really loving it on every level, primarily the symbolic. Evangelically so, more or less. And it made me feel quite ashamed of my seen-it-all-before approach to it. So bloody what if *I’ve* seen it before? He hadn’t. And, as a result, he’d seen it all the more clearly than me. It’s instructive to have someone nearly half your age just simply explain why the rain had come in at precisely the moment that it had, why it hadn’t made them think of A View From The Bridge (because they hadn’t seen it, because London or New York, not Manchester). And why, actually, that approach to watching theatre had yielded him a far richer experience of seeing the play than all my memories of precedents had. I mean, I’d *liked* it, but hearing it talked about and described by someone unencumbered by having seen A View From The Bridge (or Ostermeier’s Hamlet, or half-a-dozen other really great other uses of stage rain) really brought it alive for me.

Bloody “expertise”. What’s it good for, I ask you? 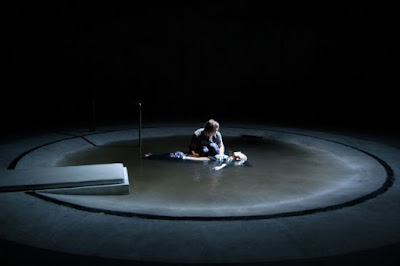 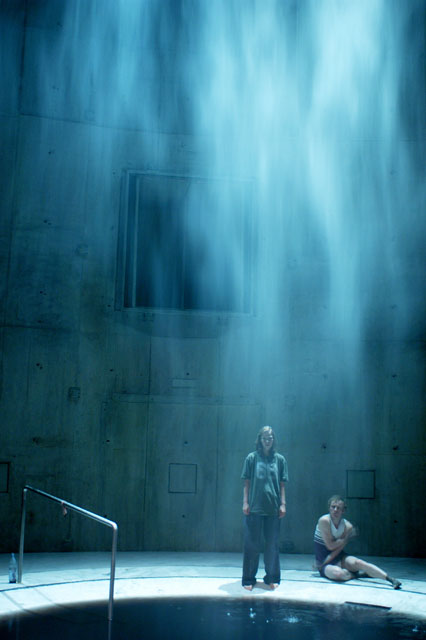