And Now: The World! – The Edge, Chorlton 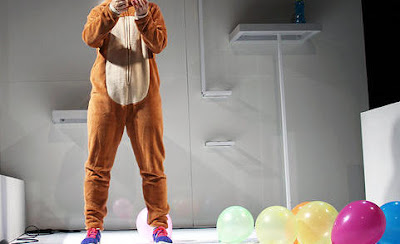 There we go, there’s the boring bit of theatre criticism despatched.

Right. This is really interesting. And Now: The World! is a text for theatre by Sibylle Berg. It’s the second time I’ve seen it. The first was in 2013 at the Gorki Theatre in Berlin, directed by Sebastian Nübling.

I say it’s the second time I’ve seen it, but this version is so different both in tone and style that it might almost have been a completely different play. While the story was essentially the same – at least one young woman tells us about herself; her life before now; her life now – the way it is told more or less entirely changed its meaning. The first time: four women; tough, nonchalant, aggressive, moody, streetwise; this time: one woman; English, apologetic, hyperactive, neurotic. Is it the same story if the perspective is so different?

The text is a tough, rough thing. It’s ironic. Deeply so. But I get a sense that the way the irony functioned in the two productions actually tells us a lot more about our respective cultures than the actual words. Or the cultures of England and the German language (not *Germany* because the Gorki production was in collaboration with the Junges Theater, Basel, although I think the performers were from the Gorki company? I dunno). Anyway, there are lots of different varieties of English. It felt like this register – nice, unthreatening, middle class, but not posh-middle-class – might have positioned the story in a place that made it seem different to how it could have seemed. Some people tell me Germany’s class thing is different to ours. Others say not so much. Whatever. They’re *a lot less* obsessed with it than we are. But it’s not just about class, there’s also a thing about attitude here. Where, Nübling’s production is multi-ethnic (and for all I know, multi-regional), Graham’s production is white and southern/midlandsy accent-wise (I thought, although I wouldn’t swear to it). None of these things are criticisms. There’s nothing wrong with any of those things. But they do read differently, and it’s that surprise that I’m negotiating here. That social position can so alter how one understands a text.

Then there’s the productions. In this, Abigail Graham’s production, the performer, Jennifer Jackson, is placed on a nicely designed shiny white floor and back wall. It’s – aptly – a bit like she’s standing in an open MacBook. But it’s got all these suggestions of furniture too; a table, a shelf, a chest, maybe a slim wardrobe. These mean she can leap about the set, almost like a monkey in a zoo, swinging off bars on the wall and hopping from platform to platform. This is also apt. In this version of the monologue, she’s on the phone, on skype, texting, her mum’s calling on the landline... there’s time-urgency, compulsion, near-hysteria. Compare Jackson with the four young women in Sebastian Nübling’s version who pace the empty stage listlessly, and whose phone calls and skype chats seem to be spread across months rather than one anxious real-time-compressed day. The gulf of difference is genuinely unsettling. (And, it’s worth repeating, neither version feels either “better” or “wrong”. Just radically, radically different.)

Perhaps because of what I’ve been working on/thinking about recently, something occurred to me watching this: in Germany, there’s not quite the same vast tradition of stand-up, or live comedy as there is in the UK.

And the effect on how you think about this show is startling when you do consider it. Because, as a text, it’s quite unlike anything anyone’s written here, *as theatre*. Yes, Graham’s production makes it into something that we’re more familiar with in Britain – it’s properly fascinating that the brilliant writer Clara Brennan (Spine) is the dramaturg on it – really the text itself is rangy, diffuse, hardly telling “a story” at all (in the way that, say, Spine does). Instead, if you dressed it up the same, I think it would make all sorts of sense as stand up (although there aren’t many jokes, but I wonder if it would have more laughs just if presented in that way): just the performer, a mic, a raised stage. And, thinking back, in a lot of ways, that’s almost what Nübling’s production did do. But, obviously, because it doesn’t read like that in Germany, and of course because there were four people on stage. But, still, it was interesting to think about. The way we signal modes of performance... I think this also has something to say about signals of “liveness”. It’s a kind of crucial key to seeing how *rehearsed* our performers often seem. Even when signalling “liveness”, as Jackson sometimes does.

I’ve not said much about the subject matter yet. And I’ll admit, I was slightly thrown by it here. The central character here felt almost like she was interestingly played *against* some of the naturalistic conclusions of the words, whereas her characters’ self-irony seemed to function differently again. I’ve speculated fruitlessly on some sort of national difference in uses of irony between Britian and Germany before (yes, yes, I know Sibylle Berg lives in Zurich now and was granted Swiss citizenship in 2012, but...), but I think this piece gets close to demonstrating where we locate our irony, in contrast to where else it can be located. For example, the number of times the character seems to complain about the compulsion toward political correctness. I mean, in Britain complaining about “PC” is the province of UKIP. See Stewart Lee, etc. etc. Like, are we meant to take this seriously? IS the character proposing a notion we’re invited to agree with, or is it a facet of her character that we might view with irony? It’s hard to tell, but perhaps such anxieties themselves are also located in England’s own peculiar relationship to saying anything straightforwardly.

In a best case analysis of the text, it might be like a cross between Josie Long and a Bikini Kill record, at worst it might almost be blogpost by a nascent teenage Jan Moir or Katie Hopkins. Of course, that Berg is a 50-something woman writing a twentysomething character complicates this further. What are we to make of her take on this person? Is the author ironic *through* or *about* this person? (Or both?) Or is that not even a thing?

[Yesterday,] I also read this (brilliant) interview with Dennis Cooper, which reminded me to question my (recently lazy) attitude to *content* and characters, and what an author might mean by them. But also, raises that question again of the extent to which any author (be it writer, director, dramaturg, or performer) has a final say-so over *meaning*, compared with the individual audience member.

[and obviously my relationship with this position is extra complicated by the fact that I then have to recount my experience of being an audience member to another audience: you readers – who then have the final say over what I’ve said/meant.]

So, yeah. Stuff to think about. 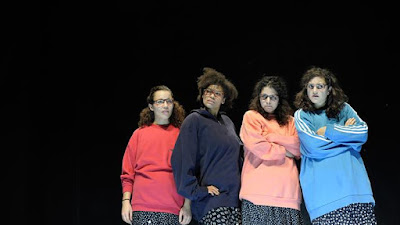 I have a show that I would like for you to review. Do you have any contact information where I could send the press release to?