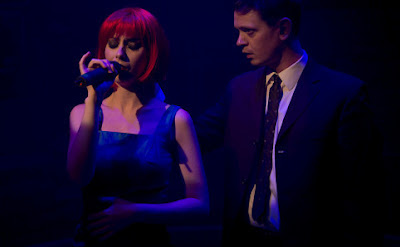 Penelope Skinner's new play is an interesting creature for a number of reasons.

If I say “it doesn't feel like a proper play”, can we all agree that I'm not being critical, or even endorsing the sentiment?

And, let me say, I'm as surprised as anyone that I'm saying this. I don't even like the idea of a “proper play” for heaven's sake. And yet here I am, about to try to explain why I've just said it.

What The Sound of Heavy Rain is, primarily, is fun. And let's be honest, straight-up “fun” is a pretty rare commodity in the theatre. That's not to say ...Rain is just unremittingly trivial; and it serves up a real curveball six pages before the end. But, for the most part, Skinners new play is essentially a knowing, knockabout genre pastiche. The genre in question being the film noir/hardboiled private detective thriller. Obviously, we've seen private detective pastiches before, though not many in theatre, and far fewer from New Writing companies – in so many ways, this feels like the subject territory of the New Work contingent, which in itself feels like an interesting claim.

I suppose the real reason that it doesn't feel like “New Writing” – at least according to the deadly Sierz-defined ghetto – is that it isn't about a contemporary issue, and plainly isn't drawn from personal experience (well, I don't want to spoiler the ending, but actually the last bit contains some stuff that seems all too painfully real). It's, shock-horror, just a story! And a fun one! What were Paines Plough thinking?

Because it's A Story, with Twists, and Stuff, it's oddly much harder to write about than plays that purport to be An Important Tract on A Serious Social Issue. I've been robbed of my chance to hold forth on the contemporary significance of the private detective in Britain's negotiation of its post-colonial selves, or something.

James Grieve's production is similarly – frustratingly – fun. Much more use is made of the Roundabout's actual architecture here. Rather than simply a starkly lit bare stage, we find the thing's possibilities opened up and demonstrated as the playground it can potentially become. The thing has three stage entrances and exits and three adjacent entrances to the stairs at the top of the steep, short seating rake. All six access points are perpetually in use here, giving the fixed-seated audience member the impression of being sat in the middle of a busy traffic intersection on a merry-go-round. (Actually, if more productions turn out to be directed like this, perhaps “Roundabout” isn't such a bad name for the thing after all.)

Emma Chapman and Richard Howell's lighting design soaks the whole space, through a haze of smoke, in the shadows of Venetian blinds and the bright lights of multi-coloured discos.

In ...Rain we see all four actors from the Roundabout season (though, not having seen Payne's piece yet, I can't comment as fully as I'd like on the contrasts demonstrated. However, just the different in what O'Flynn and Cope are called upon for here give a reasonable idea that Andrew Sheridan and Maia Alexander will be up to something quite else in One Day When We Were Young).

Again, it's hard to say specifically the things that mark these performances out without giving away whole chunks of the missing person detective story that forms the nominal core of Skinner's work. Suffice it to say, that there's an unexpected amount of range on show here (which all adds to the FUN, dammit).

[needs more. But want to at least get these up as initial place markers. And my brain's tired now. I should get back onto “Fun” and the New Writing ecosystem...]
Posted by Andrew Haydon at 15:21