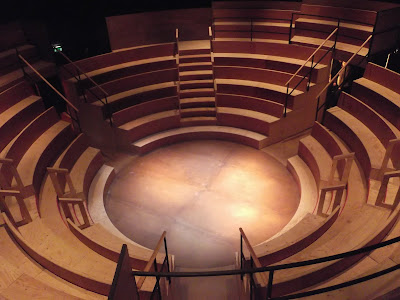 This should be a tripartite review; Paines Plough's new London season/offering comprises three plays by up-and-coming writers Duncan Macmillan, Penelope Skinner and Nick Payne. However, thanks to the peculiarities of my schedule, I've yet to see the Payne. That said, there is an extra element to this season that deserves almost a whole section to itself.

So, I'm going to post this intro, then a review of Macmillan's Lungs below, then the review of Skinner's The Sound of Heavy Rain under that, so they can be read one after the other. Hopefully I'll not muddy the waters too much by writing about one element in a review of the other, though I suppose the conclusion will turn up at the end of the ...Rain review. Grr. Bugger. Anyway...

Intro bit (or cut straight to the chase)

The Press Day for the new Paines Plough season felt genuinely exciting. Three new plays, all by quite-established, definitely-exciting writers, and in a totally new space/venue. Ok, so Shoreditch Town Hall isn't completely unheard-of as a venue. Matt Trueman pointed out he'd last been there to see 66 Minutes in Damascus, but Shoreditch Town Hall isn't the story here.

The Big New Idea with Paines Plough's (PP) Roundabout season is the London introduction of the touring company's new building. A touring company with a building, you say? How does that work, you big numpty? Good question. What PP have done is commission someone (try as I might, I can't find a definitive credit on the programme) to design and build them a small-ish wooden in-the-round amphitheatre, the theory being that it can be taken down, driven around, and put up anywhere so that the physical aspects of any given production will be ostensibly within the company's control, rather than subject to the vagaries of the design of specific auditoria and what towns do or don't even have a purpose-built space for receiving plays.

Frankly, it's a brilliant bit of thinking. Rather than subjecting themselves to endless transfer difficulties, other people's scheduling difficulties, and just the woeful lack of towns without any sort of theatre at all, PP can now just book themselves into any hall their “Roundabout” (ok, the name's not beautiful...) will fit (which is probably most) and put on essentially the same show as they're putting on here in London or there in Sheffield.

And, it's a really nice, nifty bit of design. Granted, I suspect I won't be the first or last London critic to note the similarity in design to Miriam Buether's makeshift wooden ring for Mike Bartlett's Cock – a fact that might have been emphasised by the subject, writing and playing style adopted for Duncan Macmillan's Lungs, which I happened to see first in the space – but, I guess that's largely down to the shape and chosen construction material. I don't think Mike's Cock should have the monopoly on wooden Os.

As it happens, it's Penelope Skinner's The Sound of Heavy Rain that shows off a lot more of the potentials for the space, since it doesn't carry the stipulation: “Light and sound should not be used to indicate a change in time or place” that Lungs does. But more of this later. And so, to the plays...
Posted by Andrew Haydon at 15:32

Pretty sure it's Lucy Osborne did the auditorium