Director David Marton is The Big New Thing in mainland Europe. I caught his production of Die Heimkehr des Odysseus in Berlin last year (one of the enormous file of “unsent Postcards”) and thought it was pretty cool (it’s still in the repertoire if you’re around: light, bright and well worth a look). About this time last year he’d opened shows in Hamburg, Munich and Berlin. This Das wohltemperierte Klavier comes from Paris and opened in January this year.

Marton’s big new thing is basically opera-for-theatre. What he does is propose (or get given) an opera to do (Die Heimkehr des Odysseus was originally Il Ritorno d'Ulisse in Patria by Montiverdi) and uses members of the theatre’s ensemble to perform it, with maybe the addition of a couple of professional musicians and maybe one or two actual opera singers for the most difficult or important parts.

His productions are also very deconstructed. Heimkehr... was accompanied, I think, by an electronic keyboard, a bass guitar, an electric guitar and maybe a couple of orchestral instruments. And the score had been, well, Nüblinged at the very least. Totally Castorfed might be more accurate. There were shreds and fragments left, and it still made total sense, but it had also been hacked around a good deal. Reverence isn’t Marton’s strong suite. Production-wise Heimkehr... looked not unlike the Marat/Sade I’ve just reviewed, albeit with much better stage-pictures and a far surer hand on the dramaturgy.

This is a bit of a departure, though. Not least, for the simple reason that Bach’s WTK isn’t an opera (it isn’t even an oratorio), and therefore doesn’t have a storyline. So, I was completely fascinated to see how he would stage 48 solo pieces for, well, for a Clavier – which tends to be a piano these days.

To help solve this non-narrative problem, Marton has added Hungarian novelist László Krasznahorkai’s 1989 novel Az Ellenállás Melankóliája (The Melancholy of Resistance) to the mix. Naturally, I haven’t actually read the novel (have you? No? Well shut up then); so, I decided to go in totally blind (à la le criticisme Anglais). Reading through the vague synopsis of the book on Wikipedia afterwards, however, it seemed that I’d pretty much kept up with the general spirit of the thing despite my German. Indeed, I was delighted at one point to instantly recognise Slavoj Žižek’s routine about tulips which had been translated into German and copied and pasted wholesale into a dinner party conversation.

Das wohltemperierte Klavier (as I shall/should continue to refer to this work – or at least as WTK) opens onto a remarkable wide-screen set (click on the “cover” photo, above, for full screen version); three rooms wide and at least two rooms deep, with walls simply demarcated by metal frames. In the background is a beautiful polished grand piano, and in the foreground, another grand piano without its legs is sat on the floor.

It’s intriguing; we’ve got the piano(s), but we’ve also got several bedrooms, sofas, bookcases, and piles of other bits of furniture packed up. A matronly woman enters and sets about straightening a runner. She is softly, operatically warbling tunelessly to herself. “Immer Allein”, she carelessly sings.

And from this off, it all feels like a slightly offbeat version of the Cherry Orchard. (And so it proves to be). The characters – there are eleven – gradually enter, and waft about the rooms. They seem to be house guests in a house that is being packed up and moved out of. They seem trapped in their lives, in their relationships – there appears to be a strangely loveless relationship between some manner of army general in a wheelchair and his wife. She may be starting or carrying on an affair with the son of the house. The mother of the house (not the matronly figure, I don’t think), seems worried about the dinner, about her guests. It feels like classic Chekhov country.

Of course, all these “seems”es are partially down to my still-patchy German. I’m sure the production is a lot less vague about the relationships than your reviewer (and possibly his companions – Mark and Jana – were). Although Jana, whose German is infinitely better than mine, did explain the substance of a long close-to-final speech made by the son about his joining a mob involved in some sort of revolutionary mob violence, with long descriptions of brutality, I think). So, there was also more going on outside this comfortable middle-class home than merely the drifting sense of impending change that one gathers from Chekhov; here were walls insulating the inhabitants from something very real, violent and current. Though, from the production, it feels like this insulation is incredibly effective. One doesn’t feel from the way they are acting, from the way that they behave and interact, that they are in fear of their lives, even their way of life. Neurotic, yes; endangered, no.

I notice that as soon as I start discussing the action on the stage, I immediately start to relate the “plot”. Which means that a huge chunk of what actually happens on stage is suddenly cast by the wayside. That is: the Bach. And, actually, it feels remarkably integrated. How, and to what end, I’m not fully sure – which could equally be down to either my language skills, or something altogether more mysterious or opaque about how the piece operates.

Put simply, sometimes – the first instance is shortly after the start – someone comes on and just plays a bit of one of the pieces from Das wohltemperierte Klavier; other times, bits of them get sung (with no piano accompaniment; other times, with); an on one occasion, more or less the whole cast chip in to a rendition of one of the pieces (I’m sorry, if you wanted to know exactly which pieces they play, you should have sent a musicologist or Bach expert) on a surprising array of electronic keyboards and other noise-making apparatus. The effects vary as widely as the methods of relaying the music. The first performance, on the full grand piano, is as posh and shiny as the piano itself, and you almost sink cosily into the virtuousity (and also – I’ve never been to a piano recital myself – marvel at just how good a piano can sound). Other pieces, where the cast sing music as a round, or where they perform the various chords and frills across the wide, open vista of the many-roomed set, are exciting by virtue of their sheer playfulness (almost silliness at times) as much as the prettiness of the music.

There is a sense that this music – I won’t call them musical interludes – are as much a part of the dramatic landscape and psychological geography of the characters as the passages of speech, or indeed the near-silences where characters are just inhabiting rooms, singly or in company. What is interesting is that being pre-existing pieces of music – many of them quite well known – the extent to which we as an audience really hear the way in which the piece might be intended to supplement our understanding of the characters’ perhaps falls slightly by the wayside. At the same time, despite the lightness of the piece, it does feel like rather a lot of high-quality thinking has gone into the selection and arrangement of the music.

It is interesting to note, cf. Marat/Sade, that WTK forms a part of the Schaubühne’s building-dramaturged season concerned with revolution (see also: Ostermeier’s The Enemy of the People – brilliant review of it in Melbourne by Alison Croggon, who in turn links to Jana’s essential review seeing it in Berlin – which I *haven’t* seen), albeit as a “guest production” from Paris. It also makes for interesting comparison with Glaube, Liebe, Hoffnung at the Volksbühne, which I happened to see the previous night, but which is, theoretically at least, otherwise unrelated.

On the strength of this and Marat/Sade, I think I probably find myself somewhere between the two camps. On one hand, while not thinking much of Marat/Sade, I liked WTK enormously. On the other hand, I think I see here again some of the same corrosive “non-politics as political comment” that Jana sees in Enemy... As such, this is great bourgeois intellectual entertainment theatre. It is beautifully made, talented, tasteful (and not tasteful in the sense of prissy and inoffesnive, but actually displaying really good taste – Bach, Alissa Kolbusch’s spartan set, Erich Schneider’s guilelessly over-bright, too-white lights; the “difficult” (but not-too-difficult) aesthetic), obviously intelligent and incredibly original.

At the same time WTK is again drilling through to the idea that revolution is undesirable and impossible. Which, in the immediate analysis seems demonstrably true (at least for Western Europe). Plus the fact that there isn’t a revolution in the world that hasn’t led straight to a bloody dictatorship within five years. But here these productions Krasznahorkai’s Hungarian novel of ‘89, Weiss’s meta-theatrics of ‘64, and Ibsen’s questioning pessimism of 1882 seem to become fait accompli arguments for the impossibility of meaningful change of any sort. Pitched somewhere between the wry smile and the resigned shrug, what is the Schaubühne really trying to say?

Part of me hopes if more than half the argument isn’t just some sort of theatre-cool cynicism but is in fact a desperate attempt to prick consciences with *their* inaction. But perhaps they really are just sick of the idea of the change, and find heart-on-sleeve optimism and a desire to at least try to challenge the status quo a bit, well, old-fashioned. In this, perhaps it is Marthaler’s slow, unshowy, intelligent staging of Glaube, Liebe, Hoffnung after all that shows us the face of the present, as well as of the chilling past – a society not quite managing to care enough to make a difference.

It raises all sorts of interesting questions; most pressingly, those related to Chris Goode’s question about what we make in a room when we make theatre. The above-named productions seem to divide into making a depiction of a revolution as a statement of its failure, and a depiction of complete inaction as a quiet indictment of such behaviour. If “the point is to change it”, then it seems Germany, and beyond, need to see something new.

As well as seeming to tap into Chris Goode’s concerns in UK, this question also seems to lead on from what Wojtek Ziemilski told me about the state of Polish State theatre, and then on further into the further problems of state-funded theatre discussed at EEPAP.

But I think those questions will have to wait for another day.

(Briefly, leaving aside the question of changing the world, however; Das WTK really is a lot of intelligent, well-designed, musical fun – and definitely three million times better than most of what passes for musical theatre in the UK. Irrespective of this particular show’s politics, as a new (at least to me) form, or format, I think this kind of intelligent, playful, deconstructed, musical theatre needs to been seen in the UK and soon...) 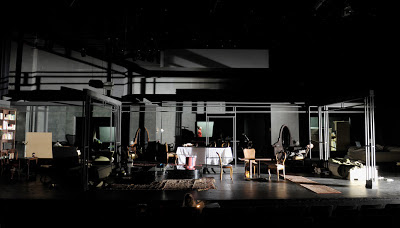 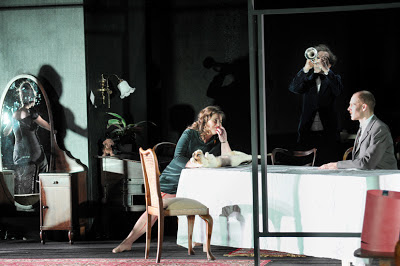