[in which I totally reproduce the usual model for talking mostly about The Play as a given and relegate the production to second place. Am interested that I did this. Continued from above...] 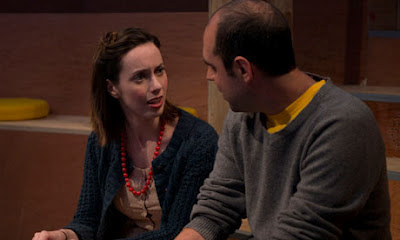 As I note above, it will take a strong-willed (or very new) critic not to mention that there are many superficial similarities between Duncan Macmillan's Lungs and Mike Bartlett's Cock. We might recall that many aeons ago, Duncan and Mike (both of whom I know a bit) were two of the six “Apathists” whose monthly (?) outings at Theatre 503 produced more interesting, exciting, experimental writing in a year than Caryl Churchill has in the last decade. If we want to look back further, we could also note that both writers studied under Simon Stephens in the Advanced bit of the Royal Court Young Writers Group.

However, for all that, Lungs is entirely its own thing, and a rather amazing thing at that.

I should confess, I went in with a slightly wrong idea of what the play was about. An idea that is sort-of fostered by the blurb – “In a time of global anxiety, terrorism, erratic weather and political unrest, a young couple want a child and are running out of time...” – but also by the fact I was seeing the play as part of a three-play marathon press day.

Ok, the blurb isn't misleading but it is partial. I'd say it almost perfectly describes the first half of the play. Which was the play I was expecting...  But it almost totally ignores the second bit. Added to which, thanks largely to Edinburgh, my body clock's default setting for New Writing is, roughly speaking, about an hour. Especially if there's more than one of them in a day.

The net result, then, was me being doubly taken by surprise by the second half of Lungs. That said, in an interesting way, I'm not sure if the way the first half unfolds exactly sets up the second half.

(I am talking very specifically about my experience here. Don't think these are criticisms or reasons not to see the play. If anything, I vaguely think having more of this information prior to watching the play would have helped me relax into just watching it/letting it happen when I'd seen it. So, to reiterate: I THINK THIS PLAY IS VERY GOOD. I'm just looking at some aspects I found interesting here.)

The first half, as I said, does exactly what the blurb says on the tin. And it is kind of magnificent. Macmillan absolutely nails the pre-baby anxieties of my generation and his. It is interesting to consider Lungs in the light of Katie Mitchell's Ten Billion (which I don't think has had nearly enough praise for the game-raiser it is as regards theatre's dialogue with the impending global catastrophe that is climate change). There's also a telling comparison to be made between Lungs and Churchill's Love and Information. In a funny way, the latter is almost the same play, just presented by very different (and in my view, less effective) means. The comparison is, after all, between ways that we figure the sheer amount of information now available to us, the anxieties it provokes, and the effect this has on the way we live. Where Churchill dramatises this with an almost flick-book look at the information spread across what theatrically could be taken for almost infinite space, Macmillan compresses it into the effects it all has on one couple. The picture it creates is as true, recognisable, and frightening as anything you're likely to see about yourself in the theatre this year. I mean, dear God, Macmillan has got the measure of what people say. And, also, how people say it.

The writing here is also remarkably, ridiculously good. I don't always go for stage dialogue that seeks to slavishly reproduce the way that people actually speak, but that doesn't feel like the game. Yes, it's acutely observed and hugely say-able – actors Kate O'Flynn and Alistair Cope rarely sound like they're doing anything but improvising the lines (I say this as the highest compliment) – and yet there's artistry to it too. As with Churchill and Bartlett, there's an unshowy writerliness to the crunch and fizzle of the words on words here. There are also a lot of excellent jokes.

This first half pins so many contemporary anxieties so exactly that you almost get giddy with it. By contrast, the second half feels like having laid out the terrain in which these characters live and think Macmillan is now moving them around in it. Quite a lot. In terms of time-scale, where the first half is tight, I think close together, and claustrophobic, the second covers a lot more ground, with more events, and more inventions. It's not a problem, but it is a definite shift, and one I felt oddly unprepared for. That said, as in the first half Macmillan's observations are acute to the point of invasive. How, we might idly wonder, did he get a transcription of this row, or that regrettable evening. And the subjects and events (I won't spoiler them) are common, upsettingly human occurrences. If we haven't been there in this specific instances, the chances are we will at some point.

Something unusual about Lungs is that it seems refreshingly judgement free, as theatre. Yes, it manages to pile up, dissect, and anatomise a whole range of contemporary experiences, but you don' much get the impression that Lungs is trying to teach us how to live, or sell us a particular solution. If anything, apart from certain behaviours which we all know aren't on, it sends us back into the word with even more questions and fewer answers. But perhaps a better sense of the terms on which we ask those questions, having been able to sit outside of “those conversations” and watch them happen rather than being involved and therefore having to improvise our own responses.

Richard Wilson's directorial hand feels almost invisible here, which can only be a massive compliment since there's plainly a lot of directing that must have gone on. The production feels incredibly organic, though. From actors to space to direction to text, everything seems to fit so snugly that apart from spoken content – which, given that Lungs is technically an extent text, having premièred in Washington DC last year, I suppose we can attribute directly to the playwright – it feels like there are no discernible cracks where you think “Oh, the director did this”/“Oh, this is a design decision”/“Oh, that must have come from the actor”.


In an odd way. Having not seen the Nick Payne show, I almost feel like I'd have rather seen Lungs completely in isolation, however, seeing it in tandem with The Sound of Heavy Rain did throw up some interesting additional thoughts...