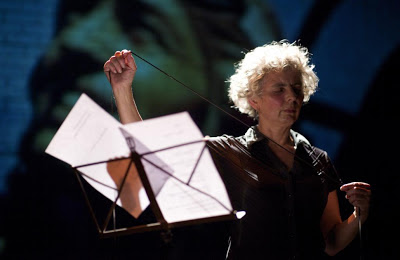 Wendy Houstoun’s 50 Acts is a piece about getting old, being on stage, and the Tories fucking everything up. It appears as part of Dance Umbrella’s season at what turns out to be London’s best new theatre for decades the Platform Theatre King’s Cross (I’d been to the studio before but the main house is somewhere to get properly excited about). I mean, I would say this is now one of the five best stages in London.

(And... Not only is the venue so far benefiting from rather brilliant programming, it also looks and seems to behave like a progressive, European venue and not the ghastly relics of Empire that constitute London's hideous West End.)

(And... As if being the best new theatre space in London isn't enough, there was an exhibition curated by Tim Etchells on the way in. And... a rather neat installation down another corridor called Black Lab...)


50 Acts is the sort of piece that can upset dance purists because it’s got more speaking than movement in it. And what movement there is, as Houstoun herself points out, is being performed by someone around 50 years of age, with no formal training whatsoever. (I’m not making these dance purists up, btw, I’ve heard them grumbling at Sadler’s Wells about Ivana Müller)

However, since we’ve all kind of got over the whole skill thing in dance now (sure, it’s nice to see sometimes, but it’s no excuse for intellectual prostitution – ours or theirs), what we’ve really come to admire here is – well – Great Dramaturgy in Action, as it turns out.

It might be both useful and reductive to note that 50... bears a similarly tangential relationship to “dance” as Forced Ents (with whom Houstoun has collaborated) do to theatre. That is to say, of course it *is* dance. Or at least it is perfectly within its avant-garde rights to categorise itself as such. But it would perhaps surprise the hell out of the unwary traditionalist, who might be expecting something more like this, or even this.

Having been introduced to dance via things like Ivana Müller's While We Were Holding It Together and Dave St Pierre’s Un Peu Tendresse – Bordel la Merde (and seemingly *nothing else*) at “theatre” festivals in mainland Europe, my tolerance of-, enjoyment of-, even affection for- “dance” that perhaps contains more speech than movement; dance that you could probably spend time arguing was as much “theatre” as it was “dance”; is perhaps unusually high for the dance world, but is also perhaps inevitable given my theatre background. In short, this work looks precisely like something that in a parallel world would be being programmed at theatres. (Actually it already has been, but here it is part of a “dance” festival.)

[Diana, feel free to cut all this taxonomical wrangling when you edit the piece for Exeunt. No one needs this shit :-) *]

So what it is? Well, first off, 50 Acts is pretty much an object lesson in just how interesting one person can be on a more-or-less empty stage (of course no stage is ever “empty”, but that’s a different discussion and there’s not much actual stuff on this one) for about an hour.

“This is the First scene” Announces Houstoun from the the front of the stage, unfussily lit from above in a narrow band of light almost sectioning her off in this position at the front of the stage. But then she goes to the back of the stage and the projections take over the responsibility of relaying “her thoughts” into our head.

It’s a curious sensation, but I’ve only really just thought about the fact that she almost certainly wasn’t thinking those thoughts as I was watching her yesterday [it was yesterday when I wrote that sentence] (“almost” since she might run the script in her head, or read in reverse the words in the light as it shines past her from projector to screen). But so complete is our understanding of this mode – the mode of the voiceover or the surtitle narrating the inner life of an actor before us that one is swept along to the end before one necessarily thinks to question it.

Through the following acts – beyond the usual theatre-meaning of acts, there’s also the sense of “Acts” both in the same sense as Shakespeare’s Jacques expands it, and as the kind of line-up of extraordinary “turns” that old variety posters often promised – the mode of receiving thoughts switches often between our reading the written and hearing the spoken, both by Houstoun in person and as a recording. There’s also the interplay of recorded music and stock film footage. At a few points, when she’s running about, old black and white footage of crowds also running about is shown.

Houstoun also makes use of what we might call the “list method”, also beloved of Forced Entertainment and Tim Etchells, Andy Field or Ivana Müller. That is to say, there are sections when she runs through exhaustive permutations of sentences with a certain starting point or theme. It’s a method I admit I find incredibly seductive and appealling when it’s done well, as it is here.

The cumulative effect of the piece is not conclusive, or emotionally manipulative, so much as contemplative and strangely joyful. And without watching again, from an analytical standpoint, rather than simply, notepadless, allowing yourself to get swept along with the feel of the thing, I honestly couldn’t tell you why.

*[postscript: I've just realised, reading back, that leaving notes to "Diana" in the middle of reviews makes me sound like Agent Cooper.  Which I like.  I was, however, referring to a real person.]
Posted by Andrew Haydon at 10:52