Through a Glass Darkly - Almeida 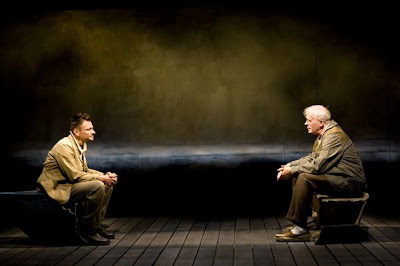 The big story here is that Through a Glass Darkly is the world premiere of the first adaptation for stage of Ingmar Bergman’s film of the same name. The only one of his films that he gave official permission to be so adapted.

It’s not a film I’ve seen, so there’s a bit of an elephant in the room here. This one of those perennial questions about reviewing. Once you know something’s going to be adapted for stage – be it novel or film – should you immediately seek out a copy and read or watch it, or should you watch it closer to the actual event, or save it until after you’ve seen the stage version? Because there’s always going to be an impact of one onto the other. I tend to think, if I’ve not seen/read the thing before I hear about the adaptation, I should probably leave off seeing the original until after I’ve seen the stage adaptation, so as not to wind up experiencing the stage version – which is after all the one I’m actually meant to be reviewing – as a pale shadow of the original.

The problem with this approach is that you wind up not knowing where to attribute praise and blame. Have difficulties of transposition been masterfully surmounted or has the film forced the play into an odd place? How much has it been adapted? Is the original better or worse? Should one even go about comparing a good film to a good play? Anyway, it’s too late now. I’ve seen the play and I haven’t seen the film, so this is essentially a review of what’s on stage at the Almeida. So much for critics being authoritative.

Though a Glass Darkly opens simply enough. A family emerge from a sauna/steam room/ swim in the sea, towelling themselves off and chatting happily. Thanks to the vagaries of casting conventions, it takes a couple of minutes to establish that the older man (David, Ian McElhinney) is father to the young woman (Karin, Ruth Wilson) and youngest man (Max, 22-year-old Dimitri Leonidas, who’s playing sixteen here), while the other man (Martin, Justin Salinger) is Karin’s husband.

Almost at once we’re made aware that something isn’t quite right. Father and husband talk of the wife’s recent dispatch from hospital. They exit. On another part of the coast, Karin and Max sit and chat. They’re awful flirtatious for a brother and sister, but that’s fine, right? Except that we now know she’s a bit unspecifiedly nuts, and so her every action seems that little bit more underscored with our concern.

And this is sort of how it continues. Little encounters between members of the family at David’s remote holiday cottage/writing retreat. A table rises up through the trapdoor of the Almeida stage and the family sit down for dinner. There’s mention of a deceased mother. Max has written a play, Karin has carefully rehearsed the prologue to perform to David. Martin sits up the other end of the profile and keeps a low profile. David, given more to self-absorption than parenting fails to take an interest in the play. Max is sad, Karin is cross, then it’s time for bed – for which the table lowers halfway back into the stage to double as a bed.

In the night Karin hears spooky voices amid the dripping and creaking of the old house. We hear them too. The thing circles and turns about in much the same way for the majority of the remainder of its 90 minute stage-time. It’s well done. Mostly pretty well acted – Ruth Wilson is best, and it’s a toss up between McElhinney and Leonidas for least good (although both have their moments).

What’s most striking is that, as narratives go, it’s very still. It feels like it maybe should be quite Ibsen-y, except that we know all the information. There isn’t really a shock revelation of something buried that’s underpinning all the tension.

There’s the dead mother. She had the same mental illness that Karin now has. And the father didn’t really deal with it very well at all. Indeed, he writes in his diary that he pretty much used his wife’s illness as an engine for his not-terribly-important writings. But Karin discovers this diary entry almost immediately and confronts her husband about it, who in turn confronts David.

Similarly, Karin recalls her mother’s “mad” episodes. They didn’t strike her as a child as madness, but as fun adventures. And there’s a sense that she isn’t quite sure whether or not she really trusts that her “madness”, or mental illness, as we might now prefer to think of it, is really “illness” at all.

Karin’s illness revolves around her hearing voices and trance-like states in which she imagines herself in a waiting room to heaven, waiting to look upon The Almighty. As a consequence, she isn’t at all sure that she wants to “get better”. Her husband and father aren’t especially convinced that she could anyway.

There’s sort of a question, at least in the text, of whether or not she is indeed mad, or whether this “madness” is a construct of the men around her. Strangely, the staging dispels this ambiguity by apparently playing us the voices in her head, and then, when Karin goes into one of her trances, by playing appropriately “heavenly” music and shining a Very Bright Light down onto her from above. Assuming we’re not meant to read these visible, audible signs as literally existing in the world of the play, but rather as manifestations of what Karin’s seeing, there doesn’t seem much ambiguity in the mind of director Michael Attenborough as to whether or not Karin is on the same page as the rest of us.

While the staging looks hugely competent and nicely designed (although I found the slightly off angles of Tom Scutt’s impressionistic sort-of interior/sort-of cliffs oddly annoying), it doesn’t feel like the whole thing was properly gelling on the night I saw it. Now, of course, this would be where it would be most useful to have seen the film. Perhaps viewed as a supplement to the film – as an adaptation of something previously known – it comes over as much more interesting, insightful commentary, but as a stand-alone experience it feels strangely inconclusive. There is drama here, and some moments of beautifully nuanced performance (not just from Wilson. I quite liked just how Scandinavian Salinger somehow managed to seem, while saying and doing very little), but the whole wound up feeling more like a celebration of well-done-ness than as a thing which fascinated in its own right, coupled to the fact that a fifty-or-so-years out-of-date understanding of mental illness is always going to grate slightly, especially when it’s married to the dubious trope of “holy lunacy” (like “idiot savant”, but even less savoury). But, yes, all very well done. Probably just me not going for the wider picture.
Posted by Andrew Haydon at 11:58

I'd say the main differences are threefold:

1) This version is palpably more Karin-centred;
2) The mother isn't even a significant absence in the film;
3) There are a lot more words in this version.

It's the last that strikes me as most odd, and I'm inclined to say culpable. We all know the canard about showing rather than telling, and theatre has a greater capacity for showing by dint of the pretty much inherent feeling of connection with another body sharing the same space and time... and yet this version puts so much more into words than into images.

Fair enough, when the original images are Sven Nykvist's you've gotta go a fair way to be as eloquent.