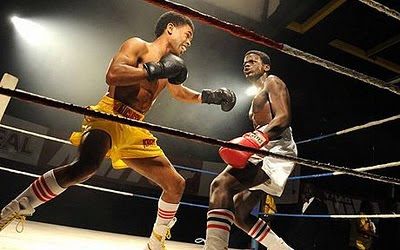 It’s a strange beast, this new play of Roy Williams’s. On the surface of it, it’s a straight-forward tale of a young black lad, Leon, growing up in eighties London which purports to “look back on what it was like to be young and Black [sic] in the eighties” and apparently “asks if the right battles have been fought, let alone won” (cover blurb for playtext programme). Of these two elements, I’d suggest that the latter is by far the more interesting, fertile and successful ground than the former.

After all, the narrative is rather specific: Leon (Daniel Kaluuya) and his friend Troy (Anthony Welsh) find themselves cleaning out their local boxing club as punishment for breaking in before the play starts. Even at the level of metaphor, it can’t have been like that for everyone young and black in the eighties. There aren’t even any black girls in the play. Anyway. At the start of the play, the club’s (white) owner, Charlie (outstanding understated, honest performance from Nigel Lindsay), is concentrating all his efforts on Tommy (Jason Maza), his best hope for the Under-18s ABA Championships. Who’s also white. After a playground-style scuffle at the club, though, he soon spots Leon’s potential.

When it’s not moving the plot along, the dialogue in the initial scenes is heavily peppered with racial abuse (of the sort that both white, male characters claim as “as bit of fun”/“joking”), references to recent events (the inner city riots loom large) and references, cleverly, to only high-street chain stores which have ceased trading since the eighties (Rumbelows, Our Price, etc).

The underlining of the Main Themes does at times veer dangerously close to the theatrical equivalent of those “Do You Remember the Eighties?” TV shows, trotting out the same landmark moments and items of period kitsch. But this is mostly offset by a story which is quite fiercely its own thing.

Granted there are a few clichés there too. The only two white male characters are both basically racists, while Charlie’s daughter, Becky (Sarah Ridgeway) does at times seem like she’s only been thrown into the mix to provide some “love-across-the-barricades” action. But in the main, the plot is much better when dealing with relationships. The whole thing is wrought out of the precarious deals of trust. Leon despairs of his Falstaffian father “Squid” (a name presumably sharing a provenance with Lemmy from Motorhead) (Trevor Laird), who is forever borrowing more money from his son to blow on horses or drink, forms an uneasy alliance with Charlie, who has just had his trust in Tommy thrown in his face when Tommy runs off with a more glamorous manager/trainer.

At one point Squid suggests that “black people” are “Nuttin but crabs in a pot. When one gets to the top, all the others want to do is drag it back down”. Except that this is true of everyone here; all struggling to get to the top and, in the scramble, most, irrespective of colour, not caring who they need to stamp on to get there.

As a narrative, it’s often workaday stuff. Feeling a bit like those endless moral stories about how one shouldn’t “abandon one’s friends on the way up”, or how you shouldn’t “abandon your roots”, which are told across class, gender and race.

The plot itself moves at a fair old pace, with Williams adopting the blink-and-you-miss-them scene changes (in fact, there aren’t even “scenes” in the text), which one associates Mike Bartlett. Glancing at the programme, I see that Sucker Punch has indeed been directed by Sacha Wares who also did Bartlett’s first play, My Child and transformed the Theatre Downstairs into a distended tube carriage to do so.

Here again, the Downstairs has been remade (again by Miriam Buether, who as well as My Child, also created the fighting pit for Mike’s Cock), this time as the seating round a tacky Daily Mirror-sponsored boxing ring, which doubles as the ring in the training room.

It is partially this staging which lifts this play much higher than other recent Williams stagings. Of course, it’s been given a hefty boost by the subject of the play. After all, boxing – just the sheer physical spectacle of two athletic men with their tops off bashing away at each other – is a sort of theatre of its own, while the way that the ring, the stage, towers above the seating also enacts its own urgent dynamism on the space. Coupled with the physicality of the performers, and the whipcrack pace of direction, the more mundane bits of business are constantly being lifted by sheer adrenaline charge, underwritten by another excellent bit of sound design from Gareth Fry – sequencing drum machine rhythms, onstage microphones, and all sorts of aural cut-ups to create a kind of sonic artillery, with Peter Mumford’s lights creating blinding white flashes when punches are landed.

So, yes, if it were just a matter of staging, moments here would be astonishing – with extra points added for Kaluuya’s charismatic central performance. Although I reckon the outstanding bits would have worked for a staging of anything – and indeed might even be the more exciting for having been applied to something other than a play that was actually about boxing. This could have been a revolutionary Hamlet, for example.

So, what’s interesting is, that, away from all the visceral stuff and the plot, the “thinky bit” of Williams’s play is probably one of the most thought-provoking he’s yet offered. As I mentioned at the beginning, the blurb asks if “the right battles have been fought, let alone won”. Now, there’s a lot in the play that suggests this might be to do with an idea that “white people” “love nuttin better than to see two black men beat up on each other. They too afraid to do it themselves, so they get you to do it” according to Squid. Or that “We [white people] hate you” according to Charlie. Since both these father figures are pretty unreliable theoreticians, I’m not sure we should be reading them as the ciphers voicing Williams’s own concerns. Their viewpoints are interesting in the mix, and certainly there is a side of the play concerned with whether Leon is selling himself out to a “white” “establishment”. Except that Williams at no point presents a plausible “black” position which wouldn’t also involve “selling out”. And at the same time, we see white people selling one another out too.

No, the two most fascinating things here are the vast shadow cast by America, and the incredibly careful, almost intricate way that Williams uses language. Perhaps the key moment of the play for me is the moment only minutes before the end (p.82 of 86, since you ask) where someone uses the word “Nigga”.

It’s been completely absent from the show up to that point, where in previous plays about contemporary Britain (contemporary black Britain?), it’s used almost like punctuation.

What the play most interestingly investigates is the relationship of Black Britain with Black America, and how Black America seems to have rapidly evolved and overtaken Britain in terms of emancipation and representation, but at the same time, has a new, harsh proto-neo-con, arch-capitalist agenda behind it.

Coupled to this is a quiet but insistent critique of American capitalism, and perhaps the seeds of questions that Black Britain might be asking Black America. These questions lie very subtly within the text, but are the driving force behind it.

As a play, it barely even frames its bigger questions, as if they only really filtered out in the telling of the story, but if this is the ground toward which Williams is moving into exploring, then his next few plays (no doubt staged before the end of the year, given the phenomenal rate at which he seems to crank them out) might be some of his most exciting yet. And this one isn’t half bad as a starting point.
Posted by Andrew Haydon at 18:22

Bravo Andrew.
For this, your total, abject and disappointing failure to bring anything like the same sensitivity to your crass reading of "Love The Sinner" may one day be forgiven you.

Love the idea of a Dan Kaluuya Hamlet. Think he'd do it brilliantly.