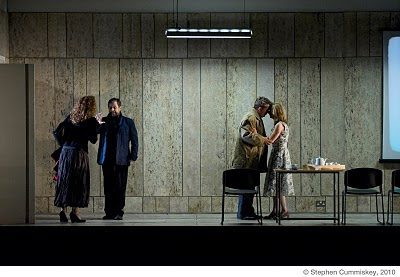 Katie Mitchell’s staging of Mozart’s Idomeneo is a thing of great elegance and intelligence. It also makes a neat companion to her 2007 NT production of Euripides’s Women of Troy. The opera, based on Antoine Danchet’s French text, is another post-Fall-of-Troy narrative, this time concerning the king of Crete, the little-known Idomeneo of the title.

In the beginning, we’re introduced to Ilia, one of Trojan king Priam’s daughters, who has been brought back to Crete by Idomeneo’s son, Idamante. The pair have fallen in love with one another in spite of the decade-long war between their respective nations, but neither has told the other of their burgeoning passion.

The overture is played over a stark, beautiful black and white photograph of the texture of waves on a calm sea, which covers the entire safety curtain, which then rises to reveal the first of Vicki Mortimer and Alex Eales’ many gorgeous sets.

The production is set in scrupulously observed modern dress and settings, achieving non-specific internationality by rendering all the interiors as the sort of expansive, expensive, characterless beige lounges, lobbies and conference rooms of high-end hotels across the globe, conjuring an atmosphere of slick corporate efficiency.

The brilliant thing about these sets, though, is that way that Mitchell and Mortimer/Eales (along with movement advisor Joseph Alford from of Theatre O) have their cake and eat it: at once enjoying the tongue-in-cheek (and frequently laugh-out-loud) moments provided by being able to have a steady stream of suited men walking briskly across the stage, or punctuating the dramatic action with primly officious waiters performing rituals of elaborate hospitality during the more notably twiddly bits of the score, while at the same time still creating beautiful, memorable stage-pictures. Perhaps it’s this constant movement which, as well as bringing the sense of place vividly to life, keeps the pace whipping by so that each hour-long act feels more like fifteen minutes.

What’s most striking about Mitchell’s direction is the level of detail in the naturalism. A lot of opera tends toward either the ludicrously generalised – offering acting and settings which look like a big trifle – or the austerely symbolist – mythic figures in mythic spaces behaving, well, not very much like people actually do in space dominated by a big sculpture. I haven’t got anything against either approach. But, while Mitchell’s approach already yields astonishing results in theatre, it might feel less remarkable there just because such techniques are more expected – indeed, in theatre, it is usually Mitchell’s signature deviations from what appears to be realist, fourth wall naturalism, which mark her out as special. Here, in the context of opera, it’s the intensity of the clarity which with Mitchell delineates the emotional arcs of the four central characters which really sets this production apart.

Where in theatre Mitchell’s almost “fetishistic naturalism” (cf. Krankheit die Jungen) can sometimes feel like a tic or affectation, underscored by Mozart’s music, and subject to the fact that the performers are having to sing, it takes on a different sort of function. It looks as if she has really worked with the singers on their acting, so that they really do have a reason that they are saying/thinking/vocalising/singing even every repetition of each line.

Alongside this emotional clarity, there’s also the recurrent sense of humour. When in the opening scene Electra (Emma Bell), Ilia’s love-rival for the affections of Idamante, blows into the palace/hotel conference suite, in contrast to the sober, dark-suited populace and subdued captive Trojans she turns up in a bright red coat and a look of “What? What’s wrong with this coat?” establishing the character (or at least this characterisation) minutes before she gets a line.

Electra is certainly the most fun in this Idomeneo. The central narrative revolves around the tragic consequences of the king promising Poseidon that he will sacrifice the first person he sees if he is allowed to reach his homeland safely, and then that person transpiring to be his son, Idamante (shades of Iphigenia at Aulis). The romantic subplot leads to Ilia, though noble and pretty, not really getting to do much but virtuously waft about lamenting her lot – touching though this is. So the real dynamism here is found in Electra’s mad cackling and vows of bloody revenge, hilariously overplayed with thunder and lightning flashing outside the windows of Mortimer/Eales’s set, while the princess irritably sends back glasses of wine and picks grumpily at her food. Elsewhere in the piece, where everyone else sings arias about their despair, Electra gets drunk and sings about how she’s going to re-seduce Idamante, while simultaneously touching up a hapless waiter who happens to be passing.

Being Mozart, there’s a sense that what you’re watching is basically a sequence of stuff thrown together with the primary purpose of delighting; a sense of a composer-slash-dramatist, basically contriving ways of giving people stuff that they’ll really like. Scene after scene. Every time the dramatic action might look like it’s about to flag a bit, Wolfgang chucks in some more allegro twiddling. He happily piles up the arias in act two, and then follows them with a massive climactic thunderstorm/tsunami. If there’s a weak point in both the music and the plotting, then it’s the seemingly bolted-on happy-ending in which Poseidon rears up out of the sea and forgives everyone, but even this is rescued by good old Electra going nuts with a revolver shortly afterwards.

The chorus numbers are, to this theatre-goer, impressive even before anyone opens their mouth just because of the sheer weight of numbers and the elegance of the mise-en-scene. And then when they do actually start singing... Well, it’s not all post-baroque showing-off. There are also some seriously beautiful choruses here.

What’s most glorious, though, is this marriage of Mitchell and Mortimer’s modernist sensibilities to Mozart’s ornate orchestration, with the clean lines and crisp direction at once grounding and being lifted by the richness of the music. There’s something wonderful about just the sheer expense and scale of it all, too. And then, because it’s not “theatre” per se, there seems to be less of an anxiety about certain aspects of the staging – covering scene changes with the return of the big black and white photo of the sea seems fine since there’s also the fact of the orchestra playing yer actual classical music. Live. I don’t suppose such things would excite a regular opera-goer very much, but to these funding-starved eyes, it all seemed pretty damn remarkable.

I should point out that the seat I was sitting in was thanks to a plus-one from a colleague, so I’ve got no idea how the production fares from the affordable seats. But if you’re a theatre-lover who has liked Katie Mitchell’s other work and the better part of ninety quid is something you happen to have in your disposable income, then I’d book a ticket in the stalls immediately if I were you. I’m not sure how well it will translate from the higher seats in the balcony, but it might be worth taking a look. If nothing else, it’s just great to see something of this scale on a stage. And then to see that scale handled on such a human level. Actually, it’ll probably still look great from the back of the balcony.

Either way, this is inspiring, brilliantly intelligent stuff.

Edit: Oh, and perhaps thanks to some spectacularly dim reviews in the national press, tickets seem to be a bit cheaper at the moment.