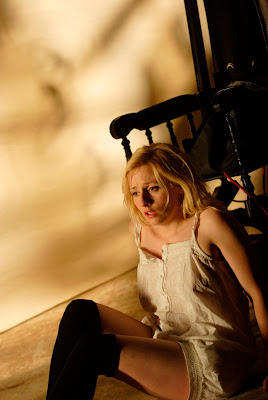 As a text, Lulu seems to have suffered as chaotic a life as its eponymous heroine. Initially conceived by Frank Wedekind as two plays, it has been performed together and apart, frequently cut or banned, mistreated by the authorities, called by various names, remade as a film or opera, and then, unsure of what it is anymore, it ends up bedraggled in London where it is butchered. Only kidding.

But, like Lulu, there isn’t really a definitive Lulu, so the brief of Headlong and the Gate’s annual New Directions award – to adapt and reimagine a classic European text – is almost a given for any staging. However, as in previous years, the rubric seems to have given director/adaptor Anna Ledwich the necessary sense of freedom to go beyond mere restoration and into what reads on stage like something that is almost entirely her own dramaturgically.

Ledwich has stripped the script down to one possible set of bare essentials and rendered them in stark, almost emblematically contemporary language. Indeed, the thing whips by at a little over two hours including an interval. And you hardly feel the time passing. And yet, to the best of my memory, all the significant episodes of the play are still there – or at least, this version runs fairly similarly plot-wise to Georg Pabst’s early film-of-the-play Pandora’s Box.

At the start, Lulu is the worryingly young bride of a wealthy older man having her portrait painted by a dashing, romantically-minded young artist. This is virtually all that is certain. Is she flirting with the artist as he paints her, or is he projecting that onto her? Seeing what he wants to see, or seeing what he cannot help but see? It isn’t giving many minutes of the plot away to note that this first husband soon dies and Lulu immediately takes up with the young artist, establishing a pattern that is to see her through the rest of the play as a sort of cross between serial-monogamist and serial-murdereress, or rather, someone who happens to be in the vicinity of an unusually high number of deaths. More like a curse than a killer, perhaps.

Sinead Matthews’s performance is unsettlingly compelling. She bursts onto the stage like a cross between Bonnie Langford in Just William, Marilyn Monroe and Lolita; childishly energetic and disturbingly sexualised and provocative. What’s unsure is whether the sexuality is knowing or whether she is completely oblivious to her effect on men. This is a tension which is played on repeatedly. Does Lulu know what she wants? Does she ever really fall in love? Does she enjoy sex or tolerate it? Are these men using her or is she using them?

Thanks to the way that the piece uses modern idioms and partially places the scenarios in which Lulu finds herself in a modern context, we find ourselves assessing her along modern pop-psychological lines – did an “abusive father”, as we would now have it, plant the seeds of her troubled psyche? For example.

Ledwich is canny in her choice of contemporary language. The sexuality and relationships get discussed with contemporary frankness and candour, but there’s a total absence of “therapy-speak” and, more importantly, glib, harmful press coinages like “people-trafficking” or “abusive childhood”; coinages which have become so over-familiar that they immunise us to the misery which they denote. It is refreshing, albeit unpleasant, to be reminded of the actuality without the euphemisms.

Not that Lulu is much of a play for dwelling on misery. What’s fascinating is how little, compared to modern plays, the depths of the characters’ psychologies are trawled. Lulu isn’t a play that’s much interested in getting you to understand why the characters do what they do. They just seem to go about doing things. In this respect it’s rather reminiscent of Woyzeck; or what now seems destined to become Alan Bennett’s single most famous line – the description of history as “just one fucking thing after another”.

But Wedekind’s deeply linear, if apparently a-consequential, plotting isn’t the focus here. Indeed, for all that we find Lulu fascinating, she seems to exist at a bit of a safe remove from us and from Ledwich. More “emotional Brechtianism”, perhaps. Because, for all the cleverness on show in the translation, and the lovely performances elicited from a fine cast, the other real star here is the staging. It doesn’t look like it’s going to be, initially. The Gate is laid out other-end-on (the Gate’s space is adaptable, but the lighting box is usually at one particular end of the long, narrow room. This show is pointed at where it usually is), and the right hand wall is rendered as a half-finished tattered construction of wood and thick plastic sheeting. The stage is cut across with more curtaining – plastic, rags, velvet – which each in turn are drawn as the play proceeds. At first, the scrappyness of the look doesn’t seem to serve much purpose beyond a kind of impressionist naturalism. By the end, the sense of the stage deepening, particularly the removal of the “final curtain” (deliberate My Way gag?), has created a real feeling of movement, of the stage evolving to fit and accommodate the play or the narrative.

There are nice “Headlong-y” touches too – the best involving The Smiths’s I Know It’s Over, actor Michael Colgan and a whole lot of stage blood.

Actually, the soundtrack deserves a full-length review all of its own. Watching the play I’d lazily assumed that sound designer Carolyn Downing and composer Alex Silverman had done a few bits and pieces with a computer and then used a lot of found music by the likes of Monroe Transfer, Godspeed You Black Emperor, Arcade Fire and maybe some late-period David Lynch soundtracks. Wrong. All the music you hear in the show – beyond Marilyn Monroe’s I Want to be Loved by You and, oh, another pop song (someone remind me?) – including the cover of I Know it’s Over were recorded specially for the show. And it’s great. The music is also brilliantly mixed into the overall soundscape of the piece – with clattering guitars fading in and out of the sound of cities at night.

Similarly, Helen Goddard’s visual design is at once cleverly specific and bluntly non-committal. I mean this as a compliment. Everything that appears on stage, everything that everyone wears, looks like it has been carefully chosen and thought about, but none of it adds up to a specific “period” costume, nor does anything read like “an anachronism”. At the same time, costumes both conjure particular periods and perhaps usefully tie specific moments to particular tropes. In a sequence where Lulu poses as a photographic model for a Countess (who, on press night, was startlingly well played by the director herself after Caroline Faber suffered an injury), for example, Matthews is dressed not unlike a Bettie Page type pin-up from the fifties. It feels like there’s plenty of iconographic temporal travel, with no especial purpose other than to best present the scene. Perhaps there’s a more complex matrix at work, but if there was, I wasn’t reading closely enough to pin it down and offer a translation. But I’d be more than happy to believe there was something cleverer than necessarily-needed-to-be-spotted going on. It was that sort of production. Intelligent, carefully thought-through and worked on, but not *off-puttingly referential. If you don’t see any more than the play, then it still works, but there’s certainly more, both transparently and perhaps opaquely, going on beneath the surface for those who like their theatre more “readable” than “legible”.

So, in conclusion: it’s a bit of a strange original; not, perhaps, offering much for those interested in emotional engagement to get their teeth into. This is a clever, intelligent staging, with interesting decisions from the supporting cast and a remarkable central performance from Sinead Matthews. It’s also an excellent calling card for the director. Here’s hoping that even away from the New Directions rubric this is the sort of production we can expect more of from Ledwich, Goddard, Downing and Silverman in the future.