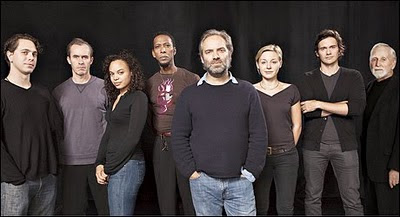 Curiously, for a production which shares cast, set, director and designer with As You Like It (see above), the Bridge Project’s Tempest is actually several shades more hopeful.

It doesn’t start promisingly. The trees from Tom Piper’s post-apocalypse squash court set are gone, but it’s still awful dark, and Ariel’s sixth-form devised-piece antics with the Milanese & Neapolitan seamen conjuring the tempest are nothing to boast about at parents’ evening.

But then Stephen Dillane’s Prospero kicks in. And he’s very good. Part of it is that we’ve seen Dillane do other stuff (in fact, wasn’t he in the last major London revival of The Real Thing? Yes, he was. At Mendes’s Donmar), and he’s not *that* old. So instead of the usual wizened wizard with a stupidly young daughter, we’ve got a plausible deposed duke who just hasn’t been able to get a decent shave these past twelve years.

What’s also nice about Dillane’s performance is that he speaks the lines as if he were a human being talking sense. Indeed, he even mumbles a fair few into oblivion, but this feels like a small price to pay for having that interminable opening exposition scene explained by a person rather than in the usual pompous magisterial sort which crucifies most Tempests before they even get going.

The shipwrecked nobles are fine. They’re dressed unimaginatively in the cast-off costumes from Kenneth Branagh’s film of Hamlet, but since they’ve got to wear something, those are perfectly god things to wear. And while the characterisations are nothing special, they’re serviceable enough.

Conversely, Christian Carmago, who had made such a catastrophic Orlando, makes for quite a passable Ariel, dressed like a New York new waver circa 1979, with his pretty boy looks and sullen blank stillness making a preferable reading of the part to the usual high-voiced capering and scampering that actors often seem to feel the need to adopt.

Annoyingly, all the scampering and capering seems to have been left to Ron Cephas Jones’s Caliban. Although given the external factors pointing to potential for over-doing the possible post-colonial readings of the play, it’s a pretty straight-forward, and even intelligent version of a creature that no one ever seems able to pin down.

In fact, as Tempests go, this is most defined by its clarity. In most other respects it’s a bit like a compilation tape of other recent “straight” Tempests (it’s remarkable that a play that has so many fantastical elements so often seems to end up looking exactly the same), but at least it’s one that knows where it’s going, if not precisely why it’s important that it does.

Piper’s set benefits enormously from the removal of the “forest” at the back, which is replaced by what I presume is a sort of reflective-bottomed moat against the back wall (from the stalls, you can’t see any water, only the dappled reflection of water playing on the walls). The net effect is strangely reminiscent, at times, of scenes from Peter Greenaway’s earlier films (not Prospero’s Books, happily) – I can’t find precise photographic evidence on Google, but I’m pretty sure there’s stuff like it in Drowning By Numbers and A Zed and Two Noughts. Anyway, it looks jolly nice and goes a long way toward making amends for As You Like It. Downstage there’s a large-ish circular sandpit which neatly allows us to imagine the rest of the island being viewed and interfered with from Propsero’s cell, which actually works well as a way of containing the play’s many location changes without all the awkward faffing about of, well, As You Like It.

But, for all this acuity, the thing does begin to drag after a while. I’m not sure if it’s always going to be played without an interval, or whether that was just to get press day over and done with in an acceptably short time, but it definitely needs one. There’s not so much momentum going on here that it wouldn’t benefit from a bit of breathing space.

As for the rest, there’s some pleasant music (though much of it sounds like Michael Nyman’s score for The Piano and none of it is as good as his masque music from Prospero’s Books, sadly), and well, not really much by way of a ‘take’ on the whole thing. By the end, you get a good idea of what happens in the play, but very little idea of what attracted Mendes to it, beyond a desire to prove his competency at making stuff clear. That said, it does “wistful” better than any previous production I’ve seen. The point where Prospero and Gonzalo are reunited is actually touching, and this is the first time I’ve heard the line: “We are such stuff as dreams are made of” related with regret – that being of the same stuff as dreams, rather than the usual “magical” reading, is like admitting to a total lack of substance, an ephemerality.

In short, some lovely moments, but not nearly enough to keep the whole afloat.
Posted by Andrew Haydon at 18:39