[Rather than being an attempt at a review – which would be crass since I don’t speak German, this is offered in the spirit of a “Walk-through”. It’s an idea for reviewing I’ve been thinking about a lot recently, following my reading Tim Etchells’s excellent first novel The Broken World, about which I want to write much more soon. The set-up of the novel is its narrator writing a blog that talks its reader through the many levels of a computer game. At various points, the narrator’s own insights and thoughts penetrate his straightforward descriptions and advice on the game’s content. I guess that’s what the following sort of does too] 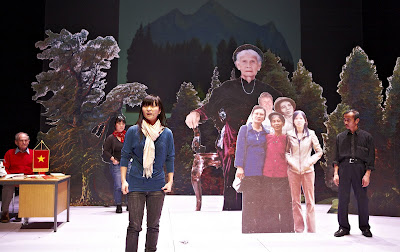 As I remarked in my prefatory note on Prague yesterday, Vùng Biên Gió'i marks the first time I’ve actually seen Rimini Protokoll in yer actual, proper, conventional theatre (Prague’s ugliest and most Communist). I was surprised by how strange I found it.

As you’ll probably know, if you’re a regular reader, Rimini Protokoll are an enormously exciting Swiss/German theatre company, who, I think I’m right in saying, are partially attached to the Hebbel Am Ufer theatres (?).

(There are three, collectively referred to as the HAU. Hebbel was a 19th? century playwright and the Ufer is the river next to which the original Hebbel theater, is situated. It’s also worth noting that HAU Zwei does excellent pizzas, has a great bar and is in the building that used to be house the Zodiak Free Arts Lab where, Tangerine Dream and Kluster formed/played a lot, while at the same time housing the Schaubühne theater prior to its1981 move to its current location in Lehniner Platz).

RP are exciting primarily because they’re so inventive and smart. They seem to be making new, fairly unprecedented work on an almost continual basis. There’s a great post by Ant Hampton on their show Heuschrecken here, and if you check HAU’s website they seem to have new shows going up there almost all the time (ok, not this month, but…). They make urgent, live, discursive/documentary theatre that feels like it is informed not only by global concerns, but that seems as if it started to achieve a global reach. You get a sense of what the theatre of globalisation might actually feel like.

I admit I’m a bit vague on the details, but the sense you get is of this tremendous energetic collective constantly arranging new pieces and firing them off to festivals and theatres. They also seem to get specifically commissioned a lot. I think I’m right in saying that Vùng Biên Gió'i was made especially for Pražský Divadelní Festival Německého Jazyka.

Its subject is Vietnamese immigrants living in Germany and the Czech Republic. And, in particular, those living in a town right on the border between the two countries. In common with many (well, all, in various forms) of RP’s other pieces, the show does not use “actors” or “performers”; instead, everyone who appears on stage is talking about themselves, or telling other stories from their own personal perspective.

The performance style is incredibly free and unforced. As I have previously discussed, this might be to do with the German language, but in this case, since only one of the speakers – a former German border guard – has German as a first language, it seems likely that it is much more to do with a very specific and evolved performance style – which at the same time is no style at all (all this feeds back to the very necessary discussion prompted by Chris Goode’s comments following my Everything Must Go review to which I have yet to respond). This “style” really doesn’t feel forced at all. The speakers are all radio-miked, so their tone of voice is entirely conversational. They are just people being themselves (big “just” there, I know, but that’s how it *feels*) explaining something to a large group of people in a room. It reminded me of what Nicholas Ridout says about stage fright in Stage Fright, Animals and Other Theatrical Problems (not that I especially buy the notion, but…) he seems to suggest that it emanates from the anxiety of the pretence at trying to *be* someone else (that’s a really, really slender summary of a very long chapter, which I might have got wrong, but it’s one of the things the piece made me think about anyway).

Oddly, unlike with Der Prozess, I found it much easier to follow Vùng Biên Gió'i. Perhaps this is partially because I was mostly listening to other non-native German speakers, and so perhaps at least the older “cast” (?) members, were speaking at a speed I could hope to comprehend bit of, or perhaps it was the internationalism of a lot of the words. It sounds like an advertising slogan, but “Communism” seems to be pretty much the same in most languages.

The show was about 1hr 50 and covered an awful lot of ground. Each performer told their own particular tale of how they came to be in Germany or Czech, there were charming anecdotes, complex anecdotes, a lot of explanations about how their situation has changed over the years. How they make money selling knock-off Ostalgie souveniers or bootleg cigarettes. How these jobs can be more lucrative than anything they might get even after a university education (as a biologist, as one girl said?). These personal narratives and narrations – frequently illustrated with either live feed video projection or with the actual mobile crates from which they sell their Eastern Bloc combat fatigues – are frequently interrupted by a general question posed to all the participants: “What is your experience of bombs?”, “How did you travel?” etc. The questions are posed by LED text scroller. The answers to the first were accompanied by the performers throwing those little paper cap bombs at the floor.

Photos of the participants are also shown on the live-feed, while giant cut-out, blown-up photographs of various people they’re talking about and a very German-looking pine forest are brought out and rtanged on the stage.

What was particularly fascinating for me, a Briton sitting in Prague watching a German show about Vietnamese immigrants, was the sudden total perspective shift that came with the realisation that these weren’t necessarily “economic migrants” or “asylum seekers” as we seem to assume everyone foreign is in Britain. Many had come to East Germany or Czechoslovakia under favourable terms arranged between the DDR or the CSSR and the Vietnamese. When the East Germans were short of workers, they’d apparently advertise the fact and encourage Vietnamese workers to come over in the spirit of Socialist Brotherhood. (I’m probably taking massive chunks out of the nuance here, so if you’re interested in the subject, do, for God’s sake, do some reading round and don’t just quote me).

I hadn’t really taken on board that Vietnam’s communism had been sponsored by Moscow rather than Beijing, – hence the massive American resistance to it, compared with its failure to bat an eyelash at Cambodia’s China-sponsored Communist revolution-cum-genocide. It was quite strange to see the story of post-’89 eastern Europe told from the perspectives of those who had come from the last country to actually defeat Capitalist America in open warfare.

As a piece of theatre, the thing had that strange Rimini Protokoll sense that somehow, through careful dramaturgy and playful elements, there was a real flow of the ideas which coalesce to create an impression greater than the sum of the component parts. The extra elements, the singing, the staging, all combine to make this feel like the most explicitly political show I’ve yet seen by the company, who, while not making explicit comment on the macro situation, evoke it through the intersections of the micro-narratives. As something to watch, it felt maybe twenty minutes too long, although I’m more than prepared to accept that this may well be down to my having to concentrate about fifty times harder than anyone else in the auditorium to understand it. Because it’s so specific, it feels like a transfer here might be a little oddly superfluous, but then, as I say, the sheer culture shock of realising that Vietnamese immigrants to Eastern Europe, or the former Eastern Europe (some of the “performers” arrived post-’89) came from a very different tradition of migration than the one which the British press paints as a near uniform narrative for those coming into Britain. 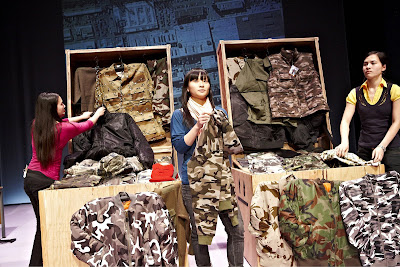 Video clip: the other thing the show reminded me of was Jean Luc Godard’s film about French student Maoists, La Chinoise, which – I hadn’t realised until recently – is in fact based on Dostoyevsky’s novel Бесы.