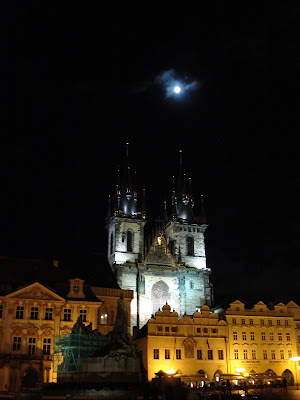 To Prague for Pražský Divadelní Festival Německého Jazyka (Prague Theatre Festival of German Language [theatre]). On the Thursday before flying out to Czech, I happened to be doing a Q&A session with the students of Central School of Speech and Drama’s Writing for Stage and Screen MA which is taught by my friend, the playwright John Donnelly. Along with questions about “being a critic”, John was quite keen that I talked to them about my experiences of mainland European theatre, and specifically how they relate to the role of the writer. I mention this only because it was one of those times when you discover what you know (or, at least, what you think you know – and I’m very much still learning) as you’re trying to explain it.

Granted, I probably spend a disproportionately large amount of time thinking about mainland European theatre and its relationship with Anglophone theatre (not having seen much Australian theatre, I’m just guessing from the plays I have seen produced over here, the ones I've read and production shots I’ve seen, that it doesn’t differ too wildly from our own or American traditions, at least in terms of staging and how plays are thought about (at least in the mainstream)), but nonetheless, I had a revelatory moment during the talk: It had never really stuck me before how much of what we might call mainstream subsidised theatre practice – at least in Germany (but also, seemingly, Poland and Czech) – is actually “text-based”.

Recently it feels as if that annoying (and, I’d argue, mostly spurious – cf. Field) division of work into “text-based” and “devised” has subsided a bit, at least as a bone-of-contention/source-of-conflict. On one hand, everyone (in Britain) now seems a bit happier with the idea of plurality, apart from the odd occasion when someone blunders in with a misplaced “proper” or “better”. On the other hand, it feels like much work in the past couple of years has served to make the debate seem either misplaced, or has usefully and critically changed assumptions about the terrain. Seeing Tim Crouch’s The Author (The Author! for heaven’s sake!) Upstairs in the Royal Court felt like the moment when we all happily crossed the Rubicon together and everyone, whatever prior (fictional) allegiances, could agree that this was A Jolly Good Thing.

(Another example: the following night, after Slung Low’s They Only Come At Night: Visions, which I was reviewing for Time Out, I was chatting to Jerry Killick who told me he was currently working with Forced Entertainment on devising their new show. I confessed to being very surprised by the word “devising”, since recently I’ve been thinking more and more of Forced Ents’s work as essentially written work – and more likely than not, work written by Tim Etchells. I’ve no idea if this is any more the case for Spectacular or Void Story, but it was a useful reminder of how little can necessarily be assumed just by watching a thing. It’s more the way in which things get presented and promoted that leads to assumptions.)

What’s actually different is the perception of pre-eminence of The Playwright in Britain. “I’ve been to see the new Simon Stephens”, or “the new Tim Crouch”, or “am looking forward to the new Alan Bennett”. “I’ve been disparaging the new David Hare”. It pretty much conjugates itself. The only two irregular verbs, so to speak, are Katie Mitchell and Rupert Goold. Perhaps in the case of really, really established classics (Shakespeare and Chekhov only?), it’s more likely to be “Simon Russell-Beale’s Hamlet”, or “David Tennant’s Hamlet”, or “Kenneth Branagh’s Ivanov”. Did anyone care who’d directed them?

What I’m trying to pin down, very circularly indeed, is the way that German theatre seems to function – at least to my eyes.

Essentially, it seems to be far more likely that one will be talking about the director of the piece then either the writer or a star actor (that said, I do seem to end up seeing more Regietheater than New Writing at festivals for some reason). But this shouldn’t obscure the fact that their theatre is very “text-based”. That is to say, the director – whatever they’re doing with the design of the production – seem still to work from the text up. There’ll likely be weeks of discussions between the director and actors about the text. That this can end up with productions of texts that look to our (I would still argue) more conservative eyes (ok, let’s not say “conservative”, let’s say “differently acclimatised eyes”) that look like they’re miles beyond the strangest works of the “upstream”. At the same time, this version of working with the text can include some cutting, perhaps even of new plays. But then this seems to be true in Britain’s New Writing culture too.

The best two examples I can think of off the top of my head are the disparities between the printed texts of Alexandra Woods’s Unbroken, directed by Natalie Abrahami at the Gate and Joel Horwood’s Food, presented by the Imaginary Body at the Traverse in 2006. With the latter, it was a case of a writer collaborating with a devising company and the script being worked through well past the point when a draft had been sent to Nick Hern. In the former case, it *felt* (and this is nothing but a guess) like a director had taken a red pen to the lines she didn’t fancy. So, even within our “Writers’ Theatre” perhaps it’s not so radically different on some levels.

One of the things that was fascinating for me in the case of the first show I saw in Prague – Andreas Kriegenburg’s Der Prozess (Kriegenburg being the director, natürlich) – was that the publicity material reads:

All pretty self explanatory. The top line is pretty much unavoidable, and the bottom line makes perfect sense in terms of billing given that this is a festival of German theatre in Prague, and the way that German theatres operate – i.e. as buildings that can be identified as artistic endeavours – i.e. they seem to tend to go one step beyond an “artistic policy” and into dramaturged seasons of premieres (although these premieres also run alongside the theatre’s repertoire – which, thanks to a standing repertory company, can often been a show that was premiered over ten years ago – shown maybe once every month/few months).

So: dates, times and place; fine.

But look at the author credit. It’s not “Franz Kafka’s The Trial” (cf. “Bram Stoker’s Dracula”). It’s presented like a writer credit. Now, my German’s not great (read: non-existent), but even I’d be willing to swear that there’s no way they staged the whole 200+ page novel in two and a half hours. There was certainly a sense that they were, in part, playing with the edited text of the novel, there were various “he said”s and “she said”s, but obviously it had been cut, it’s a work of adaptation. But no writer credit, no dramaturg credited and no suggestion of “devised with the ensemble” – nor much of a feeling of that later process either, although, as I suggest above, I’m not convinced spectators are necessarily the best judges of that.

Similarly, the next night, Rimini Protokoll’s Vùng Biên Gió'i - Regie: Stefan Kaegi. Sure. No problem. Except: everyone on stage was speaking pretty much solidly through the show’s one hour fifty minute duration. And what they were saying was definitely scripted, because there were pre-prepared surtitles.

I guess this element of scripted-ness surprised me slightly, as I’ve always tended to think of Rimini Protokoll as a company who deal very much in Liveness. In actual fact, I suppose this actually varies considerably from show to show. My first encounter with them (or at least with Stefan Kaegi’s work) in Soko Sao Paulo did actually have non-actors speaking prepared bits of text, albeit ones of which I think they’d at least written the first draft themselves. The point was this was real people telling their own stories in their own words. The dramaturg’s hand (postdramaturg?) was not much in evidence (although, given that the non-actors were speaking in German or Portuguese, I couldn’t swear to it).

In Call-Cutta in a Box I remember it was the scripted element of an apparently “live” encounter with a call centre worker in India (via first Skype phone and then web cam), which caused my colleagues from FIT Mobile Lab most problems – in a way not dissimilar to the discussions about agency occasioned by Internal in Edinburgh this year.

But, on the whole, Rimini Protokoll = Live, I reckoned. Or at any rate, not “authored”. In actual fact, Vùng Biên Gió'i was the first time I’d seen the company in an actual theatre building. Nevertheless, all the central elements were still in place: the people were all precisely who they said they were and the stories they were telling were their own. As such, it surprised me even more to imagine that the whole traffic of the stage would be written down somewhere – possibly with lighting cues scrawled all over it just like a LX copy of something by George Bernard Shaw or David Hare would have – and yet, no writer was credited. Perhaps this is because “Regie: Stefan Kaegi” covers the whole creation of the work.

While I was in Prague, I also happened to watch a video of Michael Thalheimer’s staging of Gerhard Hauptmann’s play Ratten at Berlin’s Deutsches Theater. It was perhaps this that made me appreciate more than anything else the direction in which my thoughts had been headed concerning the way in which we perceive German/“European” theatre “over here”.

The play is a 1912 straightforward tale of a childless underclass couple who try to buy a baby of a pregnant Polish prostitute. I imagine it being something like a cross between Gorki’s Lower Depths and maybe a cheerless Shaw or Granville-Barker, full of social comment and miserable characters. The point being, it’s an old-fashioned, well-made play. Now go look at that YouTube clip. It’s basically a modern dress production of an old fashioned play. I’m afraid I don’t know the original script at all, so I couldn’t tell you if the text has been cut, mucked about with, or modernised, but it was my impression that it hadn’t been. And yet, it’s Olaf Altmann’s set that really changes things. You can’t get a real sense of it from the clip, but what the letterbox format of the set essentially does is ensure that no performer can stand up straight throughout the show. In one sense it’s *just* a staging of a play. And, on a really, really basic level, you can see precisely how imposing such a metaphorical space on the actors absolutely *is* “serving the text”. And yet, it’s absolutely *not* like any approach I’ve ever seen here in Britain.

So, to conclude very briefly, having stalled this piece for over a week and written parts of it into other exchanges elsewhere now – not least my most recent Guardian blog (well, the original draft anyway), I think I’m still trying to figure out how/why it is the mainland European theatre *feels* different to British theatre, even when it often appears to be springing from the same starting point. I’m now thinking a lot more about the dramaturgical application of design. The way design is used as an extra character or comment on the piece. This might well bleed into how I write about British theatre in the interim. Which will probably get on everyone’s tits. Ok, I’m just burbling now. Time to post.

Any useful questions to refocus/repoint this piece gratefully received.

"everyone, whatever prior (fictional) allegiances, could agree that this was A Jolly Good Thing."