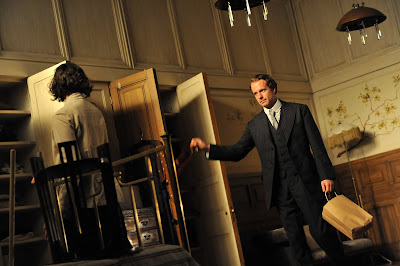 If we didn’t know so much about her working methods, it’d be tempting to suggest that in the spirit of some impish joke, Nick Hytner actually employs two directors called Katie Mitchell. One does stuff with video cameras and sound effects and producing live video images, the other committed to a kind of Stanislavskian naturalism to the point of near absurdity.

It’s this second version that the NT has hired to direct Austrian Ferdinand Bruckner's 1923 play Krankheit die Jungen. Set in the living room/lobby of a student flat, the piece deals with a set of (mostly) youngish medical students as they hang out, falling in and out of love and bed with one another. Kind of like an accelerated, downbeat, philosophised version of Friends, if you will.

Naturalism to this extent almost feels like some sort of perversion. It feels fetishistic, almost hysterical. In this respect, it rather suits the post-Freud feverish atmosphere that the students inhabit. But that’s about the only respect. The only departure from this studied realism is the completely theatrical scene changes. These are performed (in all senses of the word) by the members of the cast not involved in the interrupted scene entering in sharp black designer suits, the women in notably high heels for stand-in stage managers, and variously they remove items not wanted for the next scene into clinical-looking plastic bags, or solicitously insert a smoking half-cigarette into the waiting hand of an actor. Drinks are poured with a conjuror’s flourish and then they depart, like chic Scene of Crime Officers from the fashion police.

These scene changes at least feel like a clever joke on Katie Mitchell’s part against herself; as if slyly acknowledging that naturalism of this order is ludicrous. But the rest of the time, the business of studiously being “in the room”, is taken deadly seriously. So much so, that you gradually notice that no one in real life actually concentrates that hard on appearing to be where they actually are. It’s very strange and very disconcerting. It’s almost like a performance of a performance of performing. It’s not that it isn’t “good”, whatever that means, it just feels deeply weird, like something that’s ordinarily so conventional is trying extra hard to problematise itself. Not that I know Mitchell’s mind, but I’d be willing to suggest, this isn’t necessarily her intention.

It’s interesting that what I ended up watching here was the way that the play was done. In part, I’d put it down to the (ironically) V-effekt of its naturalism, but also to the way in which the play is constructed. First staged in 1926 in Vienna (precisely where and when the play is also set - although the programme is rather confusing on this point) you get the impression that while the play itself isn’t especially opaque about its concerns, they would have actually fed much more specifically into the Austrian national imagination of the time. Perhaps this is also a condition of Mitchell’s staging, combined with a nervously copious context-filled programme, offering essays on virtually every conceivable aspect of the period, from the origins of the dances the girls do to the post-Austro-Hungarian empire atmosphere of inter-war Vienna. There’s also the usual stuff about Hitler and Freud, although with perhaps a little too much hindsight-based emphasis on the former given the year and country of the play (yes, Hitler might have been born in Austria, but he’d buggered off to Munich in 1913, was only just out of prison and leading a very minority German party in 1926).

So, what do all these factors leave you watching? Well, it’s an engrossing two and a half hours (inc. interval). The travails of the students' love lives are interesting enough. But, although I’m wary of using the words “cold” or “clinical”, it does feel here like the interest is at something of a remove. This isn’t gutsy, heart-wrenching stuff, but at the same time, the socio-psychological musings of the students now feel more like fascinating items of historical interest rather than plausible designs for living. You find what’s happening engrossing, but given the turns the plot takes, it feels like there’s a crueller, more involved production possible. However, Mitchell’s version (or perhaps it’s partly also Martin Crimp’s translation) opts for “detached”. It’s cool and spiky, but not in the least bit moving. As such, it’s hard to really rave about it, even though the cleverness, precision and techniques are beautiful. 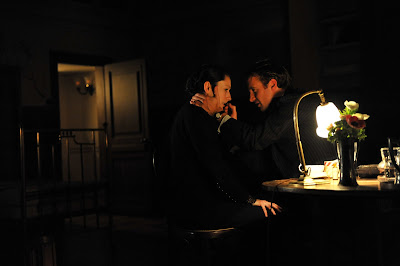