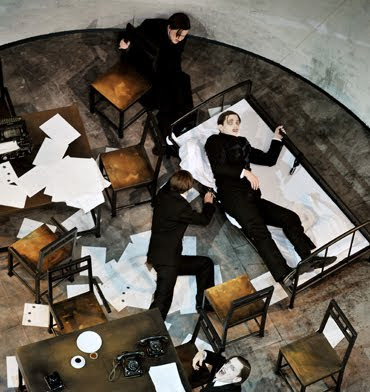 The most striking thing about Andreas Kriegenburg’s production of Kafka’s The Trial is the audacity of the visual concept. The thick safety curtain rises on a gasp-making (and vertigo-inducing in this already too-high-up-for-comfort viewer) bird’s-eye-view of Josef K’s room. Suspended mid way between stage floor and ceiling, and viewed as if at the bottom of false-perspective walls which reach out meeting the stage proper at the bottom and disappearing into the flies at the top.

The room is circular and the walls stretch out in a way that none-too-subtly also suggests a vast eye. The walls are rendered in white/gray concrete while the floor of the room itself, two desks and numerous chairs are a warm wood, the floor is scattered with white pages. Three identically dressed performers (black four-button blazers, trousers, side-partings, moustaches, the essence of 20s MittelEuropean bank clerkery) are seated about the room looking perfectly relaxed and clattering away on typewriters – magically not falling off the vertical desks to shatter on the (real) floor below – in spite of the fact that they’re suspended at ninety degrees against gravity. 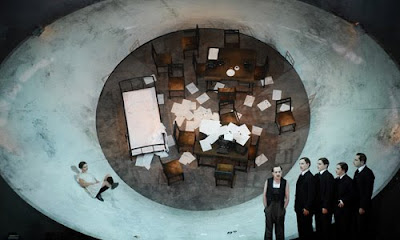 And then the floor of the circular room starts to revolve. Clockwise.

You can see the problem, yes? It’s all well and good if performers have got into position to appear seated or lying on the bed before the curtain rises. We’ve all seen this sort of false perspective done before on a fixed plane. But this one was turning.

As I might have mentioned a million times before, my German isn’t up to much, so I’m afraid this “review” is going to be a lot more describey than, y’know, usefully evaluative of the overall experience.

The performances are largely conducted in that very calm, conversational German, which friends have pointed out are largely a matter of the difference between the way that German and English are spoken as languages. Gradually the piece is revealed to have eight performers (of mixed gender and age), all dressed in the same identical moustache, side-parting and suit, and all variously taking or narrating the role of Josef K (either solus or in chorus) as well as playing his interlocutors. 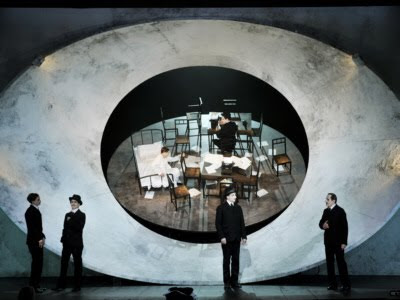 The conversational tone of their exchanges, without the advantage of comprehension, was such that I actually paid a lot more attention to the giant spinning floor at the centre of the eye. But, frankly, that was more than reward enough. As the room gradually rotated, performers not involved in the scene – or sometimes ones who were – (although “scene” makes the whole thing sound a lot more unit-ed than it felt) would clamber about on the turning landscape of desks and chairs, sometimes making a concession to looking like they were behaving as if the room were horizontal, sometimes simply trying to cross from one side to the other as if trapped in a Harold Lloyd nightmare. It’s hugely entertaining.

Sometimes the revolving floor also lowers – away from the eye/walls – to become a slowly spinning disk behind the main action. Performers can then indulge in walking on the spot round the edge, sitting normally at the desks or lying on the bed. However, the floor never stays flat for long, and soon it’s back up to vertical, or else halted at an angle, with the performers once more sliding and climbing their way across it. 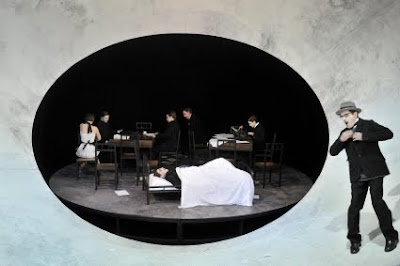 That’s the first half anyway – during this, there was also a neat scene in which K. meets Fräulein Bürstner (who, in a rare concession to characterisation, has changed out of her suit – although retains the moustache and side parting). The scene is played with maybe only two or three Josef Ks (each physically removing their predecessor and insinuating themselves into his or her place), while the rest of the cast, laid with their heads under Bürstner’s skirts, rhythmically blowing into them, causing them to rise and fall throughout the scene. 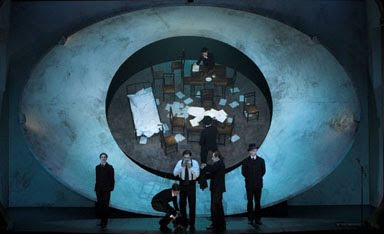 The second half (well, after the interval, probably less than half the whole running time) sees the room floor set replaced with a stark white disk, with five black poles sticking out of it. For much of the section, five actors hang from these, monkey- or possum-like, gently swivelling round as the circle rotates, while in the foreground animated or laconic long monologues are delivered. 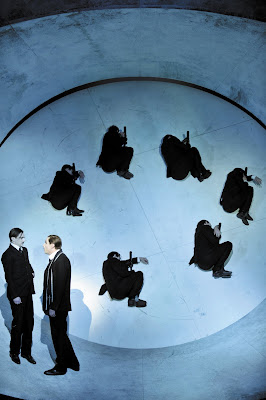 The whole effect is very beautiful. Even without understanding the language, it is evident that these are beautifully controlled, very precise actors. Wonderfully animate, and yet incredibly understated. 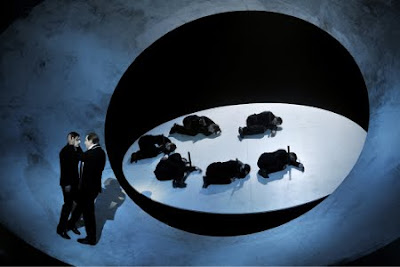 Quite how well it works as an adaptation of the book, it is hard to say – hell, my familiarity with that isn’t what it could be. The Czech review the next day suggested that while obviously accomplished, this (former-West) German take on Kafka’s classic (the production originated in Munich) might have been a bit remote and hypothetical for a nation that still feels the effect of having lived through the reality of Kafka’s fiction. It would be fascinating to see how it worked in the Barbican (pretty much a perfect space for it, I’d imagine – possibly a bit too wide/high, but I don’t imagine that would be an insurmountable problem. Perhaps reading the surtitles might distract from the sheer visual loveliness of it, and I can’t begin to comment on the text, but, while this was slow and almost too deliberate, the constant turning wheel made it feel almost Zen at times. I imagine that at least a section of the British public would find much to admire. 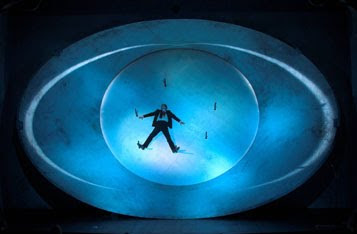 I was a theatrical photographer for three decades on the West Coast. Visit my sight if you want to dialogue. www.jandeen.com