The Habit of Art - National Theatre 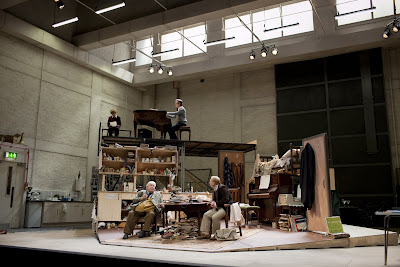 There’s something rather charming about the way that Alan Bennett’s latest play appears to side-step that most boring of critical questions: “is it actually any good?”

As a play, no, I don’t suppose it is. It certainly doesn’t quite behave like a “proper play” should. Playwrights who spend months and years fine-tuning and re-drafting their work into a perfect shape may well find they have cause to feel irritable.

What Bennett’s done is have a go at writing a proper play. One which seeks to dramatise the twilight years of W.H. Auden and Benjamin Britten, and then, having decided that his play has too many problems to solve, has thrown up a protective frame around it by showing this initial play being rehearsed.

Thus, any problems that the play-within-The Habit of Art (called “Caliban’s Day”) has, become points of interest and potential comedy. Rather than feeling awkward about lines that clunk or devices that don’t quite come off, we are licensed to find them funny or ridiculous.

On one hand, it feels a lot like cheating. On the other hand, it works rather well.

Having scrupulously avoided reading up on the thing before I saw it, I am pleased to discover that Bennett has fulsomely admitted that this is the case.

[Finding this review harder to write, than I’d like, it’s hugely tempting to stick in the same device.]

We get two plays for the price of one: Bennett’s Auden/Britten drama about two great artists – their temperaments, their artistry, their homosexuality and their attitudes to biography – alongside which, we are presented with a commentary on the creation of such biographical plays, bits of stuff about the National Theatre and the business of writing and acting in plays (though not, significantly, about their direction).

The effect of framing “Caliban’s Day” with The Habit of Art is to lift the potentially over-heavy original and allowing some much needed lightness to circulate around it. It possibly says something about Bennett’s limitations as a dramatist that he feels the need to do this in the most literal manner imaginable, but the net effect is not dissimilar to the way in which younger, less naturalistically concerned companies deploy a similar effect. There’s an extent to which one wishes that he hadn’t done it in a way that feels like it is disingenuously apologising for itself, but one is nevertheless ultimately grateful that the effect is there.

It also means that Bennett is free to send Caliban’s Day up a good deal more than he might otherwise have felt licensed to. Some of the funniest bits concern a latex W.H. Auden’s mask and sections in which the “writer” – a very un-Bennett-y fictional chap called “Neil”, intelligently played as sulky and earnest by the equally un-Bennett-y Elliot Levey – has seen fit to deliver some very silly dire poetry into the mouths of pieces of Auden’s furniture.

[Aha! Reading Bennett’s own piece on Habit, after finishing this, it’s rather satisfying to see: “The stylistic oddities in The Habit of Art – rhyming furniture, neighbourly wrinkles, and words and music comparing notes – may just be an attempt to smuggle something not altogether factual past the literalist probation officer who’s had me in his charge for longer than I like to think and who I would have hoped might have retired by now.” Excellent.]

There’s also a fair amount of enjoyable actors’ banter. Richard Griffiths playing “Fitz” playing Auden essentially reprises his role as Hector from The History Boys while Alex Jennings as “Henry” playing Benjamin Britten has a nicely bitter line about how the critics will probably just praise his “efficient performance” – which , curiously, is pretty much what I would have done, if he hadn’t drawn my attention to it. In fact, Jennings turns in three quite brilliant performances – one as the almost regally camp Henry, a totally different performance as the diffident Britten (although one wonders if it’s Jennings’s performance of Britten or Jennings’s performance of Henry’s performance of Britten), he also doubles as Henry standing in for another actor (who’s in a matinee Chekhov and so can’t attend rehearsal – although he turns up for a bit in suitably hilarious, incongruous heavy Russian peasant costume). But like Henry says, it’s all done so well, you barely notice it is being done at all.

You’ll notice I’ve said a lot more about the “how” than the “what” so far. Post-fact, it feels like there’s an awful lot more “how” to talk about. Actually, while you’re watching it, there’s an awful lot of “what” going on. Bennett’s play is, after all, a work of incredible condensation. Two major biographies, not to mention a fair amount of detail about the biographer Humphrey Carpenter himself (Adrian Scarborough, again perfect, apparently without effort) are being staged here. As such, there’s a lot of factual detail mixed in with the quotation-heavy, ‘what’s it all about, anyway?’ dialogue (C.S. Lewis’s “fucking elves” description of Tolkien’s fiction gets a (reattributed) look-in, as do lines by Coleridge, Spender and Larkin). If this were written by a younger playwright, one might call the thing richly allusive, or even, God forbid, postmodern, but because it’s by Alan Bennett, it doesn’t really strike you that way.

It’s also interesting, in common with The History Boys, that it feels like it is set at least a good thirty years before it’s meant to be set. Caliban’s Day, is a remarkably old-fashioned play. The way the fictional playwright, Neil, talks about it – in a manner sympathetic to Bennett’s own feelings on the matter, one supposes – doesn’t sound like anything I’ve ever heard anyone of Levey’s age say about their practice.

But again, this is by-the-by and detail. The wider sweep of the play, its arguments about biography, the characters’ observations (both sets of characters, within and without the “play”) about the way that Art is created is interesting enough, if a little antique. More interesting is the biographical interest it generates around Bennett. Here he is, after all, having achieved National Treasure status, not least with a recent run of autobiographical books to rival Katie Price, making a piece in which two artists essentially articulate their desire not to be autobiographised. And into the bargain, foregrounding *a* playwright – if transparently not himself – and then subtly inviting us to see the comparisons between Bennett and Auden and Britten.

And certainly there’s something in it. The homosexuality is one element – Bennett having lately moved from his brilliant if coy “Perrier or Evian” rebuff to seeming comfortable admitting that he is in love with a man. His characters, thanks partly to Britain’s shameful history of persecution, seem less happy, while there is also an interesting comparison to be made between Bennett’s recent run of older-men-who-like-younger-boys plays and Britten’s criticism of himself for repeatedly indulging the same theme.

There’s also a return to Bennett’s perennial theme about access to the arts. This is certainly the subject of Neil’s Caliban’s Day, which takes its title via a muddled route through Auden’s The Sea and The Mirror, a poem which seeks to upset the tidiness of the Tempest’s rather pat ending, and in doing so creates a hyper-literate Caliban who addresses the audience. “Neil’s” “Caliban” is a rent-boy who has been ordered by W.H. Auden. He doesn’t do much except stand in for the Great Unwashed (ironic, given Auden seems far less given to cleanliness), along with the Beauty of Youth and various other clichés. More affecting is the discussion between stage manager (Frances de la Tour (the programme is in BLOCK CAPITALS – not helpful when trying to work out how many capitals her name should have) who is playing a perkier version of Mrs Lintott from The History Boys) and playwright – the director is absent from this rehearsal (Bennett obviously doesn’t think much of the mediation that a director interposes between writer and actor) – about the National Theatre itself in which Ronald Eyre is said to have suggested that on the unveiling of Denys Lasdun’s building that its three spaces should immediately have been converted into a pool hall, ice-rink and box arena until the perceived elitism of the building had worn off and only then would it be fit for plays. Counter to this suggestion is the argument that the continual run of play after play after play is what has gradually made this curious building fit for purpose. I’m not sure it’s an ironclad case, but it sounds very moving in the moment.

Overall, well, you come out having enjoyed some good jokes and been given an awful lot of things to consider, and experienced some fine, moving moments into the bargain. It’s a big old grab bag. You have to do quite a lot of the work yourself, while formally it seems to be far in advance of its contents’ conclusions. It feels like it would benefit from being staged before an auditorium of sofas, with the audience free to wander in and out and make themselves cups of tea. Then it could go on much longer.

I’d quite like to see the unedited, durational version – same set, same cast, but somewhere comfy like BAC. As it is, it feels like a compromise between someone halfway to believing plays don’t need to be proper and someone who insists that they should at least try to keep up appearances. There should be something that feels quite sophisticated about the approach, but it’s hard to resist the idea that this is simply an attempt on a play that has been sent into the world before its time.
Posted by Andrew Haydon at 16:10