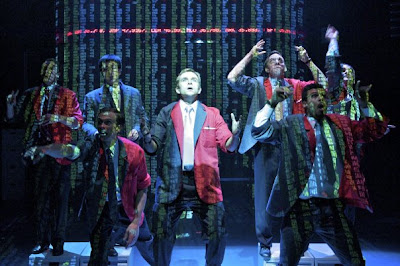 Unless you’ve been living under a rock since the spring, you might already have heard that Enron is very good. Going to see these blockbuster, multi-five-star awarded shows is always a slightly strange experience. You kind of forget beforehand that you still have to watch the play. Even if you’ve read the reviews, because of the cumulative effect, you don’t really know *why* something’s meant to be good, you just get this impression that you’re in for a rollercoaster of perfection. Which isn’t how theatre actually functions. Things that are good are good because you have to watch them carefully and think about them (or at the very least *feel* them) and where they end up being good is inside your head (or heart, or wherever). For all that, Enron is, of course, very good.

What’s fascinating about Enron is its formal qualities. Essentially it’s a musical about capitalism. Except, it’s not actually a musical. It does have a handful of songs and a few non-sung dance sequences, but that’s not why it feels like a musical. That said, the songs that there are are rather good and a few more wouldn’t have hurt - the first, for instance, is a Philip Glass-like number about the stock markets with the stock and prices of the metal markets sung against a projected matrix of ticking, pulsing numbers (see above). What’s interesting about it, though, isn’t the points where the piece clearly *is* a musical – i.e. when the cast are singing or dancing – but the way that this aesthetic informs the wider bulk of the play’s dialogue-based substance.

It’s hard to forget Howard Barker’s description of the musical as the authoritarian art form. And it’s intriguing, in the light of this, to see how the piece positions itself in relation to the ideologies that it presents. By and large, the piece resists taking cheap pot-shots at targets that might be regarded by many of a leftie bent as so many fish in a barrel. Enron CEO Jeffrey Skilling (Sam West) is instead given a coherent, logical and persuasive worldview. It’s one with which, of course, we’re free to disagree, but you get the feeling he wouldn’t care. And moreover, our disapproving wouldn’t get us anywhere. Skilling is just one man who is articulating something far more widely held, believed and, crucially, something of which we are all a part. Even though most of the play is just people talking to each other in variously flashily designed interiors it still *feels* monolithic like a musical. It’s got a kind of steamrolleriness about it. In short, it feels a bit like watching global capitalism itself. It’s not the characters making assertions and explaining how markets work, it’s the knowledge that what they’re talking about is real. It’s like an attempt to make an ideology tangible.

Of course, there’s always inevitably going to be something inexorable about watching a story to which we all know the outcome – like United 93, we know it’s going to crash at the end. In one of the production’s few false moves, the crash of Enron is played out – as in life – uncomfortably close to the destruction of the World Trade Center. Historically this might well be true; visually, it comes perilously close to drawing the unintended parallel that, like Enron, the WTC had it coming. I don’t suppose for a minute this is the intention, but equating the shredded documents of a criminally corrupt company with the ashes that rained on New York is a step too far.

A couple of scenes close to the end of the play – Skilling attending Kenneth Lay’s funeral, Skilling being plainly bonkers in a New York street, feel slightly over done – possible missteps toward the judgemental, which jar with the way the rest of the text operates. But Prebble’s script pulls it back in the final scene in which Skilling, defiant and angry, directly addresses the audience. By making him a scapegoat we are trying to banish something of ourselves. The stock market is a testament to human ingenuity. That, sure, it’s not perfect, but look at the world, look at ourselves, and consider the advantages it has given us. It’s a difficult argument to refute. Here we all are, after all, in a lovely theatre, where we have paid to be, watching the people we’ve paid tell us a story about money.

If the comparison isn’t too much, it is reminiscent of the Jews in Auschwitz who put God on trial, who found him guilty, and then immediately fell to praying. Here we are living within a system which that has collapsed around our ears – Enron now stands as a harbinger of the subsequent far wider collapse – and yet we cannot conceive of anything else.

Enron isn’t a play that preaches resistance or suggests alternatives. On a very basic level it isn’t trying to. It ably and entertainingly tells how a handful of very clever men tried to conjure a lot of money out of thin air and weren’t quite clever enough to be able to do so.

Here, Rupert Goold’s customary directorial flair looks strangely normalised. If he’d taken all the elements on stage here can applied them to, say, Hamlet, certain critics might bridle at the imposition. The production has actors in suits dressed as giant mice; or pretending to be Jurassic Park raptors, which represent the embodiment of complex financial debt restructuring mechanisms; or performing choreographed sequences wielding light sabres to represent Enron’s blitzkrieg on California’s deregulated energy market. Where elsewhere there’d feel like a certain radicalism about men dressed as dinosaurs, in the service of this not-actually-a-musical they feel perfectly safe. Perhaps musicals just allow for more spectacle as default, where in “the classics” it would still feel subversive.

So, what are we to make of Enron? Is it theatre’s admission of defeat? A mea culpa from the Royal Court who, after decades of counter-capitalist rhetoric, still charge money for tickets, pay actors, and cannot move outside the system it sought to criticise? At the same time, isn't it all the more deadly in its critique precisely because of its refusal to accuse? It shows us people being clever, having money, enjoying the money and the material advantages it brings. It also, crucially, locates their desire to look after not themselves, but their families. The flitting presence of Skilling’s infant daughter, slowly counting millions of dollars, is as much a symbol of his humanity as the implacability of the dollar.

As we all know, the show has already sold out its run at the Royal Court and transfers from there to the West End in January (tickets on sale from the Royal Court Box Office now), and no doubt from there to Broadway. I suspect in each of these new locations it will feel ever more contradictory and strange.
Posted by Andrew Haydon at 12:01