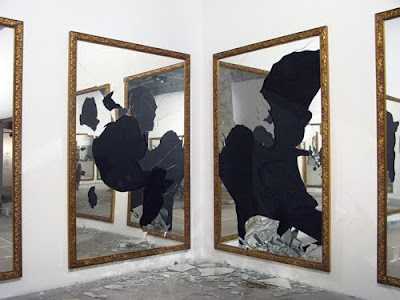 [in the spirit of writing about a scratch performance, this is very much scratch-criticism]

I’ve been thinking about theory a lot, recently. I’ve been reading a few books – Nicholas Ridout’s Stage Fright, Animals and Other Theatrical Problems and Theatre & Ethics, and Joe Kelleher’s Theatre & Politics – that suggest disconcerting and often difficult-to-imagine models of theatrical engagement. The conclusion to Ridout’s ...& Ethics, having made a nonsense of the idea that theatre can meaningfully posit an ethical argument straightforwardly or behave ethically, suggests: “Theatre’s greatest ethical potential may be found precisely at the moment when theatre abandons ethics”.

Kelleher’s ...& Politics concludes: “...The system is thick with interference ... In this image the actors will be waving still, transmitting nothing beyond the act of transmission ... the ‘message’ and its transmission may never have as much to say to us as the renewed image of those performing bodies crossed by language and linked by the distance that separates them, from each other and from ourselves ...”

The brief programme description/introduction for the other night... reads:
“Outside it was getting dark. A Storm is coming. Dogs are howling. People run in the street.
In here no one seemed to have noticed.
People shift awkwardly in their seats, and wonder if they should be doing anything.”

I like the way the two passages seem to complement each other. Kelleher’s analysis tipping into a sort of romantic apocalypse. Both remind me of the voiceover at the start of Dead Flag Blues (YouTubed below).

For all its claims to reflect the influence of David Lynch – this weekend’s theme for BAC’s Scratch Festival – the piece was much closer to Tim Etchells at his most bleakly beautiful. What was also brilliant was how perfectly the work chimed exactly with the works of theory.

The form of the work was as follows:
A girl sits in front of a television set with a piece of paper taped over it covering most of the screen.
The audience were sat down and twenty members were selected to sit in ‘an audience’ on the stage.
[note to scratch: Was it important that they became “an audience” on the stage in front of us? What would the effect be of staging the piece in a space regularly used in traverse? It would still work, IMHO, but it would be different. How central is the idea that the “real” audience of the piece is the one watching from the stage?]

Above this “audience” now facing us – the rest of the audience – was a large screen onto which scrolled white instructions on a black background. Endearingly slightly askew, a white edge round these instructions mirrored the chinks of static visible behind the paper on the TV screen.

The screen tells us the girl is not important. This isn’t about her, it says. It’s about us. And what happened that night. And now we’re going to show “the audience” how it went. “people shifted awkwardly in their seats” it tells us. We do so. “people coughed”. Again, we do. “people checked their phones” and so on.
[note to scratch: this could have gone on longer. It felt that if the instructions had been slower – if this were a fuller piece – then they the signs of discomfort might even come slightly before the instruction – maybe add in, “someone laughed knowingly”]

The instructions get more and more specific, singling out one person to do something – “someone run outside the theatre and came back in to say what the weather was like”; “someone in the back row tried to get up and leave but couldn’t get past their neighbours”; etc.

By this point, the audience was doing quite a good job of co-operating. Someone always stepped up to the plate for each instruction. After a while longer, the instruction comes to leave. We are standing up, filing out, still looking at the screen, still acting together as a unit and still following, and interpreting the instructions.

There’s some other detail I should have threaded in about static-y scratchy white noise occasionally interrupting the building, climactic soundtrack anthem [what was that, Field?]. There are bits of description of apocalyptic stuff on the screen sometimes, as well as the instructions. Many not dissimilar to these from an earlier piece.

There was something oddly exhilarating about the piece. The breathless, apocalyptic romanticism, combined with a childlike sense of playing. And of mucking about in what’s meant to be a serious space. The way it sets up audience as almost unwatched actors. The way that our spectatorship was returned *in kind*. I haven’t got to the relevant chapter in Ridout’s Stage Fright..., about eye contact, but the wider theses seem directly echoed here. This did feel like a piece of political theatre of the sort described/suggested by the Ridout and Kelleher. It seemed to be a piece that suggested in ten minutes much more than could have been asserted in fifty.

Today’s “cover” image is a photo of a Pistoletto installation in Vienna from Tim Etchells’s blog.
Posted by Andrew Haydon at 16:59