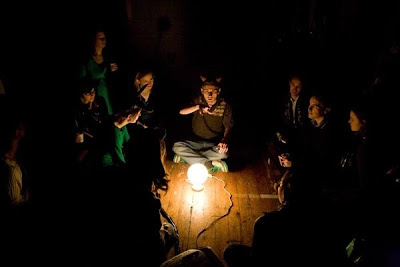 Tinned Fingers are rapidly turning into one of my favourite young/new/emerging companies. Actually, scratch the qualification, they can easily hold their own around far older, more established groups. It’s strange. A lot of what they do really should come off as annoyingly twee and cutesy. Their self-consciously lo-fi aesthetic ought, by rights, to grate like mad. But it doesn’t.

Here’s why: First of all there’s their wry, deadpan wit. They are very, very funny and display absolutely no sign that it’s on purpose, which makes it all the funnier. There is their ability to make a group of people who have come to watch a performance immediately feel completely at home with the company, each other and the space they’re in. Our Fathers’ Ears at various points involves audience members shouting out suggestions, switching table lamps on and off to create the lighting effects and making giant paper boats and flags. I *hate* “audience participation”. This, on the other hand, felt like terrific fun and I’ve got no idea how they managed to create that dynamic.

Then there’s the level of guiding intelligence behind their work. The jokes are all well and good and having a nice time making paper boats might be fun, but it’s the care and attention with which the show is crafted that makes it special. What feels like harmless scenario leading to harmless game suddenly finds the audience confronted with the ethical unpalatability of Darwinism. This is part of the joy of the thing, you spend your time in the space enjoying the stories and diversions, and every so often you catch a little hint of something serious – sometimes playfully undercut with deadpan delivery or so underplayed you’re not even sure it’s there.

There are also the moments of quite brilliant improvised stagecraft. In the penultimate scene the three performers stand on the space’s low stage each caught in the glare of an Ikea desk lamp which demands them to speak. The lamps are controlled entirely at random by members of the audience. People come and go, switching between speakers, sometimes highlighting one, sometimes all three and sometimes switching rapidly between them like some sort of DIY version of Beckett’s Play.

The real game here, though, is a lifeboat debate – which of the performers will we choose to leave behind “for the greater good”. On the day I saw it – and also the following day, according to a friend – from an audience of 24 (the maximum allowed), each of the three performers got eight votes. Somehow, an hour in each other’s company had made everyone decide that we didn’t want to chuck someone overboard; that we liked being friends; that we didn’t want to make any of them feel less popular. That was kind of lovely in itself.

But the piece had to go on. Eventually someone (naming no names) swapped groups. The performer from whose group he’d moved was duly cast out and the rest of us were herded together and given wine to celebrate the continued survival of our species now that the dead weight had been cut away. On paper it sounds slightly simple, but at the end of an hour or so of fun and games, it felt oddly moving, and also like one of the most lightly worn but brilliantly sharp illustrations of how putting idealism into practice can have monstrous results. Suddenly the piece went beyond its nominal inquiries into Darwinism and climate change (there was a fair bit about polar bears on melting ice caps) to a pretty acute reflection of how ideologies fail. The way that a piece so seemingly delicate and fragile can support such weighty ideas is pretty much a perfect illustration of why Tinned Fingers are one of the most interesting companies out there at the moment – a real blend of the playful and the intellectual, and dead funny into the bargain. Here’s hoping for a lot more very soon.
Posted by Andrew Haydon at 19:05