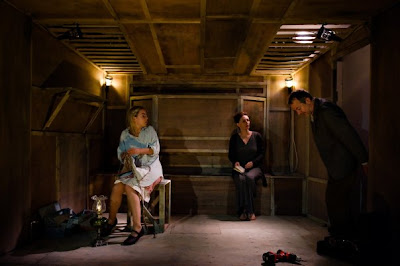 Vanya is the latest in what could flippantly be termed the Gate’s occasional “Half the title, half the play” series – stripped-down, modernised or experimental new versions of classic texts by Ibsen and Chekhov (we look forward to Gho and …nov). In truth, there’s not much of a common thread within this strand beyond the venue and the quirk in titling. Three different directors, three different writers and three wildly different apparent intentions and results.

Sam Holcroft’s Vanya is a stripped-down, minimalist, modernised version of the Chekhov classic taking the four central characters – Vanya, Astrov, Sonya and Yelena – and playing their tragic trajectories stripped down to stark interactions with one other. In her director’s notes, Natalie Abrahami likens their plight to the heads in Beckett’s Play, cyclical and doomed to keep repeating their tragedy every time the play is read or performed.

To this end, designer Tom Scutt has created a neat, revolving, packing crate-like shed of a set, in which Vanya and Sonya are boxed at the beginning and end of the play. Actually, it’s a stage design that owes a lot more to Enda Walsh’s Bedbound than Play, but the (already similar) meaning is unmistakeable. Every time the box – poignantly marked “Fragile” – is opened, the same thing will happen. They begin alone, together; they end alone, together; these are people who have no chance to learn or grow.

Holcroft’s script is a less elegantly structured affair. Stripped of the other characters and the finesse as Chekhov’s four act model, the timescale of the piece becomes slightly blurred. Moreover, some of the transition into colloquial English does mean that characters often blurt rather more bluntly than they do in the original. It initially feels as if there’s less build, less subtlety. Fiona Button’s Sonya sets the teeth on edge for quite a while, while Robert Goodale’s Vanya is so nakedly, appallingly needy that you just want to give him a good kick. Perhaps it’s the effect of removing some of the Russian-ness from the story, but you just want him to pull himself together and to stop being so painfully gauche.

However, somewhere before the half-way mark, the tragic momentum takes hold. As it becomes clear that Simon Wilson’s diffident, indifferent Astrov – turned here into something of an eco-campaigner with his talk of “squandering our resources” and veneration of ant societies – has cast his spell, not only on the awkward Sonya, but however briefly on her beautiful stepmother Yelena (Susie Trayling), the inevitability of all four’s emotional desolation suddenly makes the action horribly, grippingly compelling and Holcroft’s script takes off.

There are some oddities thrown up by the approach that has been taken. On one hand, it feels like we are simply watching some of Uncle Vanya in a modern translation, and as such it is informed by the other Vanyas we have seen. The names haven’t been changed, so we assume they are still in Russia. But a more modern Russia, perhaps, apart from the candles and oil lamps. But then why the modern dress? Perhaps the setting is unimportant. The play has, after all, been stripped of its social comment, although the new, louring environmental dimension is an interesting addition, and one that I can’t help feeling is going to start permeating more and more theatre as concern over forthcoming eco-catastrophe mounts.

There is also the question of overt theatricality – something that this version both foregrounds and retreats from in equal measure. The obvious artifice of the set – the way it almost creates a stage upon a stage – has the effect of heightening our awareness that we are watching Theatre, while at the same time seeming to enclose the actors, the characters, behind what is almost an eighth wall – literally so at the beginning and end. The style of acting – the British-do-classics modern naturalism, basically – doesn’t suggest the performers’ awareness of their being actors, even as the staging emphasises precisely that. They are ‘being’ their characters, it seems. Curiously, though, there are several direct audience address monologues. One, by Yelena toward the end, is explicitly accusatory on the subject of male attitudes to beauty, and appears to be directed straight at the male members of the audience. However, it is the staging rather than the performances that force us to consider the theatricality of the presentation - the curious pretence that the actors are people who don’t know they’re part of a play, even as their boxy wooden world tries to tell them otherwise.

At root, however, this is a Vanya that is interested in the deeply painful human tragedy on display. And, by God, it’s very, very sad indeed. Perhaps more could have been done to draw out quite how painful Yelena and Astrov’s situations are, but the final image of Vanya and Sonya, utterly destroyed, shutting themselves back up in their little crate marked fragile until tomorrow night, and the night after that, and the night after that, is both beautiful and heartbreaking.


production photo by Simon Kane
Posted by Andrew Haydon at 12:23