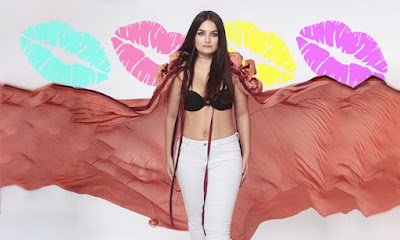 Like Sasquatch, Mercer & Hyde’s The Marriage of Kim K feels like the sort of improbable insanity that the Fringe was designed to accommodate. I mean, who actually felt that what their life was missing was a rom-com mash-up of Kim Kardashian’s 72-day marriage to basketball player Kris Humphries – as told by camp TV series Keeping Up With The Kardashians (and possibly Sam Riviere) – and Wolfgang Amadeus Mozart’s Le Nozze di Figaro?

In the very small Cons corner, if I’m brutally honest, I could have lived without the audience-hand-holding bridging-device-between-two-worlds: a put-upon composer and his new qualified lawyer wife, bickering over what to watch on the television (Keeping Up... or Mozart, natch), even unto near-marital breakdown. That said, it’s this element that also makes the thing feel democratic and accessible (even if most couples aren’t composers and lawyers). And, y’know, most people probably relate more to squabbling couples than to comparative studies of high and low culture and their unexpected intersections. Also, the staging is kinda terrible, but in a likeably shambolic, Fringe-y way.

But, yeah, the Pros side here is huge. The six-strong singing cast – particularly the two opera singers – are a marvel, and the (sadly invisible/hidden) band + string quartet are excellent. There is always something so much more exciting about hearing all the music played and sung live. And then there’s the script/book/lyrics/libretto. In an early witty touch, the couple on the sofa watching Mozart put the subtitles on, and the Mozart singers switch from Italian to English. And this translation (slight adaptation?) of Figaro seems to me to be world-beating, what there is of it (I would happily watch the whole thing at ENO). And then there’s the Kardashian bits. Now, it’ll surprise none of you at all, that I haven’t watched a single minute of Keeping Up With... until I sat down to write this review, but it’s my guess that the lyrics for the musical Kardashian bits are quite plausibly lifted wholesale from the show, maybe it even includes “famous” quotes, combined with the rigours of writing rhyming musical theatre songs. (Do I suspect that Hamilton might be the defining influence here? Probably, but as we also know, I’m not *as* enamoured of (the recorded version of) that musical as everyone else on the planet seems to be – I mean, it’s clever an’ all, but there’s still just a bit too much fondness for musical theatre songs to let me actually love it.)

So, on several levels, I’m maybe exactly the wrong person to be reviewing this, being perhaps one of a handful of people who prefers opera to reality TV. What’s actually rather nice, though, is that while I suspect that the piece’s main concern is trying to de-fang Mozart for scaredy-proles, it also works just as well the other way round, and sells the idea of Keeping Up With The Kardashians as a completely riveting bit of modern tragedy on a par with Euripides or Seneca. So, yeah, (mostly) excellent work all round; although if Mercer and Hyde could now put down the soupy musical theatre stuff from here on in, and concentrate on the witty, musically intelligent side of their arsenal, that’d be perfect.