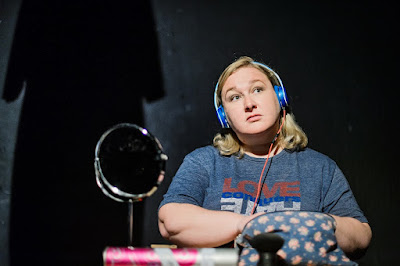 Rebecca Atkinson-Lord’s début solo-show is the only thing I’ve seen at the Fringe so far (or at all, it turned out) that connects Edinburgh to the biggest question being examined at the Manchester International Festival this year (well, by two shows, anyway); the question of “class betrayal”.

Like both Eribon and Stephens (et al.), Atkinson-Lord takes herself as the main example, and extrapolates outwards. A-L, those of us who have ever met her before are surprised to discover, is in fact from the West Midlands. She sings us a neato historical folk song about the bread and butter riots of 1766, and talks to us in her “native” accent. An accent I confess I’d never particularly noticed she had before.

Moving between three clearly demarcated sections of the stage (which probably represented something, but I was too woolly-brained to work out what), she changes clothes, writes on a chalk board, and – most engagingly – delivers a pretty faultless, three-character, headphones-on, verbatim theatre section of a car journey she took with her parents. Through these various sections, she gives a pretty good potted account of English history, her own accent and how she’s basically ditched the one she grew up with in favour of a “posh” one, and, well, the curse of the English class system.

It’s very striking, I think, that of the three shows – Returning to Reims, Fatherland, and The Class Project – it’s the only one that deals with “accent”. Stephens, as we probably know, has pretty much retained some version of his Stockport accent, and accent just doesn’t seem to be a factor with real class connotations in Germany in the same way (there are regional accents, but lacking a centralised point of resentment (i.e. upper-middle-class London), none of them seem particularly privileged above the others?), so if it was a thing in Eribon’s (French) memoir, it certainly didn’t become a major factor in Ostermeier’s German-thought, English-performed production (a factor clearly further complicated by the fact that Nina Hoss as the narrator was a German speaking in English, so her accent was “German” – a totally classless proposition as far as an English audience is concerned; “foreigners” always seeming “a bit posh.” At least, until they’re “immigrants,” right?).

I mean, I probably have *some thoughts* about accents myself, but they’re pretty unformed and imprecise, so I won’t go on about them here. Instead, let’s note that – while not “perfect” (whatever “perfect” means) – The Class Project is an interesting, intelligent, engaging hour, picking over and reopening what is pretty much an evergreen subject for the English, but a subject that, nevertheless, No One Else At All seemed to be talking about this Fringe. (That I saw.) (With the exception of All We Ever Wanted...).
Posted by Andrew Haydon at 16:50