All We Ever Wanted Was Everything – Paines Plough Roundabout, Edinburgh 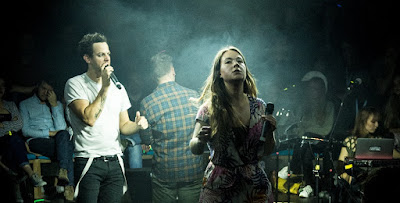 All We Ever Wanted... is an absolute belter of a show. Big story, big noise, big heart. I bloody loved it. Sure, there are probably a few bits and pieces you could quibble about, but basically it’s brilliant.

It’s by (EU City of Culture 2017) Hull’s (Leave 66%) Middle Child Theatre, who are pretty much still the only company in the UK who make “gig-theatre” – that is to say, the story here (written by Luke Barnes) is told through a mixture of narration, short dialogues scenes (directed by Paul Smith), and punky-poppy songs (music by James Frewer). Songs which, in this fast trot from 1987 to 2017, err toward light-touch period pastiches. There are also some excellent period-piece observations (and the odd old Nokia).

[Quite spoilery for a while, now. Maybe just buy a ticket and read later...]

The story itself starts in Hull in 1987, when Kimberley (Emma Bright) and Brian (Joshua Meredith) are in hospital waiting for the births of their respective children Chris (James Stanyer) and Leah (Bryony Davies). Ten years almost instantaneously pass, through the magic of M.C. Marc Graham’s narration, and Kimberley and Brian meet in a [bookshop?] over the last copy of the first Harry Potter novel. Tony Blair has been swept to power, Britpop [and Brit-Art] and “Cool Britannia” [and the plays of Mark Ravenhill and Sarah Kane in Germany] are Making Britain Great Again, even if Kimberley’s and Brian’s relationships have gone ass up. They arrange a play-date for their children. Chris and Leah get on like a house on fire and decide they’ll get married. Their parents, more aware of their class differences, don’t quite manage the same thing. Fast forward another ten years to War on Terror 2007 and middle-class Chris is at Manchester Uni hating every minute of it, while working-class Leah seems to be having a lovely time working in Build-A-Bear, but a chance encounter with her old school rival Holly (Alice Beaumont) turns all that around when she decides she wants to make a lot more money...

There’s *a lot* of welcome and unexpected complexity in this class-conscious narrative. From 1987 to the start of the 2007 segment, you’re struck by bleak thoughts on Britain’s sheer lack of social mobility. Then, Barnes pretty much turns those sympathies on their head. Firstly, by reminding us that there’s nothing *wrong* with being working class; second, by suggesting that being middle-class (for this particular character) isn’t necessarily a whole lot of fun; and then, thirdly, by having Leah go on to make quite a lot of money, we’re reminded that class and wealth aren’t inextricably linked (and, fourthly, that it’s kinda stupid putting a bunch of energy into hating the middle-classes at the same time as encouraging social mobility anyway...). It’s fascinating. Essentially, Barnes is both a subtle and a completely unsubtle moralist At The Same Time. And, lest all this sound a bit serious, it’s not even about “morality” (class-based or otherwise). Those ideas are in there to have a think about, if you like, but let’s not forget this is basically a banging episode of Doctor Who with songs. (“Doctor Who? What?” Oh, I forgot to tell you about the singing asteroid that’s about to destroy the earth, BY CHOICE... And the fact that Paines Plough’s Roundabout still looks like the Tardis...)

So, yes. Total fun, and enough *stuff* in it to be worth thinking about too. And moving! It’s really moving! And there’s a bit at the end where Marc Graham gets to deliver a speech that might as well be David Tennant or Christopher Eccleston’s Doctors at their very best. So, yeah. Go and see this. It might be not perfect, but it’s a bloody good argument against perfection.


[Absolutely no reference at all to this, though...