The Brothers Are But Believers – Summerhall, Edinburgh 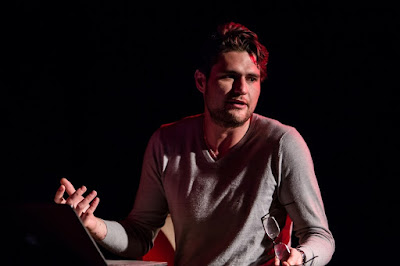 Have you read Angela Nagle’s brilliant Kill All Normies? Javaad Alipoor’s The Brothers... is almost the hi-tech, multi-media, stage show of the book. Ok, it’s not. Instead of considering the online culture wars from a Left/Right perspective, it instead looks at the “East”/West version. Or rather, the version of violent online “masculinity”that manifests as 4chan (even unto Trump) in the West and as online Jihadism even unto ISIS-membership – kind of also “in the West,” but on into the Middle East. (These highly political “geographical” distinctions are essentially rendered absurd by the piece’s relentless good sense.)

It’s a pretty simple structure – part performance lecture, and part triple-stranded narrative monologue about three very different blokes, who all watch the same video of a girl being blown up by a bomb in Syria – interspersed with some whizzy projections and live texting in a What’sApp group. This last innovation, believe it or not, I’ve never seen used before, and it’s strikingly effective here. Indeed, there’s a bit where Alipoor – echoing Oliver Frljić’s Klątwa – points out that he could just text us all links to what he’s talking about, but in the theatrical context 4chan would probably contravene the Obscene Publications Act, and sending links to ISIS recruitment sites would fall foul of the Prevention of Terrorism Act. But even without, the way that the entire room/audience is suddenly networked, like a little encrypted cell all of our very own, reflects the content, and “the world of the play” beautifully. “The world of the play” being *precisely the world,* after all.

Alipoor writes rather brilliantly, and performs with a northern swagger that I reckon could even make the phone book sound pretty cool. [Incidentally, when are we going to get a new stock phrase for “makes the phone book sound exciting”? Young people won’t even believe that they even existed. I mean, you know this “doxing” thing that the show also talks about? British Telecom used to publish a book containing everyone’s name, address and phone number as a simple courtesy, FFS.] Alipoor is pretty much the ideal poster-boy for solid, sensible, old-left, atheist-Islam; not to mention even making “theatre” seem a whole lot less stale than it may often be perceived as. The form of the thing feels urgent and mobile, and the set (Ben Pacey) looks a bit like something out of Spooks (indeed, even the stories bear passing similarities (I intend this as a compliment; I like Spooks, even if it does have *significant problems*)).

If there’s a gripe, it’s maybe that (like Kill All Normies), it’s so good and interesting that you could happily wish it was two or three times as long. And it’s basically an overview of an analysis that’s very easy to agree with. I’d have been interested if ...Believers had also added a consideration of what the various factions of the disastrous “left” are up to; sitting in their own bedrooms being baited by 14-year-old boys who have learned how to wind them up, while drawing up ever more elaborate LARP-style rules about what people can and can’t say, admiring the thinness of each others’ skin, and codifying “left” politics into the most exclusive jargon possible.

Nonetheless, for all that Billington-style backseat dramaturgy, this is a a thrilling, urgent, blackly funny piece of work that at least makes one of the apparently inexorable impending global conflagrations seem comprehensible, and even maybe avoidable.