Give Me Your Love – Summerhall, Edinburgh 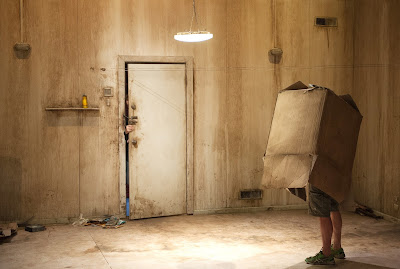 When we were about 17, my mate Alan and I used to write ridiculous (and terrible) “plays.” What strikes me as interesting now, is that there was basically Pinter, Beckett, and Orton for inspiration and precedent. That’s all the “contemporary theatre” there was in 1993 in Birmingham. All there was, it seemed, was grimy men in grimy rooms, indulging in faintly amusing, mostly disconcerting, entirely inconsequential dialogue.

You can see where this is going, right?

What’s strange and disconcerting about Give Me Your Love – devised into a buyable playscript by Ridiculusmus – is that all the material around it concentrates on the company’s research into presenting mental health issues on stage. Strange and disconcerting, because it is more or less entirely impossible to discern any difference between this piece, and the plays that Alan and I wrote 25 years ago.

What happens in GMYL is that __ (_ _), a war veteran with PTSD, stands in a room yelling at his front door, behind which various visitors stand (alll voiced by _ _). From inside a cardboard box. _ _ doesn’t get out of the cardboard box until the curtain call. _ _ (in any of his many voice guises) never enters the room.

But also, indistinguishable from a comic play by two adolescent boys who just found mad people really funny. So, my point is this: if it’s impossible to tell the difference between a play that proudly wears its research into mental health on its sleeve, and one which has done exactly no research at all, isn’t it a bit of a problem?

It seems harsh to suggest it, but without a hand-picked audience who know the company, know how to make all the right noises, and have done all the background reading etc., this could easily be construed as somewhere between nonsense and deeply offensive/problematic, etc. “But it’s not! It’s the product of research!” defenders will argue. Sure. Fine. But theatre itself isn’t a good format in which to present the findings of research, is it? I mean, a lecture theatre is, but this wasn’t a lecture, was it? It was a comic and surreal (non-)narrative drama. It was pretty much 4th Wall naturalism, in fact. Even the walls of the set were realistically begrimed. There was all sorts of attention to realist details. And to what end? To display comic Welsh accents (I guess at some point audiences outside of Wales will stop finding the Welsh accent funny, and start finding their laughter racist, but not today, apparently), and a bloke stood in a box for an hour. Which also made the audience laugh.

I get that laughter *can* enhance the poignancy and humanity of a person’s suffering. We can feel the cruelty of a situation all the more keenly through the absurdity...  Except here we really don’t. (Or at least, it really, really didn’t work for me.) It’s a shame, because you can completely see what’s been/being aimed at, but I reckon it’s occasionally worth noting when a thing really hasn’t come off. And this, for me, really didn’t.
Posted by Andrew Haydon at 12:35