They Drink It In The Congo – Almeida, London 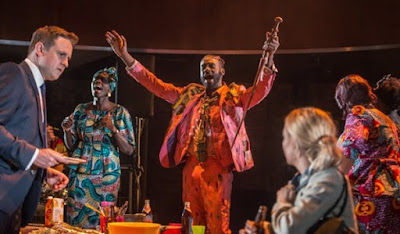 The basic point of Adam Brace’s new play, They Drink It In The Congo, is that we’re essentially the Nazis. Well, no. We’re not even that impressive any more. We’re the Nyilaskeresztes Párt or the Ustaše or something. A nasty-but-nothingy ally of the great imperial power.

When Rome obliterated Carthage and essentially took over its trading empire, rather than allowing countries to exist self-sufficiently, they turned the various countries of their empire over to growing a particular crop in order to supply it to the whole empire. Of course, this also had the neat additional effect of making the conquered countries dependent on the empire. Imperial Britain’s adoration of Imperial Rome can of course be observed in the almost embarrassingly fawning architectural tributes scattered throughout central London. Of course, Fascism comes from Ancient Rome-worship too. But that’s a very “European” lens; the Kindom of Kongo, prior to the Portuguese invasion, was also a slave-based Empire covering a vast amount of central and Western Africa, and indeed the first slaves traded with the Portuguese were conquered enemies of its king...

But, yeah; to watch They Drink It In The Congo is to watch that play that reminds you, forceibly, unequivocally, that you are the bad guys. Sure, you’re probably not The Very Bad Guys. You’re a real humane person who cares, and all that. But, nonetheless, you pretty much don’t care. Or can’t care. Or don’t know how to begin to go about caring effectively. And what would your caring achieve anyway, *even if it were to be effective*? And because of where you’re based, even if you could bring yourself to care, your care is patronising, toxic and ultimately harmful.

Sure, there are things that are wrong with TDIITC as a play* – it’s at least a bit too long, maybe a bit too interested in minor points of procedure in meetings, and is at least two plays fighting with each other in a sack – although I’m not sure I’d want it ironed out much more than it has been. It’s also a very Proper Play. It’s got a subject and discussion of that subject, and a lot of information about the subject. It’s a pretty good one of those, though, for all its structural inequities and inelegances. There are also some very clever touches to the structure too – perhaps the best is tying the structure of the play to Jon Bausor’s set and the whole shape of the room and the evening – a vast hole at the centre of the stage that opens up for the kind of originating event for the central character Stef’s whole journey. Shown as flashback, we see a Congolais family suddenly invaded and attacked by a rebel militia (or maybe government-backed troops), and then our central, problematically-white heroine almost stumbling across the scene while she’s attached to an international medical team. It’s perfectly, horribly staged and acted and Fiona Button (whose performance as I found infinitely more convincing and compellingly watchable than either Peake or Piper this week) does shock and trauma and panic absolutely “right” (She also does the rest of the play with just the right energy, timing, and matter-of-fact brilliance too, but no one seems to car about those things any more).

What’s kind of great about the play, though, is that the text is at least as clever as any “yeah but...” criticism that anyone can try to throw at it. It might not be *the* best play written this year, but it’s a strong contender for the most astute and self-aware. *Of course* it’s a problem that it’s a play about white people feeling guilty about the Congo (or “Africa” generally, if they’re even less aware), of course it’s problematic that it’s written by a white man and directed by another white man. Of course it’s a problem that it’s on at the Almeida in London’s fancy Islington (I swear it gets fancier every time I go. This time there was a “sugar-free cake shop,” of all things). I think both play and production play with these problems-as-tropes. So much so, that making the actual objections would seem ridiculous. We are where we are. It is what it is. History and current affairs are what they are, and at the end of the day, we are still the Nazis or the Romans, sitting in our comfy theatre, watching a play that isn’t even trying to change anything, because, realistically, none of us care enough for anything to change. We’re shown a simulation of the violence that is either a direct or indirect result of our complete failure to care. We’re told enough statistics to allow us – if we try – to imagine just how often that scene plays out on a daily basis, and we basically sit there, and harden our hearts, and accept that that’s the way the world is. And accept that even if we’re not powerless to change it, we’re not really sure how we would, or whether we’d even be able to change it for the better.

We’re shown some London-based, Congolais-diaspora terrorists, with excellent rhetoric, Four Lions-level ineptitude, and an act of violence that is squalid, selfish and ultimately irrelevant to their struggle. Even their idealism is held up as hollow. But, moreover, futile, as the forces governing even a festival of #CongoVoices are nothing to do with their will, and everything to do with NGO cashflow and beneficence. And the NGOs are being run by British people who “have their careers to think about” (Crucially: “British people” not “white people” – Brace would probably acknowledge that racism does play a part in the methodology of colonialism, but ultimately the problems of the Congo are national/geographic/geological, while the ranks of British/international politics are (obviously) multicultural, and that “black” and “white” are pretty petty distinctions when someone of Ugandan-heritage can look down on someone Congolais and vice versa).

As I say, theatrically it’s a bit of a mish-mash. There are pointers to liveness and sur-realism – the heroine is followed about by the Banquo-like, Caesar-like bloodied ghost of a man she saw brutally attacked in DRC; who, in a pointed bit of anthropomorphism, also plays her increasingly erratic, coltan-reliant mobile phone – but also to something like the naturalism of David Hare and the manic farces of Richard Bean (suggested as the traditional leading exponents of their respective genres). The performances are excellent. Richard Goulding is still one of the most likeable actors on the British stage, with perfect comic timing. Richie Campbell is charismatic and strong as Luis, the leader of Les Combattants des Londres. One could wish (again), that Longhurst had put his Carmen Disruption hat on, rather than his pragmatic and effective hat, but then, if you’ve got a pragmatic and effective hat, why wouldn’t you, perhaps? It’s only me that ever complains anyway.

Ordinarily, I wouldn’t resort invidious hierarchies of misery, but it has been striking to me that several days after I brought up Yerma on Facebook people were still arguing about it. No one argues about They Drink It In The Congo. No one I know who has seen Congo is even dedicating any time to talking angrily about it. If people think there’s a conspiracy of silence around women’s reproductive issues they should try getting people interested in complaining bitterly about the Congo. Ultimately, that is the piece’s genius, I think. To sit what few English people (any race) who can even be bothered to pay for a ticket to see it down and point out to them that this is where 99% of them are at with their ethics – essentially fine with unimaginable suffering; hardened to the plight of pretty much anyone except themselves or someone with the same problems as themselves or a close friend. Of course, the counter-weight to this problem, is that “white people” (or just people living in UK/USA generally) *can’t* solve the problem. Neither by withdrawal or by greater involvement. The play doesn’t suggest solutions – partly because it’s a play, of course, but also because there aren’t any. Withdrawal seems like a start, but where’s even the lobby for that? Thanks to 500-odd years of meddling, the region has essentially fallen apart (although, obviously, the autocratic, slave-based imperial state it was “discovered” in would probably perturb people nowasays too, just as feudal Europe would).  It is an unanswerable question.

So, yeah. The Congo is an appalling mess, and we’re all very sad about it. In the abstract.

Now, on to something else...