First: unlike Matt Trueman (whose excellent, five-star review of this Deep Blue Sea, I wholly recommend), I’d not seen (or even read) Deep Blue Sea before. I know, I know, Dan Rebellato’s vigorous rehabilitation of Rattigan in 1956 And All That is compelling, and I was completely seduced by Thea Sharrock’s After The Dance, but I’d somehow managed to be out of the country, in the wrong city, too young, or just too wisely disinclined, to see any earlier productions (“disinclined” on the grounds that back in the day, things were awfully chocolate boxy for a while, ftr).

Second: I did watch this from the comfort of HOME, in their #1 cinema as an NT Live broadcast. I can imagine all sorts of things about how this differs from seeing it live in the Lyttleton. It’s not my first NT Live show, but it was the first which forced me to experience the whole at a kind of Brechtian remove. One could examine all the elements in this production, and even understand that there was A Lot of Emotion going on, but one never felt caught up in it. It seemed – in this context – that Deep Blue Sea is an incredibly depressing and frustrating play, but never one where you’re in danger of caring. Instead, you (I, at any rate) end up sitting back and feeling rather judgementally toward its principal characters: Hester Collyer (Helen McCrory) Freddie Page (Tom Burke) and Sir William Collyer (Peter Sullivan). I’m pretty sure this isn’t the intention of either play or production. They hardly hold up as any kind of Lehr-Stücke – after all, what can anyone really take from this wretched situation?

[Edit: indeed, looking at the NT production photos after writing this, I discover that the camera had tightened to frame on Tom Scutt’s set to exclude the bits of stage you can see poking round the sides in the theatre. Compare the top photo – cropped to the cinema version – with the bottom photo (theatre version).]

The play opens, as you probably know, with Hester passed out in front of a gas fire (or oven?) having botched a suicide attempt (the gas meter ran out). Over the course of the first scene, as her solicitous neighbours and landlady fuss around her, we gradually learn that she’s a not-quite-divorced, well-to-do type, who left her husband – now a high court judge – for an apparently feckless former-RAF test pilot. They now drink too much, don’t have enough money, and he apparently doesn’t love her as much as she thinks he should, which is why she’s just tried to kill herself. Neither did her last husband, apparently, which is why she left him.

I watched with the vague knowledge that this is Rattigan’s “most personal play” (possibly because the NT Live filler sections told me so), but not who was a cipher for whom. (According to Charles Spencer in a review of an earlier production: “The Deep Blue Sea was inspired by the suicide of a former male lover [of Rattigan’s].”) Without knowing who’s the stand-in for Rattigan, the play seems to pull in several directions at once. On one level, it feels like a rather juvenile celebration of being so “passionate” that you try to do yourself in at the slightest disappointment – a searing insight into depression it is not (although it might be quite a good forensic examination of the crap the depressed mind tells itself). On another level, it also feels like quite an ugly and self-pitying swipe at Hester/Rattigan’s dead ex. It’s not clear whether Rattigan fancies himself as a the straight-talking, but still besotted judge, or the dashing – but similarly suicidal – Freddie. No one comes out of it well. Indees, it feels more like one of Chekhov’s “comedies” (“It’s funny because they’re ALL miserable, Konstantin!”), than a near-miss tragedy.

Third: my third problem is a really stupid one. I got totally distracted by the accents. The cast were definitely “doing accents” of some sort, but they didn’t feel period-accurate (to me, the accent expert. Pfft). Indeed, McCrory added at least one question-inflection to a statement, in that way that modern people just do? I don’t think I’ve suddenly started believing that every period piece be played as a museum-accurate rendition of itself, but here it feel like you can hear a kind of ghostly Celia Johnson and Trevor Howard between all the cracks. In every line where someone doesn’t express themselves fully, or *does* express themselves fully, but in such an understatement that it could almost go undetected, it feels like our modern accents just fail. I mean, I think I even quite liked what the cast were doing, it still just felt weirdly off-kilter (with the exception of Nick Fletcher whose period German accent sounded pretty spot-on). Maybe because of close-ups and radio mics, as much as anything?

This problem of distraction (and I’m sure it is because I was watching at a cinema that I had all this space to worry about such things), then carried through into a whole load of other areas. I couldn’t work out what we could be meant to do with a play whose ostensible problems seemed to be so entirely period-specific (WWII, “Society,” “Reputation,” etc.). Tom Scutt’s mildly impressionistic set (rendered in deep blue-y-greens so we feel indeed like we’re at the bottom of the sea, and with gorgeous semi-transparent walls, allowing for beautiful inter-scene movement sequences, á la Alles Weitere..., and Written on Skin, for e.g.), as well as being expressive, is also incredibly, minutely period-detailed. But, at the same time, *we* – the audience – *aren’t* in the period. There’s a line at one point where Kurt Miller, the German former-doctor, says that he hasn’t spoken German since he left in 1938, “except for a year on the Isle of Man.” This gets a laugh, because, with no context at all in the audience’s minds, it’s quite a funny non-sequitur of a claim. Of course, he’s most likely referring to Britain’s shameful practice of internment camps for “enemy aliens” – essentially, re-imprisoning all the German Jews who had fled Nazi Germany just before the outbreak of the war. But, no. Now that’s funny because we have no cultural memory. Still, to write in a German (Jewish?) character into a play about someone gassing themselves, only seven years after British soldiers liberated Belsen, well, one *could* say that takes a pretty special sort of insensitivity. I dunno. Maybe that’s an over-read too far, but it seemed possible from the way that DBS seemed (to me, in the cinema), most like a play of massive self-absorption, to the point of impenetrability.

But, this is all monstrously unfair. Actually Rattigan is (mostly) interesting and even-handed (if snobbily arch at the expense of the lower-class characters). And I guess we do have a sort of interest in Hester not doing herself in again, even if experienced second-hand through the magnanimity of Dr Miller (i.e. I think we don’t want her to die mostly because it would be upsetting for him).

So, yes; a really hard watch in many different ways. Punishing, gruelling, accurate-seeming replicas of severe emotional distress from Britain’s last austerity period, with undiagnosed PTSD and depression sitting at the root of most of the characters’ emotional problems, unbeknownst to their creator, whose insight into the human condition feels somewhat chilly and vain on this showing.

There is a brilliant, brilliant meta-theatrical casting gag by having Nick Fletcher as Dr Miller, of whom Hester says (something like, I don’t have the script handy): “No. He looks too much like a blackmailer to actually be one...” After Fletcher’s turn as the blackmailer, Krogstad, in Cracknell’s A Doll’s House. 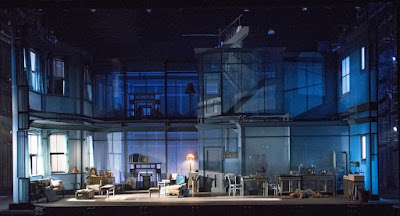 Back To School after Edinburgh is always a bit of a weird wrench. After a month of What Could Be the Glorious Present (or is at least The Hopeful Future) of Theatre, it’s always a bit odd being pulled back into the reality of what actually is The Present of Theatre, and having to adjust to how weird it looks by comparison.

To be fair, being in a cinema probably doesn’t/didn’t help...


ii. What a weird, weird thing Deep Blue Sea is. I have literally no idea what it was for. A 1950s public information film about how it might be nice if we all communicated better with each other, and if society wasn’t so dashed rotten for gals?. Lord knows. The Lord might also have a better idea why it was being done now, and being done in this way. Being NT Live, we had Kirsty Young introducing/explaining the whole thing to us, albeit in platitudes so flimsy and meaningless that not a single thing she said made any sense at all. It was very effusive, though. What we were watching was definitely “WONDERFUL,” just not for reasons that Young saw fit to articulate.

[And, before the show proper started, we were also shown The London Audience; presumably so that we in the regions could gaze upon them in their finery, and wonder how they can both afford to live in the Capital *AND* buy tickets to the theatre. The couple having a surreptitious snog were quite funny, though; they got an “Aw” up here in the grim, heartless North.]

[[No. I *really* don’t think the stuff *around* NT Live does NT Live any good at all. But then, it doesn’t do it enough harm to make them stop. I will tell you all, though, that that trailer for the Ivo Van Hove/Patrick Marber/Ruth Wilson Hedda Gabler made EVERYONE IN MANCHESTER giggle with its sheer, unadulterated, perfume-adverty uselessness. Which is a shame, because it might actually be ok when it turns up. As long as Marber doesn’t fuck the script up too badly.]]