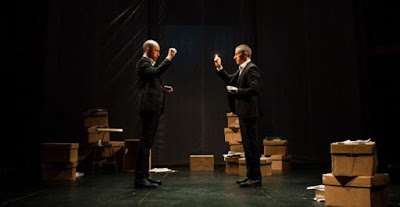 The primary strength of Maria Aberg’s new production of Doctor Faustus is its quicksilver liveness and lightness-of-touch. At the start, while the house lights are still up and the Barbican’s funny auto-close auditorium doors are still open, the actors Sandy Grierson and Oliver Ryan enter and each pick up a box of matches. Simultaneously, each strikes a match and lets it burn. The performer whose match goes out first will play Faustus tonight, and the one whose lasts longer is Mephistopheles.

Unfairly – as I haven’t seen nearly as much of Ryan’s work – I was rather hoping it would be Grierson as Faustus – normally one of the most thankless parts in Eng.Lit; if anyone could redeem it... – and so it turned out to be.

Ryan leaves the stage and Grierson is immediately addressing us as the bad Doktor from his Wittenberg study, bored of his books, bored of divinity, and driven to distraction by the boredom. He is, as Grierson is, so casual and light in his delivery, and so fluent with *the text*, that Marlowe’s interminable verbiage is made genuinely conversational, comic, and interesting enough to attend to. It has also been *massively cut*. Having seen near-full-text versions, my gratitude knows no bounds.

As Grierson’s rationale-intro ends, he begins to draw a vast pentagram on the stage floor. As Holger Syme notes in his (brilliant) review, it’s almost properly chilling. Like, even as rational 21st century subjects, we can see how superstitious types might worry. Like, you at least think about just how enduring these foundation myths of our forebears were. Like, what if there is something nasty in the woods after all ?

All this would be infinitely better achieved if Orlando Gough’s music were different. Now, he’s written a perfectly intelligent and reasonable description of the thinking behind his new music for the play in the programme, and all I can do is say that, for me, there is a massive gulf between that rationale and the reality; further noting that the music (largely) wasn’t what I’d have done (not that I can do music, but you know what I mean). There are a few bits where it works well enough, or where you just don’t notice it. But too many bits where you really do notice it and it’s (to my ears) not right* at all. (The incantation is ok, but that’s because basically it’s The Stooges’ ‘We Will Fall’, which is good...). Nevertheless, on Naomi Dawson’s Secret Theatre homage set (A Streetcar Named Woyzeck?) (actually, it much more like Teatrul Béznă’s CRIME, but anyway...), with the lights down low, and fires burning in cardboard boxes, it’s a great moment.

Oliver Ryan’s Mephistopheles when he turns up – unshowily sidling in through a tear in the plastic sheeting wall (wearing Secret-Theatre-Blanche’s white suit jacket – I really did think Hyemi Shin had done a greatest hits design here) – turns out to be a perfect match for Faustus. I particularly loved the strange voice he was using, hints of David Lynch’s Small Man From Another Place in Twin Peaks, with maybe a hint of a European accent that wanders from the proto-Yugoslavia right up to where the Grand Duchy of Lithuania had been and back again (my favourite description of the Lithuanian language remains my Czech friend Martin Bernatek’s assertion that it sounds like devils talking backwards). Despite not having a shirt on (and as such, being played by a human actor who had to have his tummy sucked in the whole time), this is a subtle and straightforward Mephistophles. His brilliant, theist lines about hell being the state of having looked on God’s face and fallen from grace remain, and seem to constitute the production’s theology.

Meanwhile, Faustus’s contempt for theology remains weirdly conflicted (I still don’t think I’ve seen a production of Faustus that manages to make the slightest sense out of what Marlowe was hoping to achieve with it. People seem content to struggle with just trying to make any theatrical/dramaturgical sense out of what he wrote. Which is struggle enough, definitely, but I am curious...). I guess the argument here is that for someone who claims to have disavowed religion (by which the play means Christianity), both Faustus and his anti-Christ companion are almost pathologically obsessed by it. Of course, while Lucifer cannot bear mention of Christ, She (Eleanor Wyld) is also essentially proof of His existence. Faustus’s gamble with the future is not that God doesn’t exist, so much as that Hell can’t be all that bad really. Whether or not he is correct sadly lies outwith the bounds of both play and production.

It is striking, though, that Faustus’s adventures – certainly those that remain in this production’s edited text – are largely theist. He is “entertained” by Mephistopheles’s conjuring of the Seven Deadly Sins (and he’s probably the only one in the theatre, but never mind – that bit is all a bit sub-6th-form-Brecht and (as always, because script) goes nowhere at all). Indeed, if there is a major problem of Marlowe’s Doctor Faustus that the production still doesn’t solve, it’s the sheer episodic, consequence-free, so-bloody-what-ness of the thing. Not for the first time, I did think it might be time to relinquish our weird nationalistic obsession with the Marlowe and maybe do the Goethe instead, which (unusually for German theatre :-) ) has much more by way of *a plot* (things at stake, conflict, female characters, etc.). Similarly, Faustus goes off and murders the Pope. Because he can. And because he can defy God. And, yes, the sheer so-what-ness of everything he’s doing does create a sort of narrative of listless boredom crossed with militant anti-theism – like, if everything is possible, where’s the actual fun in doing it? But for modern drama I don’t think even this lovely production gives us enough time to really think about anything or explore its meaning.

The one massive, massive exception to this is the scene where Faustus meets “Helen of Troy” (Jade Croot). In this scene, Helen looks all of about twelve years old (which makes a lot of sense when we remember that she was a Bronze age political bride. I mean, if Richard II could marry a six-year-old..., or Henry VII’s mother was all of 13-years-old when she gave birth to him...). Still, to our modern eyes, it’s deeply, deeply uncomfortable, and is played as if there’s a definite sexual tension on Faustus’s part, it seemed to me – a sense of, well, fuck it, she is the world’s most beautiful “woman”, and I’ve come this far, and murdered the Pope, so... Grierson manages to play all this with an additional sense of self-disgust and wariness, which is countered by some brilliant choreography in which it is Croot’s Helen who puts his hands on her; in an embrace, around her neck, etc. In part, it feels like a perfect feminist staging solution to the question of how to stage violence against women without resorting to dumb mimesis. It also recalls the gorgeous, pained, evocative choreography of Bausch’s Café Müller (but, crucially, without being derivative AT ALL). Most of all, it makes us ask what the scene means. Is Helen Mephistopheles? (We know that she can’t be *actual Helen* because Faustus has already explained that’s impossible, and yet the effect for her is different than it is for previous characters from antiquity that he’s conjured.) Is Helen even really there, or is the thing we see on stage a life-size Fight Club style embodiment of Faustus’s tormented soul, asking itself what he’s capable of now? In a way, a definitive answer doesn’t matter. These few minutes of stage-time more than excused all the bits I wasn’t as keen on, even while making one wish that everything had been handled with this sinister, stark strangeness.

But, yes. Especially given the RSC’s production of Revolt... the contrast here couldn’t be more welcome, and after a somewhat wretched first week back in theatres after Edinburgh (mostly), this at least gives us hope that mainstream British theatre hasn’t completely sunk back into death after a brief burst of life.


*“right” is obviously bullshit. You know what I mean, though.
Posted by Andrew Haydon at 15:57