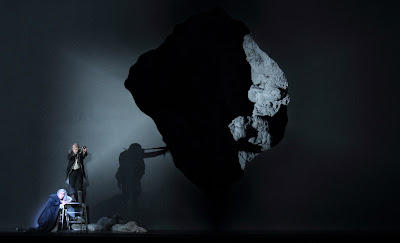 Daniel Kramer’s new production of Wagner’s Tristan and Isolde – his first production for ENO since being named its new artistic director – is not good. It’s not terrible. It’s not a hilariously, godawfully bad staging. But it’s really not good either. The sort of not-goodness it is is the choppy sort. The Orchestra, conducted by Edward Garner, is outstanding. Really beautiful. The lushness and lyricism of the music retains a kind of crisp exterior, rather than collapsing into the always-possible syrupy mess. And, actually, Tristan, sung by Stuart Skelton is very fine. So, if the music is – on the whole – pretty damn good, what’s the problem?

It seems pretty safe to say the main problem can be summarised in two words: Anish Kapoor. This production has been designed by the famous artist, who, sadly, designs sets like a famous artist and not like a talented stage designer. (A fact of which that anyone who saw Akram Khan’s in-i at the NT in 2008 was already aware.) Sculptural shapes are plonked onto the stage and everything else has to just deal with them. As an audience member, one does gamely does one’s best to try to think about what Kapoor might mean with these shapes...

The “set”, or rather, the structure built for Act 1 is intriguing at least. The stage is divided up by massive triangular buttresses sweeping out from an unseen central core. It’s silly, sure, and it has zip to do with the opera, the action, what’s actually happening, or where, or to whom. But that’s all fine. That needn’t be a bar to anything. The problem (it feels to me) is that this isn’t just abstraction, it’s the imposition of a schema entirely unrelated to where it’s going to turn up – this could be a design for *literally anything* – and a schema without much concept of how bodies in space work. Or of how the stage relates to the auditorium. Or how sound works in an opera house...

Then there are the costumes (Christina Cunningham – who, judging by the eminently sane rest-of-her-CV, was ‘only following orders’ here). These are a whole new world of pain and confusion. Cornish knight Tristan is here rendered as a cartoon samurai from the 80s, inexplicably crossed with a teletubbie (he really does seem to have a little shiny screen in his tummy!). The Irish princess Isolde, looks like maybe a refugee from the Mikado, but one who’s been somehow entrapped in a scratch performance of Marie Antoinette. To this end, during Act 1 she straps on two of those crinoline things to support a giant bustle-y skirt jutting out miles on either side of her. So much so, that it looks like she’s riding a little hippo draped in a spangly cloth side-saddle by the time she’s finished. Their servants appear to have also been sipping Les Kool-Aid Dangereuses, but during a singalonga performance of The Rocky Horror Picture Show. None of this *need* be a problem, but it all sits there, in front of the silly set, looking absurd and communicating absolutely nothing about itself. Still, if you ever wanted to know what a watered down version of Robert Wilson’s Rocky Horror Show set before the French Revolution would be like, it’s pretty much this.

In act two/three the set changes, to a MASSIVE revolve-able globe. For Act 2, it’s hollowed side hosts the lovers’ meeting. For Act 3, the globe’s reverse, rounded side lours over their discovery – leaving approximately one metre of stage at the front to perform. Which can be a cool effect, but here looked strained and uncomfortable.

Having had A BIG TRIANGLE for Act 1 and then A BIG CIRCLE for Acts 2&3, I made a bet with myself that Act 4 would have A BIG SQUARE. And I was basically right. There’s a large flat screen – also pushing all the action into a corridor along the front of the stage. A video projection provides most of the white light thrown onto the wall – a wall with a massive Freudian fissure in its centre. Tristan spills a lot of pixelated video-effect blood up and across the walls. Kapoor’s analyst would doubtless have a field day...

But I should stop being sniffy. Act 4 is actually quite interesting, design-wise. The idea of setting the end of Tristan and Isolde in a kind of Beckett-land, with both Tristan and his servant now done up like post-apocalyptic tramps isn’t *the absolute worst*. (*Actually*, given the tatters of their Les Liasons Dangereuses costumes, this is more Heiner Müller’s Quartett than Waiting For Isolde.) But again, rather than feeling exciting or revelatory as design, thinking and direction, it simply feels random. I should re-state that none of these criticisms are “in principle”; I’m not one of the anti-regietheater brigade by any stretch of the imagination, but, like anything, there can be atrocious examples of the species, and this is one. The main problem in Act 4 is that the set actually conspires to make the singing in last bit of music, the most famous bit of music in Tristan and Isolde, *actually inaudible*. Which is, y’know, an issue.

Not the most promising start to Kramer’s artistic directorship, which has generally been welcomed by the right sort of people. I’ve somehow contrived to miss every single example of his previous work, and this example doesn’t greatly encourage me to see more, but it does at least set a very low bar to achieve an upward trajectory for the rest of his tenure.