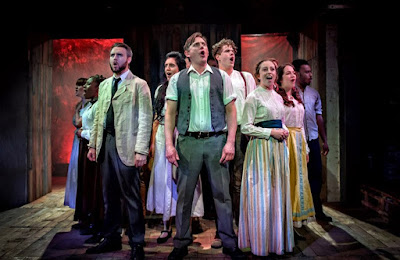 I’m starting to think the condition of successful theatre criticism is the equitable balancing of two completely opposite feelings in any given piece of writing. I came out of James Baker’s superlative production of Parade feeling ridiculously happy; bowled over by the vitality and talent of the production, just the sheer noise of the thing. At the same time, I knew that, if I wanted to, I could have kvetched endlessly about the *actual ethics* of the original musical (music and lyrics Jason Robert Brown, book Alfred Uhry, co-conceiver and original director Hal Prince, 1999).

So what to do? I absolutely don’t want to detract from the glorious success of the production. This is proper top-of-game musical theatre. Quite by chance, I happened to see the show the same night as The Stage’s Mark Shenton. A critic with whom I’m hardly known for agreeing, but who has seen pretty much every production of Parade ever made (Broadway, Donmar, Broadway revival, Thom Sutherland Southwark Playhouse revival), so for once I was more than happy to defer to his expertise. And – without wanting to steal his thunder – he seemed pretty damn impressed too. Subjectively, I thought it seemed pretty amazing, but I don’t know all that much about musicals – maybe they’re all this bloody impressive and I’ve been in the wrong game/in denial forever. But, no. This is indeed impressive, even to an expert.

The large (15-strong) cast – probably more local than not – contains at least five or six absolutely knock-out singers and the musical direction (Tom Chester) of the nine-piece band (2 keyboards, reeds, horn, string quartet and drums) is first-rate. The whole thing is miked to the extent that the chorus numbers achieve a kind of Wagnerian intensity and grandeur. So much so that the (relatively) little Hope Mill Theatre (a long low room, here playing lengthways) felt like it might burst with a combination of the noise and the sweltering heat.

But, as I say, two opposite opinions. So, alongside all this exploding vitality and talent there’s also the material that they’re performing (kind of the reverse of the 4.48 problem). Now, the first thing to say is that music theatre isn’t my natural territory. The fact I even liked this production at all speaks volumes about just how well it was doing. And, to be fair, there’s a lot in the music and the orchestration that appeals. It struck me (in my inexpertise) as having borrowed most heavily from the craft of Bernstein; echoing that mid-century mixture of new American forms, like jazz and the blues, and, as a much-needed counter-measure, the astringency of post-war European orchestral modernism. Of course, there are also syrupy, sentimental torch-songs, but one holds one’s nose and gets on with it. And, to be fair, even these torch-songs are at least deployed here with mordant dramatic irony for maximum devastation, and are quite sweet in and of themselves.

So, yes, the plot. The plot is based on the historical case of Leo Frank, who... can you spoiler history from 1913-1915? Well, I’m going to, so look away if you want to come to the plot fresh...  Basically, the musical tells the story of a kangaroo court, and an anti-Semitic lynching. Leo Frank is accused of the murder of 13-year-old factory worker Mary Phagan (“Fagin?” he asks, improbably, when she tells him her name, cleverly reminding us of older, literary anti-Semitism) who works at the factory of which he is a director. Now, because the piece is historical, it does have one massive dramaturgical problem – we never find out who actually kills the child. Moreover, a young woman gets murdered, and we are never once asked to care about her. Similarly, the casual racism of the whole of Georgia’s white population is taken as read, but there’s also an uncomfortable irony that in amongst the murder of thousands of black workers, it’s only the story of the white factory owner that gets its own musical. The #BlackLivesMatter movement would not be fans. Yes, that situation is noted in the song at the top of the second half (‘A Rumblin’ and A Rollin’’), but both that and ‘Blues: Feel The Rain Fall’, with their “Negro music” pastiches, sail pretty close to outright minstrelsy – albeit, delivered with such outright barnstorming, knowing conviction by Matt Mills (duetting with Shekinah McFarlene in the former) that you maybe forgive the possible solecism on the part of the writer.

I daresay a Marxist-Leninist, would find it hard not to think there should be a Brechtian re-write that stops at the end of the trial where the factory owner who “employs” child sweatshop-labourers is sentenced to death. Wrong reason; right result. Now, that would be a morally complex piece of work.
(But – disclaimer – unless the citizens of Atlanta had then gone on to lynch every other factory owner, irrespective of race or religion, and foment America’s long-overdue communist revolution, then yeah, it’s just racism. So, no dice.)
(That we’re also sitting watching this in a former cotton mill, probably not dissimilar to the ones owned by Engels, also here in Manchester, complicates this no-nonsense Marxist approach so much further, it almost makes you dizzy.)

So, yes, perhaps it’s best not to think about unpicking the material too hard. The production hasn’t gone full-Marthaler on it, and so it seems safer to go back to celebrating the great evening out and the massive amounts of talent on display here. From Aidan Banyard’s belting opening number The Red Hills of Home – think Barrowman crossed with Domingo, Banyard has a *serious voice*, through the gently nuanced performances of Tom Lloyd as Leo Frank and Laura Harrison as his “plucky, resourceful” wife Lucille (yes, the gender politics of the piece are roughly *progressive for the period in which the musical is set*), to the aforementioned gorgeous voices of Matt Mills and Shekinah McFarlene (both of whom I’d now pay good money to hear sing more or less *anything*), this really is a show jam-packed with talent. Moreover, on a humid Tuesday night, in a week’s extension to the originally-planned run, the theatre was also absolutely packed, and saw the most spontaneous standing ovation at the conclusion that I’ve seen since Iliada in Belgrade.

This is the Hope Mill Theatre’s first in-house production, and if this is what we can expect regularly, Manchester has just got about as lucky as it’s possible to get.

Excellent review expressing precisely the contradictory feelings I had about the show. Troublesome material in places - barnstorming, breathtaking performance. Thank you for expressing it so articulately... I hope you don't take that as patronising in any way! It's just that so much internet criticism is poorly written, so reading your piece was a breath of fresh air (excuse the cliché!) - and considered intelligent criticism needs to be championed!!