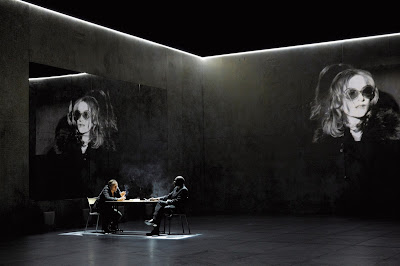 Director Krzysztof Warlikowski’s Phaedra(s), hailing from Odéon-Théâtre de l’Europe, is an intriguing proposition; promising to bring together texts by Wajdi Mouawad, Sarah Kane and JM Coetzee, and starring French actress Isabelle Huppert in the central role of each. It runs for roughly 3hrs40 (inc. interval).

The set of the thing is one of those large, blank, three-walled rooms with a bit of added texture that we’re maybe a bit bored of now. The texture here is a back wall hinting at tiles, and two side walls made of glass – the right hand side wall of which turns out to be a large moveable room which glides to the centre of the stage to house most of the scenes from Sarah Kane’s Phaedra’s Love.

Phaedra(s) kicks off with Mouawad’s reflections on Phaedra and Aphrodite – it soon becomes clear that this collage of authors isn’t going to be transformed by a miracle of dramaturgy into one continuous, fractured narrative; instead we’re basically getting three one-hour-ten-minute pieces in rapid succession, and with one fewer interval than would have been nice.

To get things going, a guitarist stands toward the front of the stage, and a scantily clad dancer leans on the back wall. Isabelle H. comes on and does some speaking. The non-French-speakers amongst us do some reading-of-surtitles, and maybe a bit of head-scratching at the most flagrant display of on-stage chauvinism (in the form of the dancer) since probably the last century. Not to mention to ludicrous Orientalism. For the first hour or so of Phaedra(s), I honestly didn’t think about much except a difference of approach that allows anyone to think that cod-Arabic music and an exotic dancer is a clever setting for this piece. I mean, that it didn’t work for me should be clear enough, that’s fine; that’s subjectivity. But I genuinely don’t think any British theatre director would even begin to think this was an ok way to make work. Or an ok thing to show. Or an ok way to treat a female performer. Or the idea of an ethnic identity. But then I worry that perhaps UK theatre has got so used to second-guessing what might offend people, that we have now become terrified into the entirely anodyne. I mean, I don’t think we have, but it’s an idea worth examining when your chief thought when looking at a piece of French/Polish theatre by internationally respected artists is “You wouldn’t get away with that here.” (Ironically, it’s only my respect for their cultural difference that stops me machine-gunning the whole sorry enterprise right here. So: challengingly “international” – yes, but perhaps not in quite the way LIFT hopes.)

Then it all perks up a bit. Largely because part two is a fairly large amount of Sarah Kane’s Phaedra’s Love and there are jokes in Sarah Kane’s work. Jokes and Swearing. The way it’s being performed isn’t especially funny. Or especially good, really (another Cleansed this absolutely isn’t). But, then, we’re just reading the surtitles, aren’t we? And the French and French-speaking Polish actors can’t fuck up our reading of the lines – even if they are making a right meal of their own delivery – so we’re all good. The mood in the room improves dramatically. And it’s nice to see Phaedra’s Love on such a large stage, even if only being given the most cursory of productions.

What’s best about seeing PL now, post-4.48 Psychosis (the opera), and post-Cleansed, is appreciating how many of the seeds and themes – especially of 4.48 – are there in this earlier work. The moment where a doctor asks Phaedra about her friends – why she has friends – is almost impossibly sad in the context of the opening of 4.48. It becomes so starkly clear – even in, or perhaps partly because of, this stark, misfiring production – that Kane’s read on Phaedra is as a blackly comic love story between two people with the worst depression/mental illness imaginable; trying to negotiate the fact that their happiness depends on each other. Or rather, it’s love with the possibility of happiness removed from the equation altogether. Critics often situate Phaedra’s Love as Kane’s “weakest” play. Here at least we get to see they do this because they’re thinking about it wrong.

The theme of love in extremis is continued by JM Coetzee’s Elizabeth Costello, in which this fictional female author wryly meditates, within the frame of an awkward stage-interview, on the theme of what relations being humans and gods must be like. It proposes that humans must at least offer *something* that Gods want, at the same time as pondering how the human body might withstand divine intercourse, and why it’s a shame no one really talks about it. In the frame of this talk, we’re even shown clips of films – Pasolini’s evocative Teorema – Silvana Mangano effortlessly dominates the stage (as she also does in Alles Weitere...). Coupled with Janet Leigh’s repeated murder shown over and over again on the TV screen in Hippolytus’s bedroom in Phaedra’s Love, this maybe all adds up to something, but again feels so vague as to be almost immaterial. It certainly feels hackneyed to the point of ennui.

This final piece almost edges towards a kind of conclusion. And is doubtless the most succesfully performed of the three. (And there are more jokes, without even the mordancy of Kane, so the auditorium perks up even more...)

But, oh, God, that scantily clad dancer makes another appearance between the end of the Kane and the beginning of the Coetzee... I mean, we all know there’s nothing wrong with nudity/near-nudity *per se*, but you can still spot unreconstructed, unconsidered sexism from a mile off. Why this is being held up as outstanding international work is beyond me.

So, yes, although I’ve tried my best to be scrupulously fair to this piece, and think about it on its own terms, as far as those terms don’t cross non-negotiable ethical boundaries. It’s not one of the best piece of theatre made in the world since the last LIFT, or even in Europe, or in France or Poland, and it’s difficult to resist the idea that it was accepted sight-unseen on the basis of the names attached. And it’s a shame it doesn’t really pan out. I do think there’s probably some interesting thought buried deep, deep inside the work, but I would humbly submit that 90% of people will find it as slapdash and alienating as I did: cleaned-up dumbed-down Castorf-lite, right down to the signature spiky high-heels.