Europe: a Tragedy of Love and Ideology 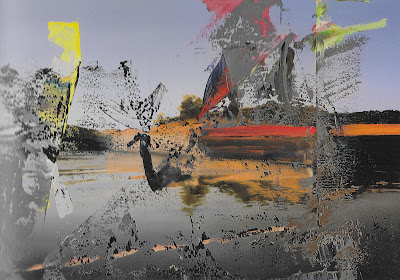 “Summer. A river. Europe. These are the basic ingredients...”

“The Greek government failed to resist the austerity measures demanded by the Troika with devastating consequences for millions of Greek citizens, a majority of whom voted against those measures in the referendum of July 5, 2015.”

“This is not a friendly takeover. It is an irreversible turning point and a break in the recent history of the theatre. This change represents historical levelling and razing of identity. The artistic processing of social conflict is displaced in favour of a globally extended consensus culture with uniform presentation and sales patterns.”

“Love, for me, is an extremely violent act. Love is not “I love you all.” Love means I pick out something, and it’s – again – this structure of imbalance. Even if this something is just a small detail... a fragile individual person... I say “I love you more than anything else.” In this quite formal sense, love is evil.”

In their performance quite the best news in some considerable time Lindsay Goss and Nicholas Ridout say that they want to avoid “left melancholy”. The piece takes its title from a comment on the victory of the Left-wing, anti-austerity, anti-neoliberal EU party, Syriza, in Greece in January, 2015. The left melancoly they want to avoid derives from the fact that, despite having been elected, and despite the Greek people having voted to reject austerity in a subsequent referendum, the European Union imposed the measures regardless.

The Leave victory in Britain has been framed as, and is largely understood as, a victory of the nationalist right, despite it also being a clear victory for the communist left. In fact, the particular reasons behind each Remain vote, Leave vote, and abstention are as unknown as each voter’s secret love, darkest secret or favourite pop song.

On the streets of England, several dozen racist incidents have been held up as evidence of a far right emboldened by the winning leave vote. While, in Westminster, even the very fact of Britain actually leaving the EU at all seems far from assured as Article 50 remains uninvoked by the economic neoliberals. After the referendum, as before, nobody really seems to know what is going on, or why.

In the anger of some thwarted Remainites over the weekend it could be argued that many of the things that some of the Leave side were rejecting could be observed: their demonisation as racists, the condescension toward their ability to hold a view at all, the characterisation of their views as uninformed or incorrect. Ready-formed reactions as full of the prejudice as those which left Remainites claim of their Leave counterparts. That the majority of Remain voters live in Britain’s affluent cities, and the majority of Leave voters live outside them, lent an ugly sheen of monied, metropolitan condescension to the well-meaning, good-hearted pleas for calm, inclusion and love. In the violent actions of some victorious Leave voters, this view sees itself to have been vindicated.

If the Leave vote does cause a recession, how much worse it will actually make things for the majority of Leave voters? Could it be framed as the most effective, quiet, democratic revolution ever seen; two fingers stuck up at everyone who has profited from the ongoing marginalisation and immiseration of those revolting. “How much worse can it get?” their votes perhaps demand. “What have we got to lose? Nothing. What have you lot got to lose? Lots. So there you go pal, fuck you.”

And, while Leave rejoice in their apparent racist nihilism – having in fact delivered a massive trauma to a symbol of neoliberal capital – the powers in Westminster may even be poised to prove everything that Leave’s most paranoid theorists suspected all along; that they have no voice at all, that Leave’s victory in the referendum will ultimately demonstrate nothing more than a neoliberal elite’s power to override their wishes.

“[Thomas] Martin [one of lead signatories of the Volksbühne letter,] denied criticism that his protest mirrored the same anti-globalisation fears that have elsewhere surfaced in the Pegida protest movement and the rise of Germany’s anti-immigration party Alternative für Deutschland. “We are not afraid of the new. In fact, we were one of the first theatres in Germany to put debates around globalisation on the stage.” Earlier this year, the theatre hosted the launch of former Greek finance minister Yanis Varoufakis’s new pan-European leftwing movement DiEM25.”

The Slovenian critic Rok Vevar says of Brexit: “The thing is, the EU refuses to share responsibility for this devastating historical mistake called Brexit. We all have to “leave” in order to establish an EU that won’t be run on the neoliberal agenda. I find it totally inappropriate (but totally expected) that other EU members along with a EU commission refuse to take any responsibility for Brexit. All the governments of EU member states including the commission should resign after Brexit. It proves that there is something fundamentally wrong with the present EU structure. What happened in Britain is a symptom more than anything else. Junker really helped to convince those undecided in UK to vote Leave. It was more or less only a matter of time; it could happen also elsewhere – although you, living in GB, are convinced that could happen only in GB. The political left has to come up with its own new concept of a political state and union. Once that happens, things are not irreversible anymore. The amount of fascism in the EU is connected with a lack of imagination on the European political left. Let us not be depressed.”

The British economist Paul Mason argues: “In the progressive half of British politics we need a plan to put our stamp on the Brexit result – and fast. We must prevent the Conservative right using the Brexit negotiations to reshape Britain into a rule-free space for corporations; we need to take control of the process whereby the rights of the citizen are redefined against those of a newly sovereign state. Above all we need to provide certainty and solidarity to the millions of EU migrants who feel like the Brits threw them under a bus this week. In short, we can and must fight to place social justice and democracy at the heart of the Brexit negotiations. ”

The Spanish socialist MEP Miguel Urbán Crespo said: “When parliaments become theatres, we have to turn theatres into parliaments.”

The British theatre critic Matt Trueman writes: “Theatre can counteract [the ‘stream-based, individualistic culture [in which] we are living increasingly atomized, slightly disconnected lives. We are spending time staring at our phones rather than looking at people’s faces - that in itself is actually leading to a lack of empathy and neuroscientists are telling us that it’s limiting our ability to be empathetic’ – Mark Ball]. It is a human art-form that requires us, as an audience, to try and understand others. It is nothing less than an empathy machine”

Trueman is essentially suggesting that Leave voters need theatre to understand their mistake. There is no suggestion that Remain voters need to try to understand the logic of the Leave voter. It is both simplistic and inaccurate to paint Remain voters solely as comfortably-off, city-dwelling multiculturalists. Just as it is a mistake to paint Leave as solely the preserve of an uneducated, disenfranchised, racist poor. A victory for Remain would have endorsed not only open borders (within Europe), but also the punitive destruction of the Greek economy and mainland Europe’s largely hostile, racist attitude toward Middle-Eastern and North African refugees. The victory for Leave need not be understood as xenophobic and right-wing, but as a progressive blow against the interests of neoliberal capital.

Globally-minded left Remain voters could take solace, for example, from framing the Leave vote as a rejection of the razor-wire fences erected across Europe’s southern borders in Bulgaria, Macedonia, Slovenia, Hungary and Croatia against the refugees fleeing the slaughter in Syria, Iraq and Libya, and as an act of solidarity with the Greek people.

To return to the Žižek quote at the top of this piece, and to its title “a Tragedy of Love and Ideology” – borrowed from the second of Martin Crimp’s ‘17 Scenarios For Theatre’, Attempts on Her Life – and to the question of empathy; what seems to be missing from all Brexit analysis so far is the frank admission that everyone is acting out of love. In Brexit, we see the problematic reality of Žižek’s apparently playful, deliberately provocative formulation: “love is evil”.

Let us, for the time being, tune out the idea of “hatred”, and let’s instead focus on people’s “best motivations”. People have voted in the interests of their families, of their communities, and of their country. All inspired by love. They only want what’s best for their children. Etc. They only want to see their country have the right to determine its own future. Etc. These are not inherently motives with which we disagree. Who doesn’t want the best for their child? Who doesn’t believe in the right of a country to self-determination?

People have voted as sensibly or as optimistically as they dared. The EU, as it stands, is unloved. For the left, it betrays all but the 1% with its financialization of a continent. For the right, it betrays the principle of absolute self-determination, either per country, or per individual. People voted emotionally, with emotional pragmatism. National love or international love. Belief in capital or belief in a possible Socialist future. People voted with all the facts or with none. People voted accurately for their interests, or inaccurately. There arguably wasn’t even a result good or bad, but thinking makes it so.

We have still not walked anywhere in anyone else’s shoes.

We voted five minutes walk from our houses in streets that we’d never even seen before.

We still aren’t listening to anyone else.

We think they still aren’t listening to us.

We know we are right.

We have not yet reached the fifth stage of grief.

We realised something about the question we wanted to answer.

“What is the role of the intellectual in the revolutionary struggle?”

We realised that this question suggests, if you ask it the wrong way, a kind of left melancholy.

By which we mean, the intellectual’s conviction that there is nothing to be done.

That in effect, the intellectual has no role in the revolutionary struggle, and can stop worrying about the whole thing altogether.

This is also a way of avoiding sincerity and of being cool.

We think it is the wrong way.

In place of left melancholy we wanted pleasure and joy.

We thought that Freud was probably right about laughter.

We had no moral compass, or if we did have one it had been badly damaged in the frequent electrical storms.

We lied when it would have been easier to tell the truth.

We sent death threats by fax machine and kept a list on a computer of people we were going to kill.

We were class-traitors, cry-for-help shoplifters, we were murderers of sleep.

We loved each other too much.

We held each other’s hands.