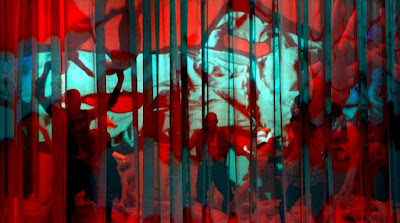 I don't know the last time I left a home-grown piece of theatre feeling quite so electrified.*

Joe Hill-Gibbins takes Measure For Measure and knocks it out of the park. And he does it by making the play as much like itself as it's possible to imagine.

There’s no “concept” here, as such – although there’s clearly a lot of thinking about what the play means, how it operates, and the ways it can *mean* now – just unfussy modern dress, a brilliant design and one of the best companies of actors currently gathered in England.

Miriam Buether’s design brilliantly steals/suggests Robert Borgmann's design for his Burgtheater production of Die Unverheiratet (Measure For Measure is set in Vienna, after all), but adds to it a large, bare backroom of the Young Vic’s unadorned breezeblocks. The other main design elements include video-live-feed-projection (cf. my notes on Joe H-G’s Edward II), projected images of medieval religious allegorical paintings, pastiches of Gilbert and George pictures, early ‘90s rap videos, and a really huge pile of inflatable sex-dolls.

These inflatable bodies are a masterstroke. Co-opted as everything from participants in the opening “orgy” to the inmates of the prison, when they’re in the fore-stage they feel both embarrassing and ludicrous, dividing the audience into Id and Superego responses of Studiedly Not Laughing and openly laughing a bit too much. More fascinating, though, is that when Angelo (I don’t need to tell you the story, do I?) enacts his crackdown on sex-work, and these pathetic feather-light bodies are flung through the air into a heap in the back room, the result looks, just briefly, like a hideous parody of those photos from Belsen. Without the point ever being underlined, you suddenly realise just how not funny police brutality against women working as prostitutes is.

But – and while the lights are great, and the sound design is pretty awesome** – the real genius here is in the performances. Christ they’re good. It feels like each one has been honed within its own precise universe. You know how sometimes it feels like all the actors are in different productions and it’s a problem? Here it feels like a brilliant choice, and seems to speak about class, and expectations, and just attitude generally. Like, Zubin Varla – I bloody love Zubin Varla anyway, but – in this his version of the Duke is almost a kind of madness. His first speech... The way Sarah Malin, as his aide, Escalus, just looks at him dumbstruck – her “listening acting” is almost too compelling – the way he’s tackling his lines; spitting out odd syllables, almost mangling the sense out of revenge against school-taught Shakespeare; or perhaps forensically admonishing some quite shoddy scene-setting. But all the while within a completely realised character as well. The best way to imagine is maybe thinking of the way opera singers do text – dictated by music rather than syntax.

All the other performances seem to exist in a different universe to this and each other. Romola Garai, for example, seems – on one level, particularly at the start – to be living much more in the world of “pure Shakespeare” (all RP and a nice loud posh voice, and indeed *white*; as Sir Trev implies it should be). And, rather than feeling like a limitation, it feels like a very clever choice. Here she is, this Isabella, in her convent/nunnery, talking in this “pure” voice, in these sentences that seem to come from a different universe to the seamy world in which her brother is somehow involved. Garai is brilliant too, btw. They all are. And later, when the arc of the narrative turns against her, she goes all out with tear-soaked, snot-dripping fury like she too is suddenly possessed by Courtney Love. Close up (row F), its a properly visceral thing.

As her brother, Claudio, Iavanno Jeremiah doesn’t actually get to say a lot – he’s stuck in prison and being spoken for a lot of the time – but, blimey, when he does get speak, by Christ he’s good. Really good. It feels like a godawful cliché to invoke “inner calm” or something, but the power of Jeremiah’s Claudio is chiefly this incredibly charismatic silence, and clarity when he does speak.

Against this, John Mackay as his lewd and rambunctious mate Lucio basically recalls a young Ian McDiarmid. Which, when you consider that Ian Mc. was one of the best actors going for a very long time, is no small thing. He’s got that same lean, fox-like kind of intelligence, if that makes any sense at all. While Tom Edden turns the (hitherto mostly overlooked) part of Pompey into what *might* be construed as a kind of stereotypical Jewish American pimp-cum-lawyer from the 70s. It’s *a lot of fun*. And, Christ! How lovely to see Hammed Animashaun from Secret Theatre on stage again too.

Going back to this idea of these characters from different walks of life being from almost dramatically incompatible worlds, it seems entirely fitting then that Paul Ready’s Angelo most readily recalls our hideous Chancellor of the Exchequer, George Osborne. Paul Ready, I should emphasise, doesn’t resemble him at all. This is *acting*. But Ready absolutely captures here precisely that soft, pampered, flabby, smirking smile that crosses the idiot Tory’s face every time someone catches him out. But, by God, to do this while pretty much making all the knotty Shakespeare-language sound somehow more like modern English as well is yet more proof that Ready is another of the best actors we’ve got. The only drawback to this approach at all is that, in our more cynical age (and not much more, judging by this play), we’re hardly surprised when prize prigs like this turn out to also be rank hypocrites of the first water.

I’m not sure I’ve ever really *felt* this done before. Certainly not so seamlessly. Not in such a coherent world-of-the-play, which it *of course* happening emphatically *on a stage*, but also in our imaginations. I’ve often felt that the complaint that characters “all seem to be in different plays” should feel more true to life, and here it does. The production is also effortlessly multi-racial in a way that should have Trevor Nunn reaching for a glass of whisky and a revolver***.

So, yes. This is Measure For Measure alright. Turned against itself, and against the world. Mercifully, it doesn’t really underline any particular specious passing similarities with horrible UK in autumn 2015, it just gets on with the story, although, unless you’ve had your head under a rock, thing after thing, resonance after resonance will strike you. And, so, yeah, I think you just come out kind of high on theatre, but kind of fighty. There’s a deftness and a lightness to the way that the just terrible problems of the play’s conclusion are kind of presented gleefully straight. I mean, the ending *is* completely flawed, so staging it as a total WTF car-crash ceremony seems the best solution.

If you happen to be reading this before the production closes (14th November), for God’s sake go and see it. I reckon it’s one of the best stagings by a British director of anything this year. Definitely.

** The sound *is* good, if a bit underline-y in places. But where Die Unverheiratet chucks in a rabid re-working of DAF’s Tanz Der Mussolini at random, here we get a really on-the-nose use of ALANIS MORRISSETTE FFS. BLEUGH.

*** Ok, I’m manifestly not the person to call this, and it’s only a small hunch, but I did worry that while the play *looks* brilliantly multi-racial and had colour-blind casting, I did worry (like the guilty white leftie that I am), that the characters played by black actors had proportionally fewer lines than white actors, and possibly these had been further slimmed in this particular edit.
And I worried – slightly – about the available symbolism of having “pure, virtuous” Isabella played by a white actor while her naughty brother was played by a black actor. On the other hand, the fact of (black) Claudio being arrested as soon as (white) Angelo came to power also looked like the sort of arrest that is routine in contemporary UK and USA every day. Indeed, actually, without once overselling the idea, that feeling of wildly racist injustice is never far from the surface here, even while the apparent subject is still Angelo’s “moral crusade”. But how fitting, after all, that it should be so. After all, it’s never “because they’re black” that people get arrested in UK or USA either. It’s just an ongoing striking coincidence...
[edit: this is obviously not just a black and white issue, and the largest part in the play, the Duke, is played by Zubin Varla.]
___

I reckon this, not Morrissette, and bingo: 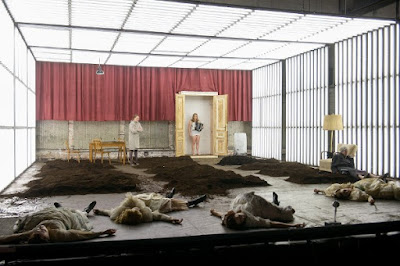 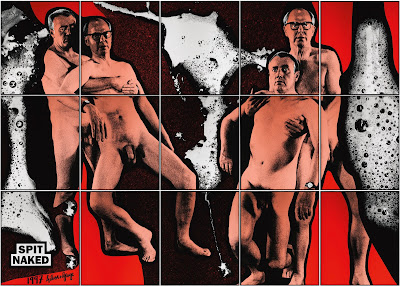 Brilliant review! I have just come from a matinee,and am reeling from how good it was. I've been looking up reviews and yours is the one which hit home for me. I particularly like the fact you mentioned John Mackay- he was amazing. Well, they all were. Thanks for putting into wise words exactly what I thought.