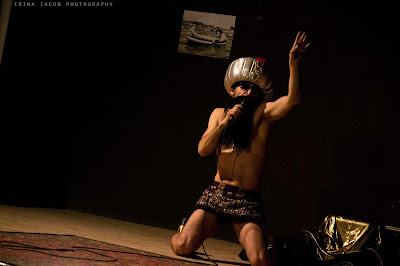 Realia is the new “dance” piece made by “Farid Fairuz”. Which is a lot of scare-quotes for a first sentence. I suspect I’m going to be qualifying the term “dance” a lot over the next few reviews. If you’re not at all with familiar with contemporary dance (hello, mum and dad), then you might be surprised by the extent pieces need not include much *actual dancing* or even movement. As is the case here. I would say at least 70 per cent of Realia is spoken word.

The second set of scare quotes concern Farid Fairuz himself. I hope it’s not too much of a spoiler to explain that Farid Fairuz is a total fiction. It seems not-spoilery (to me) because Fairuz has been made up by Mihai Mihalcea – who was the artistic director of the (old) Centrul Naţional al Dansului, before the organisation was effectively evicted from their former premises by the government. As such, Mihalcea is a very well-known figure in Romanian Contemporary Dance, so the fictional, Lebanese-born Fairuz character isn’t really meant to “fool” anyone.

That said, I went in not know any of the back-story. I had read the below blurb:

“A performance in which dramaturgy blends temporal plans, real and fictional events from the life of a character living simultaneously a double identity: Mihai Mihalcea, born in Bucharest, and Farid Fairuz, born in Beirut. ‘Two years ago I had to invent myself a character so I can still exist. Now I’m Farid Fairuz and I tell you two things: The Ottoman Empire did not disappear. A part of it has for sure remained inside me; everything in life is connected to pain and pleasure. Otherwise I cannot explain myself anything from all this…’”

Maybe it’s a testament to the number of blurbs I read (or the number of British shows about dual-identity), but I reckon you can get through that and manage not to read a word of it literally. Instead, possibly you read an account by someone of mixed heritage making a show trying to reconcile their diverse backgrounds.

Fairuz/Mihalcea stands before us wearing a PVC bodice and mini-skirt and occasionally puts on sunglasses, a long wig and fake beard. And mostly he recounts stories from his biography and offers us his thoughts on the world. Here we don’t know what stories are “real” and which are made-up, or Lebanese-ised versions of Mihalcea’s own autobiography. The stories and observations themselves are totally charming and frequently very funny. Also, at one point, F/M (the initials FF and MM themselves don’t feel like an accident – reflecting as they do, a further question of gender alongside nationality and/or ethnicity) does perhaps the best cut-through-the-fourth-wall I’ve ever seen. It’s a strange phenomenon, given that he’s clearly talking to *us*, the present audience, all the time, so to manage a specific moment where he “comes out of character” (especially while potentially still “in character”).

It reminded me very much of a lot of the work seen at Forest Fringe – indeed, the performance style coupled with the subject made me think especially of an exact mid-point between Brian Lobel and Tania el Khoury. Indeed, I texted Andy Field the moment I got out of the show, suggesting he book it for next year’s Forest Fringe, or Forest Fringe at the Gate.

The really interesting, *crunchy* point for me was the question of how the piece would be received in the UK. Granted, I’m not a programmer, so it’s not really my problem, but I would LOVE this to come over. And, as an ersatz, erstwhile “critic” it sort-of *is* my problem. Because I think the British (certainly theatre, maybe dance less so) might have problems digesting it. The main problem is that of “Orientalism”. For a start, we in Britain have a *very* different relationship to the ex-Ottoman Empire to the Romanians. As far as I understand it, we (the British) just went into the ruins of the Ottoman empire as it collapsed post-WWI and maybe colonised for a while. Romania, on the other hand, has never been a colonial power, but has been repeated subsumed into other empires, or else co-opted as part of the “Eastern Bloc” post WWII (-interestingly, a bit like ex-Yugoslavia, but with a bit less distinction, Romania didn’t really get the full Stalin treatment. My impression was that Ceaucescu and his predecessors just made it clear that they weren’t going to cause any problems for the USSR, weren’t going to flip and get American air-bases, and in return, were allowed to practice whatever grotesque dictatorships they fancied in the name of communism).

But I’ve gone a bit off-topic. My point is, watching a Romanian perhaps slightly burlesquing being Lebanese is a very different thing to watching a Brit do it. And I think, though perhaps our initial natural reaction might be to be concerned, a) the difference of relationship is crucial, and b) I also think it comes from a place of affection and curiosity rather than Orientalism and/or prejudice.

Amidst all this diversionary wondering, I should also mention that Fairuz/Mihalcea also turns out to be an awesome dancer. Whether trained in the ballet school of Beirut or Bucharest, he can still (at 44 – this performance was his birthday, he gave us cherry wine) execute what looks, to my untrained eye, like pretty impressive ballet – at the end, he gives us his Odette/Odile from Swan Lake: he, like all th other boys in his ballet school, he tells us, was always jealous of the parts for girls in ballet.

And it’s in these moments – freed of both gender and “identity” – where I think we see what the show is driving at most clearly. A disatisfaction with having to play the fixed, continual role of “yourself” in “everyday life”. The idea that if life is a performance anyway, the question of why can’t it be a better, more exciting one.