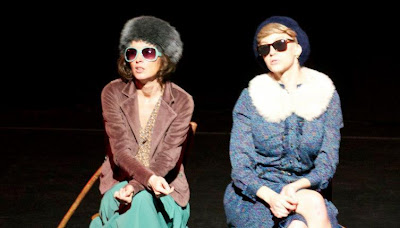 Two women enter the space. They are dressed in the sorts of clothes we might most associate with our grandmothers (although I’m pretty sure grandmothers these days dress differently. Whatever happened to old people who dress as old people? They’re a dying breed): old-fashioned coats and hats, and walking sticks.

They walk, agonisingly slowly, to the middle at the back the stage and from there they totter forward, their motion tracked by a video camera in the central aisle of the studio. What the camera records is projected simultaneously, with little affectation, onto a screen to the left of the stage; slightly bleached out by the lights, slightly fuzzy and indistinct.

Once they’ve reached their mark, they explain the concept of the show. They have made this piece in 2011, and they are going to make it again when they are over 60 years old (at some point between now and then, they’re going to stop touring this “young” version). Performers Mădălina Dan and Mihaela Dancs are in their thirties, so we will not get to see this new version until 2041.

They then talk about themselves briefly, how they’re feeling, what they’ve been up to recently. Dancs talks about her boyfriend and new career highs, -- that sort of thing. Then Dan talks about her latest course of radiotherapy.

There was already something poignant about the image of these two young, beautiful women pretending to be old in a show which they will perform again when they won’t be pretending so much, but having been diagnosed with non-hodgkin's lymphoma (after the show had been conceived and first performed – this was never part of the plan), the video takes on a whole new level of reflection. It feels crass to spell it out. Of course, anything could have happened to either of the performers in the thirty years between the first and second incarnations of the show, but this new fact brings the possibility into very sharp relief indeed. From there on, the concentration deepened, the laughs gained a real edge. A near-unbearable bitter-sweetness hung about this already excellent concept.

Stylistically, the majority of the first half of the show is very funny. Performing in English, the Dan and Dancs are oddly like a French and Saunders or Smack the Pony sketch with Romanian accents. And, yes, they’re being deliberately funny, wry and ironic, I’m not just imagining it because "the accents are cute". Pinning down precisely why they are so funny is harder (there are reasons I’m not a comedy critic), but I think it boils down to their air of pretending to be quite grand, and Dan’s habit of restating things Dancs says, with an added layer of – most of the words I want to use here are more sounds that might be transcribed as an extravagant “Pffff!”.

The second half, which includes more of yer actual dancing, also includes a lengthy sequence of full frontal nudity, which is probably even harder for this (white, Western, heterosexual) male critic to write about than comedy.

[I am actually pretty serious about this subject of how we might discuss this subject in a way acceptable to these days where we’re actually thinking seriously about feminism for the first time since the eighties, and are interested in being progressive. Because, on one level, we can’t pretend people aren’t at least a bit moved, and moved differently, by the sight of naked people, can we? So what are we meant to say about this?]

What’s fascinating about the nudity (or is it nakedness) here is that like everything else in the show it is actually making you think about the future version of the scene (although I have no idea what the future show will look like – whether it will be a kind of Wooster Group exercise in recreating from video, or something in which that sort of thing is framed). You look at the smooth skin and the frankly enviable figures in front of you, and because of the concept, you mostly think about what ageing does to the human body. Without special make-up effects or prosthetics, two young women’s bodies make us think about two old women’s bodies. We think about what is lost an what is gained by ageing. Perhaps about the possibilities of child-bearing, and motherhood (these things do get mentioned too. I’m not just projecting onto “women” generally). There’s also the movement. Having flagged up the fact of movement so frankly with the hobbling onto the stage, the faster, and the sexier dance moments are moving now partly because of the difficulty and perhaps perceived “awkwardness” of these sequences in thirty years.

Watching this shortly after Edinburgh I was reminded of Deborah Pearson’s The Future Show. There’s a similar nobility of intention. In fact the two pieces would be fascinating to see them as a double bill.

So, yes, another massive transfer recommendation. I’m not sure for how much longer Dan and Dancs want to play this version before putting it away for its (now) 28-year hiatus, but I hope a lot more people get to see the remarkable, poignant, moving work before it is mothballed. 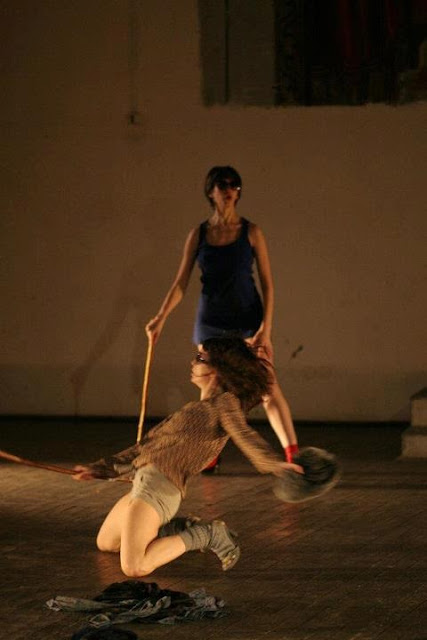