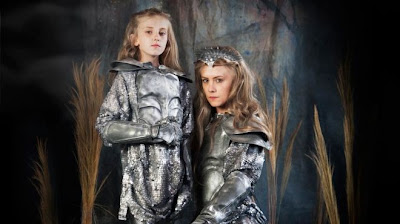 Back in 2010, I saw an early version of a show called Sex Idiot. I think it was still in previews, not that anyone bothered telling me. I duly reviewed it, wondering aloud if Bryony Kimmings was even a real person (“I'm going to keep her name in quotation marks for a bit, because I'm not at all convinced she's actually a real person”).


“Instead of cheering you up, making you laugh, moving you, or reminding you of the astonishing feats of talent, imagination, generosity and nobility of which the human animal is capable, this show really does make you feel the sheer pointlessness of it all. More than Kafka, more than Camus, more than Beckett, “Bryony Kimmings” is the “artist” who most makes you feel the grinding, grating, relentless banality of human existence.”


It’s probably one of the most relentlessly vicious reviews I’ve ever written. I’ve not been proud of it for a while. Even if I still stand by how I felt about that particular show on that particular night I saw it (I do), I could have expressed it differently. I could certainly have taken less pleasure putting the boot in.

Still, there’s nothing better than someone coming back and making you eat your words.

If in 2010 Bryony Kimmings was the artist who made me most despair, in 2013 she has become one of the brightest beacons of hopefulness on the British stage.

Credible, Likeable, Superstar Role-model is, by any measure, an extraordinary piece of work. Kimmings has devised the show with her nine-year-old niece Taylor. Partly, it comes from Kimmings exploring her anxieties about the world in which Taylor is growing up, but perhaps more movingly, it comes from inventing the most brilliant summer holiday adventure imaginable.

The basic deal of the show is that Kimmings has asked Taylor to invent a role-model she’d actually like to live up to. Thus Kimmings spends much of the show playing credible alter-ego superstar Catherine Bennett: a palaeontologist pop star whose boyfriend is a proofreader (a total result for proofreaders everywhere).

This mixture of different levels of reality – Kimmings and Taylor talking about the real world on stage; Kimmings and Taylor both actually being on the stage doing the show; and then the fact that the show is just the tip of a wider project: Kimmings performing in schools as Catherine Bennett, Kimmings and Taylor appearing on Radio 4’s Woman’s Hour; and now Taylor and Kimmings picking up a Fringe First for the show together, with Taylor giving a speech about how proud she was to be a feminist – is not only clever, but profoundly affecting.

This is, after all, a show that is really making an actual difference just by the simple fact of existing. That it has gone on to be widely acclaimed only makes it all the more moving. On one level, that it has been so warmly received obviously underlines the resonance of Kimmings’s central thesis – that we’re not all that happy about the world that’s currently being sold to our children, and that we’re all totally charmed by Taylor’s parallel, and more real reality, where kids are more into dancing and dinosaurs than money and fame. Ultimately, I’d suggest that the real subject of the show is not simply gender role-models and the internet, but the poverty of aspiration that is being sold to children – a model of social mobility available only through fame and sexualisation, rather than through any education, artistry or application.

Perhaps we are ultimately moved by Kimmings’s own personal journey most of all. Because this is clearly a show that is made out of very real rage and love. There’s a moment toward the end of the show where Kimmings talks about Taylor while Taylor wears a pair of sound-excluding headphones. Her voice trembles slightly with emotion. We’re watching someone who has discovered something she really gives a fuck about. Something that she is angry and passionate about, and the whole Fringe has fallen in love with that sense of mission. And how much more exciting as a reviewer for your discovery of the Fringe to be that someone you’d written off as dead inside turning out to be your absolute hero.