[mostly a pedantic argument about terminology] 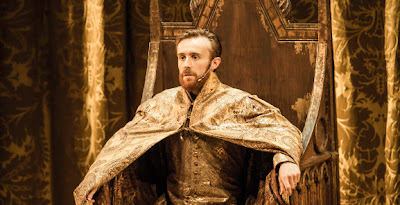 To judge by the Twitter-buzz following Wednesday’s press night for Edward II, you’d have thought that Joe Hill-Gibbins had just poured the whole of the Volksbühne onto the NT’s Olivier stage. Suffice it to say, he hasn’t.

Phrases like “director’s theatre” and adjectives like “European” really aren’t at all helpful here. Let’s be honest, they’re never helpful.  Britain is part of Europe, and almost all plays have directors, no matter how invisible they consider their hand to be. But we know what these shorthands mean. The thing is, as with all shorthands, they’re blunt tools for analysis. If there wasn’t such an ill-informed fuss about “Europe”/“Europeanism” and “Director’s Theatre” then at least the latter might mean something, but given the span of directors that the old-hat catch-all term regietheater covers in Germany, even that should probably be put into the same bin-for-crap-thinking as “In-Yer-Face-Theatre” and “New Writing”.


So, let’s talk about what actually is here. Joe Hill-Gibbins has made a new production of Christopher Marlowe’s 1594 play Edward II. It runs at 2hrs45 including a 15min interval, and I’d say it’s a pretty faithful version of the text. Probably “some” lines have been cut, and I expect the word “assholes” isn’t in the original, but on the whole, I reckon this is most of Marlowe’s play.

The pre-show stage has a member of stage management hoovering a downstage semi-circular yellow carpet while a musician plays anachronistic Bach-ish harpsichord music on a Yamaha keyboard. Behind them, the backs of wooden flats, clothing rails of costumes, lights, the mechanics of a theatre’s back-stage, and ultimately the looming black back walls of the Olivier itself. It’s an aesthetic that never fails to make me smile, no matter how ancient and old-hat it now is. But attend upon the suspiciously period armour on the clothing rail, the narrow leaded windows set into the flats, and the ornate, golden, heavy velvet curtain hanging ominously above the stage like the ghost of Victorian theatre.

The show opens with a crash and a loud video montage showing portraits of British monarchs beginning with Elizabeth II and running back through time until we get back to Edward II, King of England and Ireland from 1308 until his forced abdication in 1327. And it is in this montage that we get the clearest key to what Hill-Gibbins* is doing with this production.

Following the montage, that ominous Victorian-production curtain drops in behind the semi-circular throne room and quite “proper” lights snap up to reveal a sort-of-historically-faithful version of EII’s coronation. “Sort-of” because, alongside John Heffernan’s golden robed, be-crowned Edward II, his Queen Isabella (Vanessa Kirby), his brother (here sister) Kent (Kirsty Bushell), and young son Edward (Bettrys Jones) are dressed in an a-historical parade from high-heeled, trouser-suited Kent, through a kind of contemporary-take-on-medieval Isabella, to a young prince Edward (later III), dressed as a particularly obnoxious-looking prep-school boy from, well, pretty much any time between 1930 and now. Prep school uniforms don’t really change, do they? That’s the point of prep schools.

So, from this, and from the montage, I think we get that Hill-Gibbins’s intentions are to highlight the strange modernity that lurks in this totally alien spectacle. Something from 1308, written about in 1594, that can still be staged as something which speaks – at least in part – to contemporary fact. Indeed, it interests me that in his review Michael Billington claims “Hill-Gibbins’s production also overlooks the fact that Marlowe’s play is as much about class as sex: the real objection of Edward's barons to Gaveston is not that he is gay, but that he is a peasant”.

I’m not sure that this can be strictly true. I wondered the same thing, a bit, but then the reason I starting thinking about it at all was because I was noticing the way that everything all the Baron-characters ever objected to about Gaveston was his rank (he is variously “a stable-boy” and Edward’s “minion”, and so on). The idea of sexuality (such as I don’t think it even was then) isn’t raised at all. There’s occasionally the issue of fidelity, of which more later; and there’s stuff about “love” – mostly voiced either by Isabella or Edward; but everyone else in the play (bunch of nobles, mostly) a) just hate Gaveston because – at least here – he really is an annoying, arrogant prick, who delights in having a go at them, and b) because – again, here at least – they’re a bunch of war-mongering primitives, whose idea of statecraft begins and ends in yelling and threatening war. In this respect, also, we might conclude diplomacy has changed depressingly little in the intervening 700-odd years.

Perhaps a problem with raising the idea of the play’s modernity, however, is that while we can see what Hill-Gibbins is driving at with his admirably clear production, we also begin to see firstly how differently (and better) we would write a play about the subject now, and also the elements of J H-G’s staging of this very old play, which also feel surprisingly old fashioned. Put bluntly, there is *a lot* of shouting. A horrific amount. Thanks to some of the video stuff (oh, there’s video stuff – a closed-off back room where we can’t really see the actors except on video screens, á la, oh, Gob Squad, René Pollesch, Frank Castorf, Katie Mitchell and Thomas Ostermeier, to name the first five instances that popped into my head (video trailers for examples of eac h behind the names)), the actors are all miked. These can be turned on and off, of course, but it does seem as though only Kirby actually knows what a microphone does when it’s on. As a result, much of the play, is an epic shout-through version of that Beyond The Fringe sketch (“GET THEE TO GLOUCESTER, ESSEX. GO THEE TO WESSEX, EXETER. AND ALBANY TO SOMERSET...” All: “AYE” [hearty shouty and cheery] etc.).

Perhaps the employment of this arcane performance style, from which only the thoroughly modern Kirby emerges more-or-less unscathed, is part of H-G’s cunning postmodern plan. But, it’s a bloody hard pill to swallow, even if it is in the name of well-observed satire. Ironically, the other element of the acting which is hard going is John Heffernan’s undoubted ability to seem mild, sincere and pained. Partly, because it somehow doesn’t quite come off here, and partly because it seems to sit quite oddly with the play, with the character, with the character’s journey, and so on. It’s like the minor-key one-note counterpoint to all the major-key shouting going on. Wet with Gaveston, sulky with the Barons, mopey with his wife, and sad when he’s about to die. Interspersed with a bit of shouting when the plot needs moving along. But then, I don’t think in Heffernan’s case, the acting is the problem, per se. It seems to arise from trying to impose the psychological acting where there is no psychology.

But, yes, my basic thought is that, despite the deployment of the video-only back room, this is a totally British production, still divorced entirely from German or other European theatre traditions. The difference, I’d say, is of a really fundamental difference of approach. As I think I’ve said before elsewhere, that difference might best be characterised as a difference of dramaturgy. What Hill-Gibbins has done here, is take the play and use the play *as is* to make his point (which I take to be about the strange, twisted, bloodied shadow cast across Britain by the history of our Royal Family and class system (but then I would say that, wouldn’t I?)), whereas any German director worth their salt *remakes* or *attacks* the play to make their point. It’s a gross generalisation, but I’d say the reason this felt different to me is the lack of a strong dramaturgical hand (the production dramaturg(e) Zoë Svendsen's interview on the subject is instructive), and the way it uses the play to argue a point, rather than arguing with/against the play itself.  As such, I would say the productions successes and failures should be seen as British ones, rather than allowing ourselves to be distracted by some co-opted visual trappings.

What fascinated me, was that all the production’s greatest successes and failures all felt uniquely British, and I think that’s something we should recognise.

The successes – the wit in some of the early bits of video work. What was striking here was that one immediately remembers that we Brits can be Very Good At Telly. And sarcasm. And deadpan humour. And absurdity. As a nation, we’re also pretty good at goth music and thuggery. When the production mashed these elements together it was brilliant, and one just wished that they’d slashed the script to ribbons so that these briefest of sections could have been massively expanded to tell the story that way.

The failures – just all that bloody shouting of dull expository lines. It flattens characters. It gives actors nowhere to go – if they start out yelling, what can they do later when they’re even more pissed off? More yelling. Eugh.


*Look, I think we’ve had that conversation about “who does what?” enough times now for you to know that I’m aware that the central dramaturgical thrust of this production might not have originated with H-G but, I think, unless it came totally from the design team or his dramaturg(e), we’re going to have to assume it was his originally his idea.
Posted by Andrew Haydon at 15:57

On Billington's reference to class: just a hunch, but I wonder whether that is connected with Brecht's version of the play, which MB would have seen when the NT did it at the Old Vic in 1968 (the press photos, btw, often seem to be from the same production as this ... ).

Digressing further: Olivier said BB's EDWARD II was (a) the only Brecht he liked and (b) much better than the Marlowe. It seems from your review that J H-G's approach here has worked well. But, in general, my biggest beef with much theatre/opera in Germany is that directors, wanting to take a new approach to a given text, seldom care enough about the text to completely and fundamentally rewrite it / reshape it ...