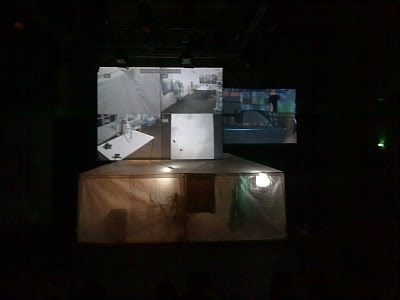 We Love Africa and Africa Loves Us (I promise, cf. my recent blogs, I actually don’t go looking for this stuff, it just finds me) is still a work in progress. Full performance is scheduled for 2012. In that spirit, this emphatically isn’t “a review”, it’s a report of what I saw and a description of what those things made me think and feel. And a few thoughts. I say this, not so much with an eye to the recent British kerfuffle about previews, as to a spirit of possible co-operation between amateur critics (in the best senses of both words) and makers (see also: the other night i dreamt the world had fallen over).

Of course, it helps that I really, really liked about 90% of We Love Africa... (WLAaALU), otherwise, I might just have kept my mouth shut, but this is a really exciting piece and I wanted to share what I’d seen with my reader.

The stage set-up of WLAaALU involves a pair of large projection screens hung over a kind of large, white tent/small marquee/gazebo (see murky photo, above). If you’ve seen Gob Squad’s Kitchen or stuff by René Pollesch you’ll know the deal – it’s performed live, but you never see the actors in-the-flesh. They’re behind an actual fourth wall, and there’s just the live-feed video projection to rely on (presumably at some point, someone will question whether this is “really theatre”, for my money it definitely is, especially when it’s done with the understanding that it’s breaking the "rules").

The interior of the marquee/gazebo is sparsely furnished with the sort of shelves you might find in a garage or shed, a potted palm, a map of Africa hung on the near wall and a white plastic table over which is hung one of the five cameras. Four (white) men enter and don scrubs. Slowly they lay out the array of surgical instruments familiar to us all from hospital dramas on television.

When this is done, one of the “surgeons”goes and fetches the object of their operation. It is a small doll. It is a small doll which has been painted brown. It is – I think crucially – not a doll which began life ethnically moulded as “black”, but a “white” (i.e. pink) one which has been painted. It still has blue eyes and those disturbingly heavy, adult eyelashes that some dolls have.

The doll is placed on the table and is patted, calmed and creepily stroked. It is at once ridiculous, horrible, incredibly loaded and deeply silly. The symbolism, let’s be honest, couldn’t be more simplistic, you’d think. But, somehow, thanks I think to the care and attention, and just sheer poker-faced seriousness of the actors, the performance not only contains both the crassness and the absurdity, but also seems to be using them.

The first operation involves the slow and meticulous filming of a scalpel being slowing lifted, ritualistically washed (– Oh yes. Rewind a bit. Before commencing, the four surgeons all hold hands and make as if to pray to their makeshift operating table. There’s already a heavy hint of The Spooky about proceedings. Now on with the show...) and then scratched tentatively at the join on the dolls leg, all this lovingly – too lovingly (no surprise that the group’s last show dealt with the imprisonment of Natascha Kampusch) – observed in extreme, somehow pervy, close-up. Bits of the brown paint are scratched away with the end of the knife before it is worked into the joint itself. And the leg is prised gently off. A flowery towel is immediately applied to this open doll-wound to staunch the flow of nothing at all.

There’s a brief pause and then the operation continues. Over the next, what? Ten? Fifteen? minutes, all the doll’s limbs are removed with increasingly less care. Again, I’m thinking this is so blunt as to be almost first-level-of-signification. But somehow the way it’s performed still manages to suggest something more.

The best bit, however, the most surprising thing, is when a pink wind-up hippo toy is placed on the table next to the increasingly limbless child. It buzzes like a dentists drill, and at the same time looks both sinister and ridiculous, as children’s toys do. Later there’s also a rattle shaped like a duck, which is waved in a way that suggests it holds a totemic power for the surgeons. At the same time, the level of conviction is only akin to that of a parent waving a favourite toy at their screaming progeny in the hope of mollifying them. It’s funny how within this sinister set-up everything seems to get ever more loaded with potential meaning.

Eventually the baby’s head is also removed, by that point wearing miniature green bunny ears, and is placed in some sort of shrine. It watches, then, as more and more dolls are brought out and butchered, first systematically, then just pointlessly. The surgeons don’t know what they’re doing. They can’t reassemble anything out of this mess of limbs before them. By this point the sci-fi/horror film soundtrack which has hitherto been underscoring the action builds into the sort of thing you might more reasonably expect as the opening track on a Swedish heavy metal album.

And then there’s the ten per cent with which I have issues. Time-wise it’s probably less than that. Anyway, the flyer we’ve been handed when we enter reads: “On the imagery of Africa and Africans in the drama of the helper and the helped. Humanitarian aid workers, just like the explorers of colonialist times, sacrifice their safe and comfortable family life for the adventure and for the cause – to bring light where darkness reigns. The Dark Continent must be penetrated, enlightened and saved!”

For my money, this analysis, even when couched in irony/sarcasm as it is, and even while it deconstructs the self-undermining attempts of white theatre makers to even critique their own culture’s incursions into Africa, doesn’t go nearly far enough. Moreover, to then show the scientists behaving almost as if possessed – three leave the tent while another screams curses at the map of Africa; now sounding like a cross between Throbbing Gristle and Whitehouse. It’s so crassly ineffective it makes one question the intricacies and febrile meanings one has been managing to construct for the past forty-five minutes or so.

Perhaps my bad for over-reading in the first place something that might not have been as clever, either a) as it would have liked or, b) as I would have liked. But I don’t think that’s it. There was much about the thing which reminded me of the brilliance of the Pythons, and they never knew how to finish a sketch either. Even their best. However, if this piece has a year before it opens, I would say, with some confidence, that the first 45 minutes or so are great. The ending, on the other hand, needs to be cut and entirely rethought. Oh, and if you’ve got the resources, get it performed by children. That would be amazing.

The whole already reads like this fairly forceful critique of “the West” as essentially childlike in their tendency to explore, sometimes destructively, while retaining total faith in their own essential rightness. But perhaps that again would be falling into the trap of being obvious. Not sure.

Still, the collision of the cringe-inducing, almost total unacceptability of the imagery (at least to my British eyes), and the knowingness behind that is startling. The knowingness and handling just needs to be that bit more fine-tuned, though, until it really does know, rather than aiming in a hopeful direction and striking out too quickly.