Having read the reviews of Greenland and The Heretic, I’d just like to remind everyone of this piece which I wrote for the Guardian on 30th December 2009:

“Perhaps it's just me, but particularly in Edinburgh and afterwards, the polar bear seems to have become a subliminal byword for impending ecological catastrophe. Even when a piece has got nothing to do with the environment, polar bears still seem to crop up. And it's one of those things that once you've noticed it, you can't stop. Notable occurrences include Lucy Foster's O My Green Soap Box and Im Pelz”

I would draw polar bear fans’ attention in particular to Chris Goode’s comment beneath the piece wondering if “the polar bear in [Anthony Neilson’s play The Wonderful World of...] Dissocia is the ur-polar bear in respect of the trend [I’d] identified.”: 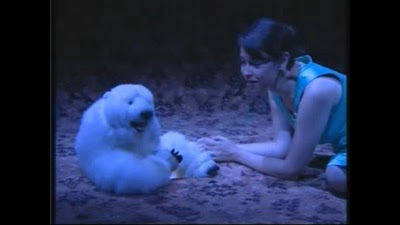 (Wonderful World of Dissocia screen cap from a promo video on YouTube)
– and then to the representative of ursus maritimus handled by Juliet Stevenson in The Heretic: 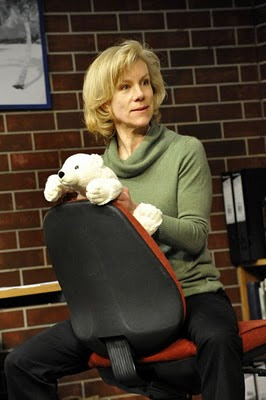 I’m currently mulling over writing a piece about theatre which tackles the subject of climate change myself. Not having seen either Greenland or The Heretic (or Water, or If There is I Haven’t Found It Yet, or The Contingency Plan for that matter), I reckon I’m in an ideal position to do so (I did see Earthquakes in London, though).

In the mean time, anyone who is genuinely interested in the subject and how coverage of it has evolved in the last few years should go and look at Chris Wilkinson’s Guardian blog archive. If we really want to talk about ‘ahead of the game’, it’s worth noting that the first piece he ever wrote for the Guardian Theatre Blog, back in Sept 2007 asks when the climate change was going to start being taken seriously by theatres (2011, as it turns out), and it’s clearly been an abiding concern of his work since (most notably: May 2008, Edinburgh 2008, Jan 2009 and June 2010).

This sort of work written by someone who has an informed, long-standing interest in the subject is a useful corrective to the sort of glib reporting most recently offered by the New York Times which, while paying a gratifying amount of attention to polar bears (“Both plays resort to polar bears. Greenland has two actors in a polar bear suit lumbering onto the stage at one point (deemed by some critics as the play's high point), while The Heretic uses a line drawing of one standing on the tip of an iceberg as the motif on its programs.” – um, yes. It’s also got Juliet Stevenson holding a cuddly one...), does rather seem to have been written by someone *pretending* to have seen both plays. 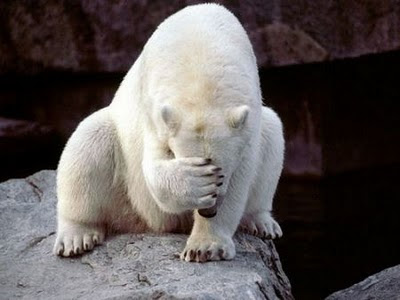 Anyway... I should go write something proper now.

In the mean time, I can’t remember if I’ve posted this song before (apols if I have), but, on topic:
(and, no, they’re Swiss, actually; since you asked)
Or, if you prefer: