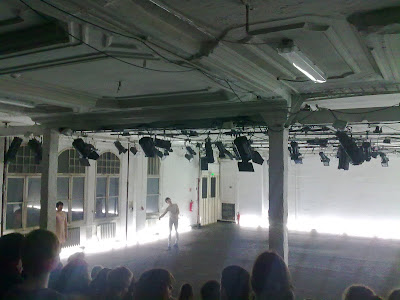 If, after something of a false start with Psych0, Virus Casino provided an amiable warm-up, Sebastian Mattias’s Tremor pretty much single-handedly justified the cost of entry.
Tremor is an exquisitely made piece of contemporary dance. Annoyingly, my vocabulary for discussing contemporary dance is more limited than my German (which, alas, still says nothing for my German), so apologies in advance for the limited co-ordinates used to map it.

Sophiensæle’s Hochzeitsaal is a bright, white attic room. Kind of the same dimensions as a scaled down Barbican Pit, or maybe (at a push) a square Bush. For Tremors, it has been lit with 27 painfully bright strip lights around the edge of the space’s floor. Mid-stage right, centre-stage front and on the far left of the seating rake, at the back, are three large speakers, each with a snare drum carefully perched on top.

The piece is for three performers, two men and a woman (Mathias, Lisanne Goodhue and Isaac Spencer). Each is carefully dressed in fashionably cut muted colours. There’s even attention paid to their differently coloured socks. In short, before it’s even started, the whole thing looks superbly thought through: minimal, but not blank or bleak. The three performers have been twitching and jerking a bit as the audience filed in. Once we’re settled, the soundtrack is allowed to bring them to life.

It is separate, concentrated and detailed. Each of the three performers begins a developing cycle of their own movements, initially suggesting three different states. One of the men (Spencer?), stuck on the floor, dressed in a mustard t-shirt and beige(?) PVC(?) shorts(?), uses his arms to wrestle his apparently spastic legs. While Mathias (?), dressing in light grey sleeveless t-shirt and light grey, tight jeans, struggles with a torso intent on curving the opposite direction to hips and legs. Goodhue – a fitted pink dress – stuck against one wall (and, from where I was sitting, pretty much behind-a-pillar – beautiful tho’ it be, Hochzeitsaal has a couple of sightlines issues), struggles with her arms.

The soundtrack similarly stutters and clicks, building with painful deliberation toward a promised crescendo which never quite arrives. The sonic architecture here is quite astonishing. Yes, it’s recorded, which always has the effect of making the movements feel slightly remote-controlled, but thanks to the presence of the snare drums in the room there’s also a tiny unpredictable live element as they rattle more and more urgently as the sound shakes the speakers on which they rest.

The combination of the fluorescent lighting, beautifully engineered soundscape and the painstaking movements gives the initial impression that the piece is somehow also emotionally cold and remote. It’s clearly intelligent, but I do wonder if under red lighting it would look even faintly intellectual. Funny how a lighting state can control how one *reads*. That this thought occurred to me not long into the show, suggests that there’s something in the movement that disputes it. Certainly this is a long way from the gutsy passion displayed by something like Pina Bausch’s Café Müller (I only saw Pina the night before, so it was much on my mind, it’s a fairly crude compassion, really – although Spencer’s early struggles with his legs certainly recalled a Bausch routine). But there’s also a fluidity along with the deliberation. All three performers are incredibly talented and precise; at all times entirely focused on their cycles of movement, almost living, introvertedly, *inside* these strange sequences.

The piece as a whole consists of (I think) six of these cycles. Each accompanied by a gradually building noisescape. The cycles are separated by punctured silences accompanied by sporadic jerks. With each cycle running at roughly eight minutes, by the end of cycle four, with the intricacy and “rules” firmly established, part of me wanted to see a cycle broken, and perhaps at least one crescendo actually achieved – perhaps see the distance between the performers finally snapped and to see one rush across the space and leap into the arms of another to the long-promised crash of drums. It never comes. But this almost perverse, infinitely deferred gratification somehow manages to keep the piece fascinating and hopeful long beyond the point where by rights it should start to drag.

As Tremors is co-produced by Tanzplan, Hamburg, and Dampfzentrale, Bern, it’s unlikely that Mathias needs my inexpert praise, but this is definitely a choreographer to watch. 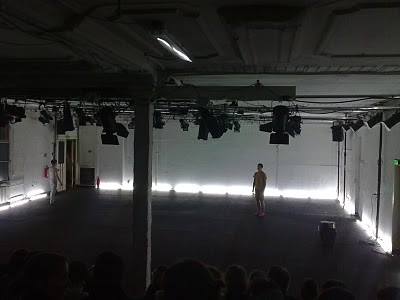 Hello,
I am Jassem Hindi, the composer of the sound piece / installation with the snare drums. Thank you for your kind words. I liked your insight on the work.
Hope to see you for our next piece this coming season.
Jassem