Under the paving stones, the beach 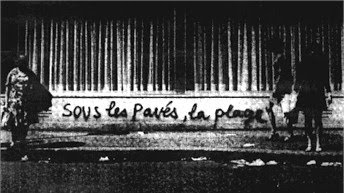 I spent a good deal of yesterday afternoon sitting in a café not getting very far in writing a piece about British theatre criticism. So I gave up, went home and read a book.

At the moment I’m alternating between Stefan Aust’s Baader Meinhof Komplex (a remarkably good bit of journalism on which the catastrophic film of the same name is based) and Lipstick Traces, Greil Marcus’s book about the Sex Pistols, which draws on everything from Guy Debord, the situationists to Theodor Adorno in one of the most page-turning bits of cultural history I’ve ever read.

As it turns out, the latter offers plenty that resonated. So here, in lieu of an actual essay on British theatre criticism, theatre-making and the blogosphere, are a bunch of quotes and scans from Lipstick Traces. Think of it as a series of reflections and provocations.

Early on Marcus quotes from Margaret Drabble’s The Ice Age (not a novel I’d previously heard of):

“All over the nation, families who had listened to the news looked at one another and said, “Goodness me,” or “Whatever next,” or “I give up,” or “Well, fuck that,” before embarking on an evening’s viewing of colour television, or a large hot meal, or a trip to the pub, or a choral society evening. All over the country, people blamed other people for the things that were going wrong – the trades unions, the present government, the miners, the car workers, the seamen, the Arabs, the Irish, their own husbands, their own wives, their own idle, good-for-nothing offspring, comprehensive education. Nobody knew whose fault it really was, but most people managed to complain fairly forcefully about somebody; only a few were stunned into honourable silence. Those who had been complaining for twenty years about the negligible rise in the cost of living did not, of course, have the grace to wish they had saved their breath to cool their porridge, because once a complainer always a complainer, so those who had complained most when there was nothing to complain about were having a really wonderful time now.”


A few pages later, Marcus is quoting the banner Malcolm McLaren hoisted over the last stages of the New York Dolls: “WHAT ARE THE POLITICS OF BOREDOM?” and compares it to the old Situationist slogan: “Boredom is always counterrevolutionary.” He observes: “– the line was typical of the situationist style, of its voice, a blindside paradox of dead rhetoric and ordinary language floated just this side of non-sequiteur, the declarative statement turning into a question as soon as you heard it; what does it mean? You already know, the situationists had answered: all you lack is the consciousness of what you know.” (p.49-50)


On punk’s sudden, massive proliferation (see also: Chris Goode’s recent reminder of Scritti Politi’s DIY call-to-arms): “Over the next few years, far more than fifteen thousand groups of people made records. They made a blind bet that someone might be interested in they sounded like or what they had to say, that they themselves might be interested. Some were bent on fame and money, and some were not; some wanted most of all a chance to announce themselves, or anyway to change the world.” (p.65)


Four pages later he’s quoting Benjamin: ‘“The art of the critic in a nutshell,” Walter Benjamin wrote in 1925-26 in One-Way Street: “to coin slogans without betraying ideas. The slogans of an inadequate criticism peddle ideas to fashion.”’ (p.69)


“People cut records not so much on the off-chance that they would hit, but to join in: to say “I’m here” or “I hate you” or “I have a big cock” or “I have no cock.” Teenagers discovered the thrill of shouting “FIRE” in a crowded theater – or even in an empty theater.” (p.76 – Marcus, not Benjamin now)


Lester Bangs: “The punk stance is riddled with self-hate, which is always reflexive, and any time you conclude that life stinks and the human race mostly amounts to a pile of shit, you’ve got the perfect breeding ground for fascism.” (p.80)


The book also shares this four-page situationist-inspired leaflet from London at the beginning of the 1980s, which reminded me of London's ongoing demonstrations: 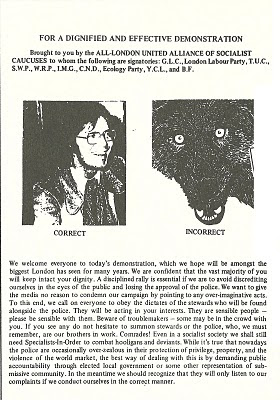 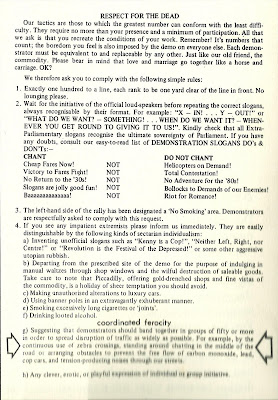 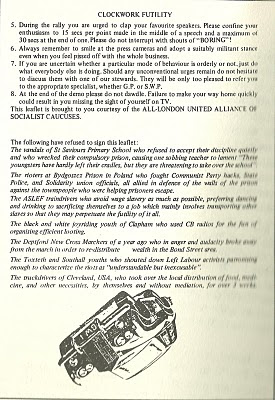 Hope that helped in some way.
Posted by Andrew Haydon at 23:41

I used Lipstick Traces for my thesis last year (while reading Ulrike Meinhof's columns (!), which I found depressingly insightful), and it pleases me to no end that someone else I know is reading it. I loved plowing through it slowly, always unsure of what its point was (I took it to be an alternative history of the 20th century indeed, not of Sex Pistols), until it slowly got to it by the end.

What's most interesting, it seems to me that its ideas about the world (pursuit of ecstasy, ludic rebellion) have just become obsolete. We have just entered some other moment in time, exemplified more by the circular uneventfulness of 500 Days of Summer than by the revolutionary potential of Shoujo Kakumei Utena (to take two examples from pop culture). Although I imagine that, as the member of the generation before mine, you wouldn't know about Utena...?