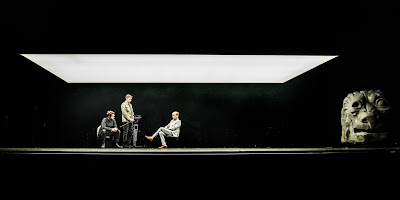 Polish director Łukasz Twarkowski’s production of Lokis – a Very Free adaptation of Prosper “Carmen” Mérimée’s horror story of the same name – is about the most impressive use of video that I’ve ever seen on stage. The whole thing lasts around three hours (plus interval) and for long stretches is almost hypnotic in the way it operates. The plot of the original is apparently some insane French confection (which *was* originally set in Lithuania; hence the interest, presumably) about a woman who is attacked by a bear, and nine months later gives birth to a son, who in turn goes on to kill his bride on their wedding day. Or something.

Twarkowski, and writer Anka Herbut, have taken this original story, added a much more recent (true?) story of a French film star who was also murdered her husband after she was filming in Vilnius, and turned the whole thing into a compelling, horrifying, hallucinogenic meditation on violence against women. There might even be a third murder. If I’m honest, details/clarity (at least when here coupled with surtitles) weren’t the piece’s strongest point. But in the same way as “please explain the plot of Inland Empire” isn’t really a thing, neither is it here. Instead of linear narrative clarity, we instead have this nightmarish journey into the heart of these murders, and into the minds of these men who murder women. Towards the end, there’s even this attempt to try to reconstruct the thoughts of a man about to murder his partner – an attempt deliberately doomed to failure. Of course. But the piece itself reflects on and revolves around this unknowability. [I should add/reassure that it absolutely doesn’t glorify violence against women, nor needlessly fetishise it for entertainment. (There is one shot of a woman – presumably dead – lying naked on a bed, which could have been lost, but maybe even this is a comment on that trope, rather than an example of it).]

What’s really compelling here, however, is the stagecraft. The thing opens (a bit like Dead Centre’s Lippy) with “the director,” and eventually his whole team, talking about their rationales for making the piece. While interesting in its own right, this also sets up the audience perfectly and effortlessly with a way to approach watching it. There then follows one of the best bits of lighting-design-as-performance that I’ve seen. Again, reminiscent of the David Lynch aesthetic, but at the same time completely theatrical. From this, the thing starts to move into a version of the Katie Mitchell camera show, as if reimagined by the Frank Castorf/Gob Squad camera show (as it were). I don’t think it’s an exaggeration to say that it’s the best video work I’ve ever seen on stage. If anything, it’s more like Sebastian Schipper’s film Victoria than anything you’re used to seeing on stage: there’s both the fluidity and anarchy of Castorf but with the eye for a decent shot of Mitchell’s video collaborators, but without the static painterliness.

As it happens, a fascinating thing happened the night I saw Lokis: about twenty minutes from then end, the live-feed went completely dead. The entire rest of everything continued, and someone came out into the middle of the stage – as if totally intentional – and told a strange story/joke about a rabbit in a wood(?). Or something. Then the scene that had cut out started again. Given the rest of the show, it was genuinely impossible to say for sure whether it was a real mistake, a slightly odd dramaturgical decision, or actually great. I’d have been happy with any option as the “correct” explanation.

Similarly, while it’s not a piece which really draws attention to its actors (the style and anti-narrative really militate against it), you do eventually notice just how great they are – just really subtle, understated, naturalistic-but-not kind of acting that communicates everything you need to know without somehow making communication the point.

So, yes: while in places at time-of-watching it felt slightly “over-long,” on reflection, I don’t think I’ve have wanted them to cut anything to “streamline” it. I was never bored, and it was great just to be able to sit back and have the senses assaulted by this maelstrom of smoke and strobes and music and video, executed with rare panache, exploring something curdled at the heart of humanity. 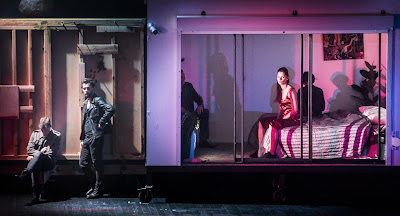