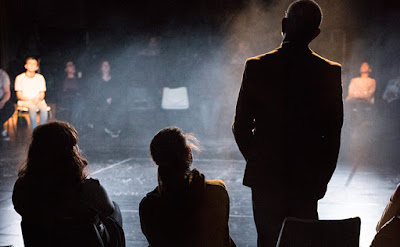 What to say about American playwright Thornton Wilder’s 1938 play Our Town? It’s apparently the most performed, most loved, most well-known play in America. And, well, just look at America.

On a superficial level, it’s very nice. In three meta-theatrical acts, the audience is genially walked through birth, marriage and death – all taking place in a New Hampshire town (population 2,000-ish) – by a folksy “Stage Manager” character.

On the next level down, it’s less nice. Sure, Wilder notes the almost mysterious “disappearance” of the native Americans*, but more than that – possibly due to the state America’s in now** – you become aware of the way that division is hardwired into the place. Here, it’s the Polish Catholics on the other side of the railroad tracks, of whom we see nothing, and of whom we hear only what our on-stage WASPs occasionally deign to mention. So the claim of “Our” becomes pretty pointed pretty quickly. Although, as I say, it’s a such a genial, “universalist” play, that you pretty much let that point go. (Or at least, I – a White Anglo-Saxon Protestant – let it go. The Catholics *are* always “over there,” as far as I’m concerned, so why would I notice or particularly care when a play confirms this impression to me?)

And, of course, this could well be Wilder’s intent. There’s a very fine essay in the programme by Steve Bottoms of Manchester Uni, which quotes Edward Albee brilliantly describing it as “a real tough play” which “everybody performs like it was a fucking Christmas card.” (Although I’ve never seen a “Christmas card” production, I can well imagine it – just like Twin Peaks, as soon as David Lynch and Mark Frost stepped away, turned into a succession of fucking idiots putting kooky things on screen, because that’s what they thought it was about.)

These textual levels are, of course, complicated by the fact that this is a play-script, and so there’s also a production. And, as is customary with the Royal Exchange, the production is about as utopian, inclusive, and non-divisive as you could wish for. Which is lovely. Of course. But it also makes things *quite complicated*. For example, let’s take the relatively simple issue of the accents used here: Youssef Kerkour as the Stage Manager speaks with an American accent (his own?). Most of the rest of the cast speak with various Manchester accents (probably mostly their own)***. What does this really say? Sure, I think I can read what’s intended: a nod to the play’s American heritage, but with the nitty-gritty transposed to the here and now, but with all the words, idioms, events and traditions still intact. With an overall message that backs up one possible meaning of the play: that people the world over aren’t so different. Which is both comforting, and probably a tool of American imperialism. (I mean, I don’t suppose people are so different either, but it’s telling that I’ve seen several productions of this play, suggesting we’re all like people in New Hampshire, but no plays suggesting that we’re all like people in Kinshasa or Tehran or Pyongyang.****)

The production itself is very nice. It’s a good production of a play that’s still interesting and has lots of good things in it. Frankcoms’s direction is good, the cast are very good, and Fly Davies’s set suddenly includes a theatrical coup which was (for once) completely unexpected, which I didn’t see coming, which worked brilliantly, and which also introduced a level of problematic Sarah Kane kitsch***** that – and I say this admiringly – added about 100 extra levels of difficulty to the whole. Max and Ben Ringham’s sound design was great, as was Jack Knowles’s lighting – particularly in Act One, where lights are shone through the frosted glass walls of the Exchange’s weird pod-theatre from outside it to create the sunrise...

If I’ve a reservation, it’s that I wonder if last night they didn’t slightly throw away the ending. The Third Act, after the interval, felt to me like it could have supported more silences, more pauses, more slowness; the audience felt primed for that, and could definitely have lasted longer than they were asked to. But that’s an entirely subjective feeling. Conversely, I also appreciated the unsentimental performance of something is that still, to me, unarguably sentimental.

But, yeah, it all works well. It’s modern (for England). It’s about as progressive as it can be (while remaining faithful to the script). The cast seem lovely. It’s a credit to Manchester. Etc. Etc.

* best joke ever written about America: “America sure is having some bad luck; it’s almost like it was built on an ancient Indian burial ground.”

** Or, more accurately: the suddenly-made-explicit/visible state that America has always been in.

*** Everyone in New York director David Cromer’s English remount of Our Town at the Almeida in 2014 spoke with their own accents too, so no prizes for Shock of the New here, but thank Christ anyway. I think – particularly after Benedict Andrews’s ATROCIOUS Cat On A Hot Tin Roof – fake American accents should be banned for at least a decade.

**** While I’m in complete support of equal casting rights, I do wonder again about actors of colour effectively neutralising the play’s potentially problematic all-white origins. Again, there’s no simple answer to this. It certainly wouldn’t be any better to stage it with an all-white cast just to show how bad that looked. (Not least because, as per the Catholics above, far too many (white) people probably just wouldn’t mind/care/notice.) But, I dunno, on some level, just making it nicer without acknowledging the problems seems too easy. Similarly, while a year ago, Dominic Cavendish made himself no friends by questioning the logic of casting Sharon Duncan-Brewster as Maxine Peake’s sister, part of me does wonder if the “colour-blind” casting-logic here just winds up inadvertently signalling “all these characters are actually white”.
[No animosity intended here. I just wonder if there is a way that theatre can do any better than it’s currently doing. And whether there’s any way at all of redeeming old American drama.]