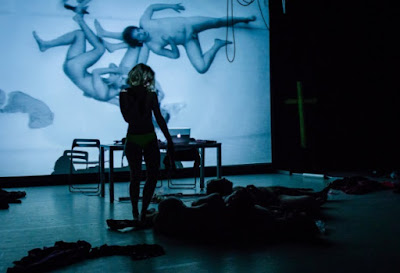 I was quite taken with Artūras Areima’s production of Unter Eis at the Edinburgh Fringe last year, much to the surprise of several Lithuanian colleagues, who were several shades more sceptical about the extent of Areima’s talent. With Antichrist – entirely devised, as far as I can make out; possibly based loosely on Friedrich Nietzsche’s 1895 book of the same name (definitely zip to do with the Lars von Trier film) – I began to see from whence their scepticism came.

Antichrist is, to put it simply, a series a shock gestures, mindless sloganeering, nudity and excess. It *might* be about various things, including the result of the American election, geo-politics, Russia, and maybe The Internet. I think it also cleaves pretty close to Nietzsche’s rejection of Christian virtues in his daft quest for proto-fascist perfection. It’s not remotely clear whether Areima envisages Nietzsche as the originator of our current problems, or the best tool with which to combat them. It feels very much like the work of a 15-year-old boy who’s been saturated with “shock” images from MTV, CNN, etc. but wants to outrage their theatre studies teacher (here the teacher could be left- or right- wing. Either way they’d find plenty to complain about).

Perhaps, then, the most interesting thing about this piece is that it actually ends up feeling rather like the perfect theatrical expression of something like 4chan. A completely random assemblage, with absolutely no meaningful political allegiances, prepared to make whatever gesture will be most “shocking”. Antichrist “says” nothing, and we’re maybe reminded of that early Laibach interview in socialist Yugoslavia, where they repeatedly refused to deny that they were fascists. In this respect, I suppose I found it quite useful, insofar as: there’s always something quite good about having your assumptions about what it’s “ok” to put on stage challenged. I mean, sure, on a technical level the format of scene/total energy loss/scene/total energy loss/etc. was pretty witless, despite the four performers’ obvious commitment. But actually trying to criticise it on that score might be missing the point entirely. Maybe, like punk, it’s technically bad on purpose, because technical proficiency is bourgeois, or something. (Tbh, it’s very hard to know who or what the targets were, or who – if anyone – is actually meant to be being “shocked,” rather than a usual international theatre audience registering that the piece is using all the tropes of “shocking” to deliver something that, if it is shocking at all, is mostly shocking on the level of “blimey, I didn’t realise anyone was still making this show!”)

There are some “nice” moments in it, but – call me old and out-of-touch – I would have been quite interested to have seen what could have been achieved if there’d been a dramaturg and a discernible point. Two hours is quite a long time to watch people just throwing shit at a wall to see what sticks.

"Two hours is quite a long time to watch people just throwing shit at a wall to see what sticks".
Nailed it!