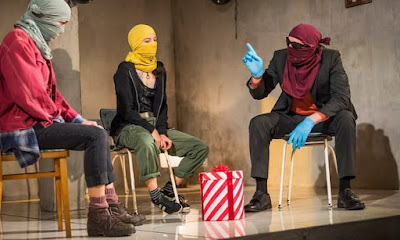 Note to self: next time, maybe don’t go to an English “International” offering when you’ve just come back from abroad. It only makes you cross.

By pretty much any available measure, B is not good. Or rather, this entirely divorced-from-context production of Guillermo Calderón’s B, translated by William Gregory, directed by Sam Pritchard, designed by Chloe Lamford, lit by Lizzie Powell, and performed by Sarah Niles, Danusia Samal, Aimée-Ffion Edwards and Paul Kaye, isn’t very good.

The set-up is fine: two deadpan teenagers are planning a terrorist attack. In Pritchard’s production it comes across as Harold Pinter’s Four Lions meets Baader-Meinhof Komplex (with additional material by Eugene Ionesco and Joe Orton). For about half an hour, it’s quite passable. For the next half an hour, much less so. And then until the denouement (including an explosion appallingly rendered as sixth-form expressionism) it’s pretty much dead.

I can’t remember the last time I saw a play so thoroughly defeat a director, much less the last time I saw such a shrug of a production. If you don’t have an idea, don’t direct the play. It’s as simple as that. There’s literally no point in young directors being made to stage unperformable scripts, while being forced to “serve” them. And, given Pritchard’s outstanding Pygmalion, it just makes the Royal Court look like a place where talented directors are neutered (see also, Michael Longhurst’s barely-passable Linda). (In mitigation, I should note that B is playing in rep./double bill with Victory Condition, so has almost certainly also been hamstrung by that.)

Re: the script – I’m sure it’s perfectly good in Spanish, so maybe perform it in Spanish, and let us do the work with the surtitles? Because having English people flatly deadpan their way through a bunch of unsayable sentences about how someone is someone else’s white horse or something doesn’t work one bit. I daresay even some Chilean actors could have made a bit more interpretative sense of it, but, dear God, not native Englishers doing their most deadpan accent thing. Not that.

Ach. There’s not much more to say, really. There is interesting stuff to think about in the play, but the production doesn’t incline you to do so. Edwards is quite funny and good as one of the terrorettes and Paul Kaye is actually very good indeed as their enigmatic bomb-maker. But, y’know, theatre’s a bigger artform than that, so the presence of some functioning parts in a malfunctioning whole isn’t even slightly enough.