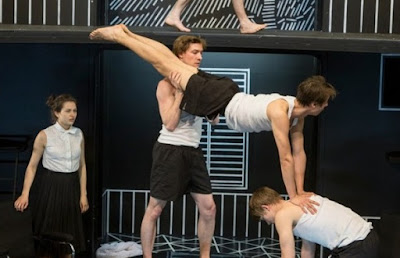 Do plays have sizes? I don’t know about you, but for some reason, if anyone mentions Brecht’s Life of Galileo, I always think of it being “an Olivier play” (the Olivier is the brutalist, Greek-amphitheatre-style largest stage in GB’s National Theatre). [Don’t get me wrong, this isn’t some fit of nationalist fervour; I imagine it being a *terrible* production. Probably Simon Russell-Beale fussing around ACTING for three and a half hours...] As such, my first surprise at this production was being taken to a tiny room on the fifth floor of Budapest’s National Theatre (we need to talk about this building some time, remind me) to see the piece.

We’re talking about something the size of one of those studios the BAC used to have. Studio C, it used to be called. Maybe 100 people tops; small, end-on, black box, small audience rostrum. Low-ish ceiling...

Here the small-ish stage is taken up with a cramped black multi-level black and white set (design – Ambrus Mária – we know Hungarian names have the surname first, yes?). It’s a kind of miniature version of the inner yard of a tenement building. Four floors of walkways represented in a set about the size of a spare bedroom, sketched out in white paint and tape on black boards (Designer – Ambrus Mária).

The next surprise is director Sándor Zsótér’s chosen performance style. The most immediate and accurate comparison is to the No99 sections of Three Kingdoms. Four or five young men in shorts and vests burst through various doors and windows and perform athletic feats and acrobatics. They become living sculptures, Renaissance tableaux, and Galileo’s telescope (see above), as well as the myriad characters who appear in the story.

What was also incredibly refreshing was how far from classically Brechtian it was. This felt like a complete embrace of an entirely different aesthetic, which made the play its own. Now, while I know the play a bit, this being a Hungarian production in Hungary, the production was not surtitled, and apparently it also deviates/d quite a bit from the original. I’m not sure how much of this was readily discernible from just the visual aspects. It’s shorter, certainly, than the “full-text” (2hrs here). There was also a woman in a red body-stocking (playing the Pope – which I did guess), and a person (possibly different people at different times) floating about in a space-suit (playing the inquisitor – which I didn’t guess).

The best “intervention”, however, was having old Galileo played by an elderly, and apparently very famous actress. Actually, you could kind of *tell* she was famous, even before the final moments of the production played the final moments of a film she was in years ago as she walked into the projected image of her younger self.

[Something not-fully-related that the piece made me think about was the question of aesthetics in theatre. This piece clearly had a stripped-back, not “Poor Theatre” aesthetic, exactly, but not one that signalled wild opulence either. And it made me think again about the extent to which we’ve become really used to something that we might want to think about calling “Rich Theatre” in Britain. I mean, I bow to no one in my admiration for Cleansed, I thought it was glorious and near-perfect, but, my God, it’s not something to which students – for example – can practically aspire. But, on the other hand, how much more expensive is a set like Cleansed than this one? I’m genuinely fascinated to know (disparities in labour costs and materials between UK and HU. notwithstanding). Isn’t it more the case here, in a show made for the Hungarian National Theatre – albeit admittedly for a smaller room, by a less internationally well-known director, is at least partly to do with choice. This thought becomes more pronounced when you consider that – surely – a lighting design is a lighting design is a lighting design. Like, one gel costs much the same as another, so setting a lot of the lights to a kind of “neutral”, “cold”, deliberately glare-y, artificial lighting effect isn’t *actually* cheaper. It’s just a design decision to make something look cheap. Which is interesting (perhaps only to me, but...).]

Here I hand over to some notes supplied by a Hungarian critic friend largely just to illuminate the remaining details – questions that I could formulate having seen the performance, but not answer:

All the actors played many roles, their function (man of power, student etc) is important to Zsótér, not the character's name

The text is perfectly cut, it was always obvious who we see and when (Dramaturg – Ungár Júlia).

The university students in vest and shorts formed a telescope many times: when G. looked into the telescope, actually he was looking to the eyes of a young man...

About the famous older actress: she is a living legend, but in very bad health. A few years ago she fell into coma and she used to say she already died once. I think all the audience and even the director know that this is her last role on stage. The final video sequence is from a film made by her husband (who died a few years ago), which she starred in with Zsótér, the director of this show. Other members of the cast are also related to each other and to the director. Of course you don’t have to know all this stuff, but you can see that the show is very personal and has an intimate context...

And there we have it, I think. A strange but effective version of a vintage play, re-made here as something altogether more personal and charming, in a way that communicates this well beyond a still absolute language-barrier. Remarkable. 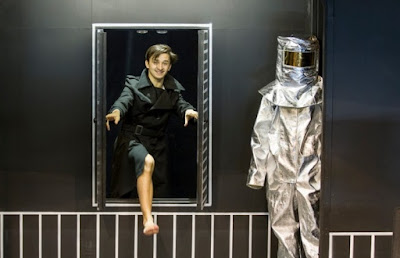