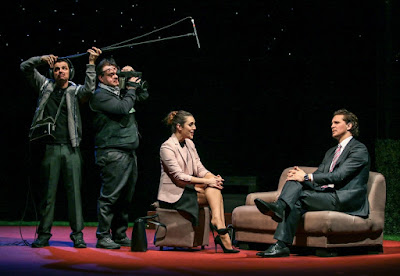 Ok, so here’s a properly fascinating thing. To review The Champion (A Bajnok) properly, I should first talk about the show I *saw*, and then go back through it adding context and understanding.

The basic news story about The Champion is that one of Hungary’s most celebrated indie writer-directors, Béla Pinter, has written a new libretto for – well, essentially, Puccini’s Il Tabarro, but with ‘Nessun Dorma’ and ‘Un Bel di Vedremo’ et al. also thrown in for greatest hits value. The new libretto concerns a “recent Hungarian tabloid scandal” involving a mayor of some provincial Hungarian town who is a member of the more-or-less entirely disgusting, right-wing, ruling majority party, Fidesz.

The action of the play is as follows: Bloke (Mayor) wins election, comes home, has a drink, can’t be arsed with TV interviewers, TV interviewers also get pissed, everyone goes off. Mayor’s wife seems to be having an affair. Now, without the language (I read a bit of the script before, but most after), it seemed ambiguous to me whether she was having this affair with a man played by a woman (cf. Nero in Monteverdi’s L’Incoronazione di Poppea, perhaps just because of the way that the libretto from the Puccini had been reworked, right?) or a woman playing a (rather unconvincing) female love interest for the mayor’s wife (Adél Jordán does *seem* to have been instructed to do some pretty macho acting...).

The design/set is minimal, a teeny bit arty (there are a thousand twinkling fairy-light stars), and incredibly functional. There’s a revolve on which a sofa and armchair turn round and round, and around this is a green astroturf garden, with some garden furniture downstage right (and the pianist accompanying the piece – who is outstanding – d/s left). The performances are strong, if occasionally broad. The singing, likewise, is tuneful if not always “fine”. (But, y’know, Puccini, right?) It is a strong show. It is a comedy. The audience are laughing lots. The reception is incredibly warm. Even by the absurd standards of Eastern European applause (generally about five minutes) this seemed particularly enthusiastic.

And, y’know, it does have some genuinely funny bits. There’s a recurring motif of a bear wandering on, as the mayor watches a nature programme on TV, and, once he’s taken cocaine (the mayor not the bear), the bear’s activity becomes markedly more frenetic, bashing a plastic salmon on a plastic rock in an imaginary stream. So, yeah. Job done. Happy punters, happy Western theatre critic. This is an amazing, anti-governmental, popular success, *AND IT’S NOMINALLY AN OPERA TOO*! Trebles all round! This is precisely the sort of thing that Richard Bean could/should knock up for Nick Hytner’s New Not-The-NT. (I think just to compound this sense of a massive popular political satire, I saw the thing only a couple of days after the NT’s The Suicide opened in GB, to *some consternation*).

Which is where this review would end without context. However, some *actual facts* rather get in the way of it being such an open and shut case. As it turns out, the reason for the tabloid “scandal” around this small-town mayor is that his wife had an affair with a woman. Now, obviously this is splendid if you count it as one in the eye for a member of a party that is about as homophobic as it can be without crossing an EU guidelines. What’s less good is treating the entire idea of same-sex relationships as inherently comic. Which I’m not sure the production avoids (even if it’s not deliberate). But this appeared to be a nuance with which the audience didn’t seem especially concerned.

Occasionally I get told off for importing “Western Values” into Eastern Europe in my assessment of the work. But, well, homophobia is homophobia is homophobia. Allowing your production to actively court it for comic effect is inexcusable. I completely understand that making art in an ex-totalitarian, now ultra-conservative, and very right-wing country must be intensely difficult. And that the compromises that artists have to make must be huge. But, if you’re already making a work that’s had the theatre threatened with lawsuits and funding withdrawal, why then allow such a crass element to exist alongside in the same troublesome and subversive work? (But perhaps I’m over-reading this. The relationship wasn’t “funny”, per se; but neither was it credible...)

Once again, this does also make me acutely aware of the extent to which the British model of criticism does/can often function as its own kind of political censor: that we criticise work hardest for failing to meet progressive standards. And I do find this tendency absolutely fascinating. But I don’t think I disagree with it. I think it’s a vital part of the conversation we (critics and audiences) have with the work and with its makers.

Moreover, in this instance, it hands an obvious weapon to the right. This paragraph below is from a column offering scattergun criticism of the piece, but the argument they make here is striking:

“Also, what’s up with the careless homophobia towards the lesbian Olympic champion? Did the required tolerance of the liberals suddenly disappear? Is it now ok to use homosexuality as a political weapon? What is considered a pride for the left must be the shame of the right? It is kind of a suicidal tactic, isn’t it?”

Well, yes. Too right it’s a suicidal tactic. And if it takes a right-wing, pro-Fidesz columnist to point it out... Well, you do the maths. Of course, hypocrisy is a brilliant tool to take down this government, but I’m not fully sure that a right-wing politian’s *wife*’s affair (rumoured) actually makes the husband a hypocrite. One might uncharitably enjoy his discomfort, but, that’s hardly scoring the much-needed political points. Make operas and dramas about their actual corruption, and their godawful policies. Leave the state of their marriages in the tabloids where they belong. 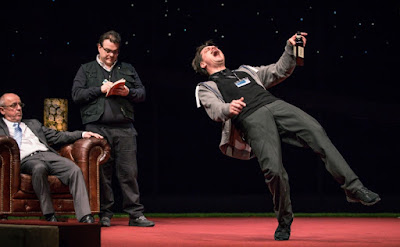