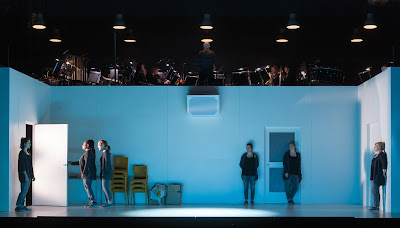 This ROH world première of Philip Venables’s 4.48 Psychosis is a game of two concurrent halves. What? Well, there’s the music and there’s the fucking staging.

The music is interesting; a lot of it is astonishing.

Ted Huffman’s production, on the other hand, is shockingly, shockingly bad. I mean: unbelievably inept. Grossly, offensively terrible. The temptation is to reach for similies – the dramatic work of schoolchildren springs to mind – but, fuck me, that’s insulting to the fine imaginative skills and good faith of schoolchildren. To call it unimaginative would be a wicked understatement. It’s like an imaginative black hole. Not only devoid of imagination, but also sucking imagination out of the surrounding space. You can’t imagine how something so resoundingly dreadful was allowed to happen on the stage, and you stop being able to imagine anything else happening instead; your eyes inexorably drawn back to the aching nothingness...

But hyperbole solves nothing. We need precision. What happens is this:

The orchestra are placed on a raised platform at the rear of the stage. The front half of the stage is bounded by room-height white walls. There are three doors – one in each wall. The door in the rear wall has opaque glass in it. Light sometimes shines through this in between scenes to confusing/little effect. When the other doors are opened, light sometimes shines from them too. Several wooden chairs and a couple of tables are brought out maybe twenty minutes into the piece (90 minutes, no interval). The chairs are left out for a bit, thrown about gently, and then later stacked against the back wall. At another point, some colourful clothes fall from the flies. These sit around on the floor and then they’re put in a pair of cardboard boxes and taken off. (Design: Hannah Clark)

The cast is sort of a chorus, sort of not. There are 6 of them. The one who comes on first (Gweneth-Ann Rand, who is the only BAME cast member. I’m reasonably sure that’s not meant to be significant, which in itself seems very significant), sort of turns out to be the person who stands in for the person who has depression (if it’s one person) in 4.48 Psychosis. The others are variously, supplementary her, sitting in for “the doctor” (if it’s one doctor), and – what? – some people all milling about in a big white room with inadequate lighting, all dressed in the same dark grey slouchy cardigan, light grey slouchy jeans, and a black top.

And apparently there was a movement director! (Movement: Sarah Fahie) FUCK ME! I mean, I’m kind of fine with a meh design and largely catastrophic lighting (D.M. Wood). Both get an “only following orders” pass (I’m pretty sure I’ve seen the same sort of set used stunningly, for e.g.). But MOVEMENT DIRECTOR? Christ. What were her movement directions? “Slouch a bit more”? “Don’t forget to look depressed”? “For this bit, could you all shuffle over there and then throw some sort of a half-assed shape together”?

God knows what any of them were thinking this would look like/feel like/achieve, but I’m hoping it was something more than “destroying any chance of the audience not finding the overall experience entirely hateful.” Up to a point, I’d be willing to forgive on the grounds of insufficient time with director and actors, or just a naïve experiment with staging that was always doomed to fail. (We still believe in the right-to-fail, right?)  As long as Huffman understands that this was a disaster, then that’s at least progress for him as an artist, right? Even if I do bitterly resent having had to sit through it, and his appalling misunderstanding of what a stage is. However...

AT THE END, RAND STANDS ON A TABLE AND HANGS A THIN ROPE OFF AN INVISIBLE HOOK HANGING IN MID-AIR...

That’s an actual thing that actually happens in this staging.

I have NO IDEA how *at least that* wasn’t just stopped.

The luckiest man in the whole theatre is conductor Richard Baker (V.G.) who has his back to the stage the whole time.

So, yeah, that’s what it was like to look at; the abstract notions of literalism, nothingness and sheer fucking cluelessness fighting each other in a bland room. If it had tried *anything* and failed I would have hated it less, but it was so goddammed TIMID.

Oh, no, hang on, the video production was actually really good (Pierre Martin). It was only some words, but it’s always nice to see a bit of Helvetica, and these projected words actually displayed a better grasp of timing and style than any “live” element in the staging... :-/

But, there’s another element to talk about here (thank Christ). Two, maybe, since the play was still there – full text – too.

And this is where things perk up *a lot*.

4.48 – the text – is a challenging work. And I’m not sure I necessarily agreed with every single dramaturgical decision that the music made with the script (or, libretto, as I guess it is here), but the good definitely outweighs the not-my-personal-first-choice.

The issue – if you’re not familiar with the text – is that 4.48 is an incredibly “open” play. There are no designated characters, or even a specified number of people who appear on stage. On the page, each new speaker is designated by a dash. So it could be a dialogue all the way through, or – if you had the budget – each line could be said be a new performer. Sometimes the lines seem to resolve into recognisable dialogue. Most legibly, there are a number of sections that that seem to be a snappy back and forth between the/(a?) patient and her doctor. Venables’s solution with these is particularly ingenious – the patient is played by a massive bass drum, while the doctor is played by a succession of other percussive noises, starting off with a high-pitched striking of a metal pole, through the use of a saw, until, in the last-but-one exchange, the doctor herself (her “herself” anyway, at least by implication) is another bass drum. The rhythms of both patient and doctor vary. There are some terrific drum rolls of grandiose self-pity and virtually a beginning of ‘California Über Alles’-worth of combative resistance to analysis. Elsewhere, words or even sentences are represented by a single resonant beat. It’s both witty and respectful. Funny about depression in the same way that the text itself is. The actual words for these exchanges are projected on the boring white walls of the set (while the idiot director has placed two women on chairs facing each other on the stage miming out the sodding exchanges, but that’s easily ignored). The performance of these bits, by the two percussionists, was far and away the best “acting” in the piece too. Stylish, reserved, expressive, cool. Anything and everything that the singers had been prevented from being.

Also fascinating are the sections where parts of text are layered through white noise, or where almost pastiche Nyman-band music is used to underscore the farcical administration of anti-depressants, and their resultant side-effects and failures.

Harder to assess are some of the sequences in which Kane’s more bald, raw, poetic, declamatory style is delivered in modernist soprano+mezzo choruses, sounding a bit like the ‘Flower Duet’and the end of Act 1 of Lohengrin after being chucked into a blender by Ligeti. Hard to assess because *I think* that musically they’re pretty great, but the text itself is difficult to pitch right in English, and while it’s bound up in a staging that is genuinely train-wreck-catastrophic, it’s nigh-on impossible – in-the-moment – to disentangle the elements. Some of it just outright works and some of it needed something very different happening visually (much more or much less, ideally. Or even just something *intelligent*) to help shape it.

Beyond that, though, at its best Venables does precisely what any good dramaturg should do: give both a passionate and coolly analytical shape to the text, and a clear (post)dramatic journey through it. This was – oddly – perhaps the most linear and “narrative” reading of 4.48 I’ve yet seen. Here – thanks to the music – there was an incredibly detailed sense of a precise journey, and a real chance to re-hear/re-understand/re-preceive – as if anew in many cases – the meaning of what Kane wrote.

If I did star-ratings it’d be tempting to give this a 5/1 split. Basically, it’s like listening to something that could well be a work of near-brilliance while watching a slow walk-through of the worst student production of 4.48 Psychosis that you’ve ever had the misfortune to endure.

This is the thing: if you took the music away; *as a piece of theatre*, this would contravene the trades descriptions act. Utterly frustrating. For the love of God, someone take Huffman to see some theatre that makes sense of its etymology: θέατρον (théatron, “a place for viewing”). Either that, or only let him direct operas for the fucking radio.
Posted by Andrew Haydon at 12:02